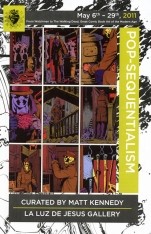 Batman, the Avengers, the X-Men and More Come Alive at Gallery 30 South

“Pop Sequentialism Ver. 2.0” is a second take on the first contemporary survey exhibition of published comic book art that took place seven years ago in 2011. The new limited engagement exhibition features rare, first presentation original 3D comic production art from the archives of Ray Zone, a comic book hall-of-fame 3D artist including his collaboration with Will Eisner on “The Spirit” and pages from “Sheena,” “Miracleman” and “the Rocketeer.” 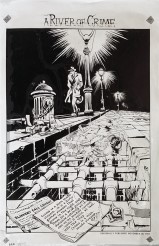 Every piece of art exhibited is unique, published artworks and rare examples of the biggest names in contemporary comics. The exhibition also marks the first appearances of important characters and scenes that were recreated in movies.

Anyone familiar with the world of comics knows that Ray Zone was referred to as the “King of 3-D Comics” and was a pioneer in converting flat images into stereoscopic images particularly in comic books. His art is rarely available and those seeking to collect the most unique and exemplary forms of comic book art scour the world over for pieces like those which will be on exhibit. Zone passed away in 2012. 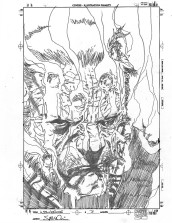 In addition to the exhibition highlights, Gallery 30 South will reveal the “Holy Grail” of comic book art and one that has been accumulating folk hero status for the last few years.

This artwork, a very early Batman preliminary page (1939-1940) is said to be definitive proof that Jerry Robinson co-created the “Joker” and that the clown prince of crime may have originally been part of Robin’s origin. This piece has never been displayed in a public setting before. Guests will also have the opportunity to purchase an out-of-print Pop Sequentialism catalog autographed by the curator, Matt Kennedy. Fans can listen to the Pop Sequentialism podcast on iTunes, BlogTalkRadio, Stitcher, and elsewhere.