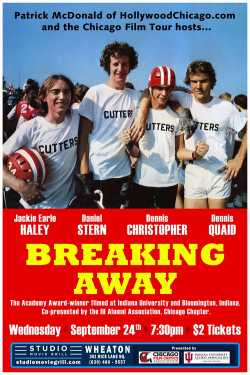 Would you believe that one of the best all American films ever made was directed by a Brit and written by a Serb?  Answer: yes–if you live in America! 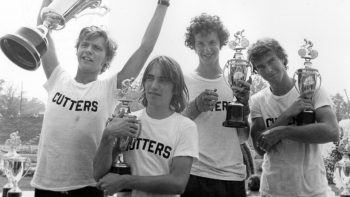 With unexpectedly lush cinematography and sophisticated orchestration for a low-budget slice of life story, BREAKING AWAY finds both pathos and passion in the everyday plight of four working-class high school graduates from Bloomington, Indiana poised on the brink of young adulthood.  Dave Stoller (Dennis Christopher) is the most flamboyant member of the group who conceives a love for all things Italian when he takes up competitive cycling.  Moonlight serenades, bowling alley brawls, and two exciting bike races follow as he spins his cross-cultural fantasy.

How do Dave’s parents feel about all of this?  His mother is more or less fine with it; his father, not so much.

“What are we gonna do about that boy?” wails Papa. “I don’t know, dear.  We could always strangle him while he’s asleep,” suggests Mama.

Laugh out loud lines such as these netted Serbian-born screenwriter Steve Tesich one of the most well-deserved Academy Awards for Best Original Screenplay yet given.  British-born director Peter Yates was also nominated for Best Director and the film itself was nominated for Best Film.  BREAKING AWAY did win the 1979 Golden Globe Award for Best Motion Picture – Musical or Comedy and many other honors.

What makes BREAKING AWAY stand so far out from the large pack of films it strongly resembles?  Possibly Tesich and Yates’ fresh outsider perspective that puts a soulful new spin on aspects of American culture so familiar to most of us that they often go unseen.

In Italy, it is not such a sin for men to sing, cry, shave their legs, or kiss their fathers.  Nor is it such a crime for them to work with their hands and build marvelous structures the way all the boys’ “cutter” fathers once did.  Renaissance men like Michelangelo all got their start in stone quarries centuries ago.

But in Bloomington, Indiana, the rich people go to college and the poor people stay cutters, or become used car salesmen like Dave’s father who must cater to the townie crowd.  Some must move to big cities like Moocher’s father to find better prospects.  Others seem destined just to drift indefinitely.

Dennis Quaid gives a stirring performance as Mike, the group’s alpha male whose hero is the Marlboro Man.  Yet this young cowboy falters just as much as the others en route to adulthood and suffers serious losses on some of his playing fields.

“You know, I used to think I was a really great quarterback in high school. I still think so, too,” says Mike. “Can’t even bring myself to light a cigarette, cause I keep thinkin’ I gotta stay in shape.

Tall, gangly Daniel Stern and short, skinny Jackie Earle Haley are a walking sight gag whenever seen together on screen as Cyril and Moocher.  Stern’s dialogue is off in a dimension all its own.

“We rednecks are few. . .college paleface students are many.  I counsel peace,” Cyril says after getting beaten up by some of the “palefaces”, expressing the law of the local jungle quite conclusively.

Distinguished film critics like Roger Ebert have declared BREAKING AWAY to be a national treasure.  It was screened at the Egyptian Theatre in Hollywood on the evening of Thursday, September 12th, 2019 to celebrate its 40th anniversary.  The screening was followed by a hilarious panel discussion with Daniel Stern, Dennis Christopher, Hart Bochner, and the 91-year-old Paul Dooley.

Dooley considers BREAKING AWAY to be his best film.  He is now working with former co-star Dennis Quaid on a new show called Merry Happy Whatever, an upcoming American dark-comedy web television series set to air on Netflix in November 2019.

Dooley and his errant screen son Dennis Christopher became very close during the filming of BREAKING AWAY and have stayed in touch over the past forty years.  Christopher said that he had to “take back” the character of Dave after he was made into a macho SATURDAY NIGHT FEVER spin-off.  The cherubic blond free spirit at the center of BREAKING AWAY was completely his own creation.  Christopher is half Italian and had spent some time in the country before taking the role of Dave, so felt very confident about his choices.

Paul Dooley identified Tesich’s script and Yates’ instincts for casting as the main secrets for this little film’s big success.  Dooley’s singular performance as Ray Stoller has been stamped indelibly upon the minds of all who saw the film in the 1970s and 1980s.  The actor knew he could nail the role after reading the first few pages of the script: “All I had to do was play MY dad!” 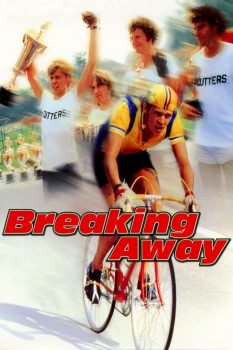 Thoughtful, well-crafted films like BREAKING AWAY can always hope to find a new audience in this regressive era of reality TV.  In a bicycle race, “breaking away” describes the often-desperate solo move a rider makes in a bid to win the race.  That need to individuate as adults will never end, and neither should the appeal of this film.