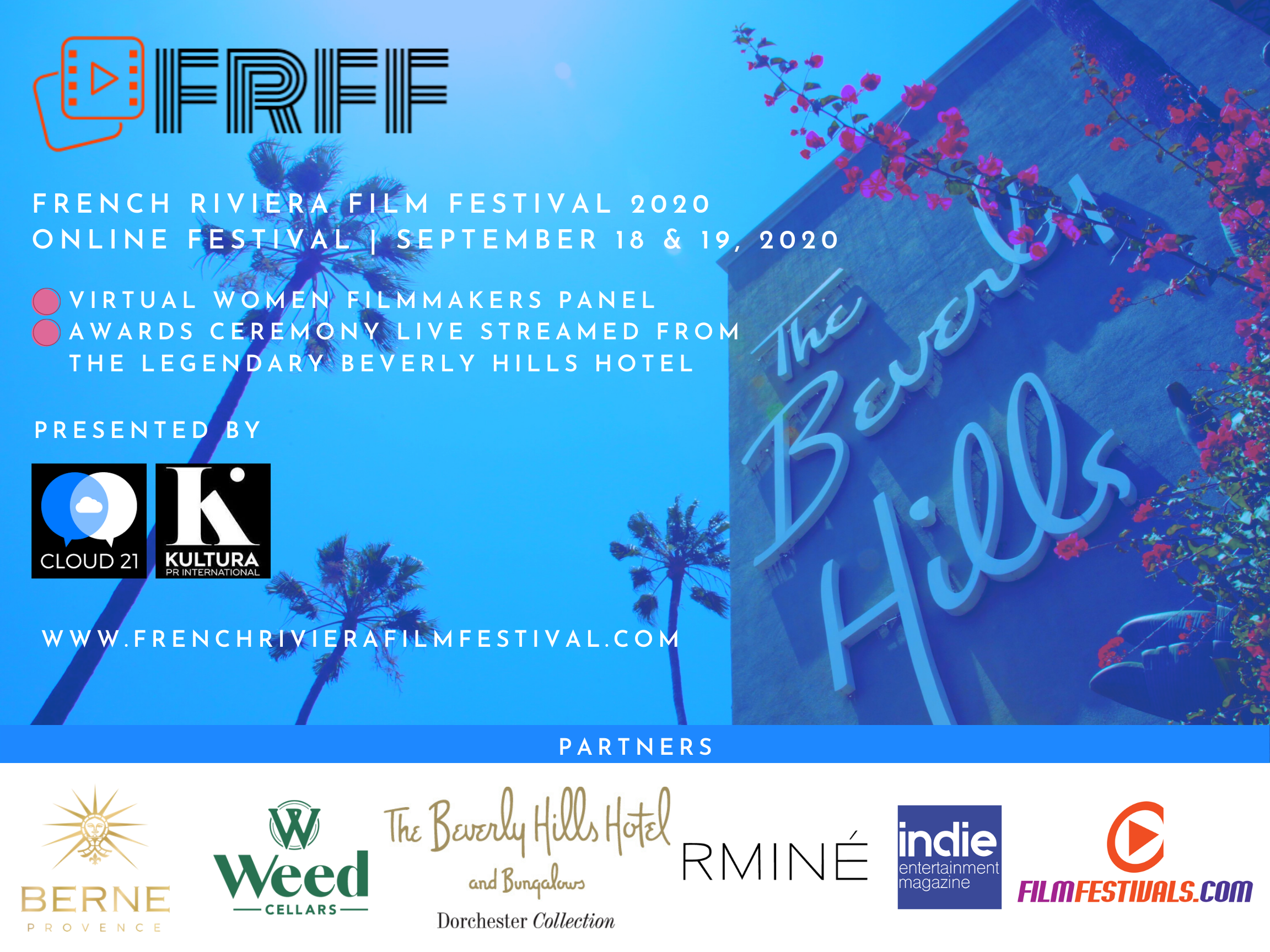 Los Angeles, July 16, 2020 – The second annual French Riviera Film Festival (FRFF) is pleased to announce the finalist shorts of the 2020 competition, the announcement was made today by festival co-founders Gotham Chandna and Nicole Goesseringer Muj.

The festival that celebrates short film and short-form content from around the globe will feature the works of filmmakers from more than 20 countries. The full list of finalists in the categories of  Drama, Comedy, Documentary, Sci-Fi/Horror, Animation, Experimental, Music Video and Fashion is available at: http://frenchrivierafilmfestival.com/finalists-2020/

“We’re extremely impressed with the quality of submissions once again this year,” comments Chandna.  “Recently, we signed a licensing deal with ShortsTV which will feature a selection of some of last year’s finalist and winning films on the channel in early 2020. We believe this year’s finalists will also be afforded this opportunity.”

Due to the uncertainty surrounding public events due to the pandemic, the festival, which usually is held in Cannes during the time period of the famous film festival,  this year will be held online on September 18 and 19, with screenings each day from 1 pm – 4 pm PST.  A special out-of-competition screening of  the comedy Characters, by director Kevin Asch (Holy Rollers) and starring Danny A. Abeckaser (The Irishman),  Lukas Haas (The Revenant) and Sara Foster (Barely Famous) will also be part of the program. More details regarding the screenings to be provided shortly.

“Film lovers who could not attend Cannes in person this year due to the global health crisis will be able to watch and enjoy the works by some of today’s most talented international filmmakers, all from the comfort of their own homes,” says Muj. “We’re delighted to partner with the legendary Beverly Hills Hotel, where we’ll hold our virtual gala awards ceremony.  Beverly Hills and Cannes are sister cities, so it’s really a perfect fit.”

As part of the program, FRFF will also feature a special virtual Women Filmmakers Panel to start off the festival, before the first day’s screenings.  The festival will culminate with a special ZOOM awards ceremony, to be held live from the iconic Beverly Hills Hotel, and to feature live and pre-recorded segments, celebrity hosts and guests, musical performances, and some surprises. RMINÉ will provide special couture fabric face masks for participants to wear during the live portion of the event.  Additional details regarding both online events to be provided shortly.

First launched last year during the time period of the Cannes Film Festival, FRFF recognizes and celebrates short-form content created for film, television, Web and all digital platforms. Each year, FRFF invites filmmakers from around the world to participate in the two-day, by invitation only event that includes screenings, gala receptions and a closing awards ceremony. Attendees and participants include filmmakers, industry executives, celebrities, media and influencers.

About The Beverly Hills Hotel.  The hotel offers the ambiance of a relaxed resort with lush, fragrant gardens, palm-lined poolside atmosphere, beautiful guestrooms, and public areas reminiscent of timeless Hollywood glamour. With an ideal location on Sunset Boulevard, steps away from Rodeo Drive, in one of the nation’s most coveted Zip Codes – 90210 – The Beverly Hills Hotel is whatever a guest wishes it to be. It can be a place to see and be seen, to catch glimpses of famous faces, or to revel in splendid luxury.

The hotel features 210 guestrooms and suites, spread among 12 acres, including private historic bungalows with a residential feel. Its popular dining options include the iconic Polo Lounge, vintage Fountain Coffee Room, Bar Nineteen12 and the Cabana Cafe. A Spa is also offered, in addition to its legendary pool and cabanas. With superlative service, a location offering privacy in the heart of a city, and enduring and dramatic beauty that, thanks to a recent restoration that remained faithful to the Hotel’s architectural and interior design traditions, The Beverly Hills Hotel is more captivating than ever.