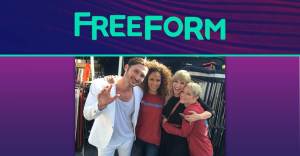 The World Premiere of The Sweepings’ New Music Video ‘In Too Deep,’ Directed by Nikki Reed (‘Twilight’), Posts at 10:00 p.m. EDT Tonight on ‘The Fosters’ Facebook Page

Fans will also get an exclusive first look at the band’s music video premiere of “In Too Deep,” a song featured on tonight’s episode of “The Fosters.” The music video, directed by Nikki Reed (“Twilight,” “thirteen”), will be posted on “The Fosters” Facebook page on Monday, August 29, at 10:00 p.m. EDT.

Winner of a Television Academy Honors Award and GLAAD Media Award for Outstanding Drama Series, “The Fosters” is executive produced by Jennifer Lopez, (“American Idol,” “What to Expect When You’re Expecting,” “The Back-Up Plan”) and created by Bradley Bredeweg and Peter Paige (“Queer As Folk”), who also serve as executive producers and writers, along with Joanna Johnson (“The Bold and the Beautiful,” “Hope & Faith”).

About Freeform (the new name for ABC Family)

Part of the Disney|ABC Television Group, Freeform is distributed in 94 million homes. The network connects to audiences and goes beyond entertainment with bold original programming and immersive social engagement. The network delivers a unique mix of quality original and acquired series, plus fan favorite movies and the holiday events “13 Nights of Halloween” and “25 Days of Christmas.” The Freeform app is a service that allows viewers with participating TV subscription services access to 24/7 live viewing of the network, as well as continued on-demand access via a wide array of devices.