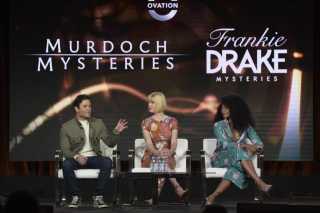 Pasadena, CA (The Hollywood Times) 6/16/19 – What’s it like, theoretically, to be the first female private detective in 1920’s Toronto? Lauren Lee Smith plays the title role in the Frankie Drake Mysteries, a drama series out of Canada, which premiered in late 2017. And it sets out to answer that question with heart, intellect, and an eye for detail.

Smith sat down with a panel of her peers and costars at a Television Critics Association panel, and talked about what it’s like to play Drake. According to Smith, it goes beyond simply being the “first” at any given career. It’s about challenging gender roles on a much larger scale.

“You know, it’s these women who, in the early 1920’s are sort of going against all odds and opening up the very first female private detective agency,” she said. “And doing things that the women at that time weren’t necessarily doing; like working and riding motorcycles, and solving cases and crimes, and shooting guns.”

Chantel Riley, who plays Drake’s partner Trudy Clarke, said the show’s setting also has a lot to do with its appeal. “I think Toronto has a lot of history, and I believe that we do, actually, have a lot of infrastructure that’s still in set from those times,” she said. “So it’s great to use as a backdrop, and I think Toronto’s, like, the perfect backdrop to go back into time to 1920’s or 1800’s, even.”

Yannick Bisson, the title character in the Murdoch Mysteries, who was also present at the panel, agreed heartily. “Yeah, certainly at the turn of the century, Victorian era, it was a hub,” he said.

Bisson felt that the Murdoch Mysteries have lightened up a bit, since the show’s inception. “I think tone-wise we’ve lightened up a little bit,” he said in response to a related question from the audience. “We’re taking some more chances just by the fact that, you know, we’re able to. We’ve made quite a few episodes now that were just for us. They’re a little bit whacky, a little bit outside of the canon. But I think, also, as a character over time mine started out fairly buttoned down, reserved, perhaps, judgmental, whether it be because of science or religion, and a lot of those layers have slowly been peeled off, and you’ve got a character that’s probably a little more empathetic and has had to adapt to his surroundings. So, as he is somewhat the eyes of the audience he is kind of the audience’s vehicle. He has to grow and evolve, and probably lighten up a little bit.”

Naturally, the next question would be what differentiates the two shows. “Women are fighting to vote, you know, we’ve got guns and stuff,” said Riley. So, it’s just like a whole different era that just kind of makes us slightly different from what’s going on with Murdoch.”

As for becoming their characters, Smith says the costumes are a major inspiration. “You know, you walk differently. You move differently with the costumes of that time. So it’s a gift.”

“You often have no choice, added Bisson. “You have to.”  “It sort of immediately puts you in a different head space and a different zone, which I think is a really cool thing about doing a period piece,” said Smith.

Riley felt that the sets also help in transporting the cast members back in time. “Well, the sets, like Lauren said, they definitely help to transport us into that time,” said Riley. “You know, so we even have some pieces that are pretty much from that era that they were able to find, and to dig up which is really cool. So it definitely helps to transport us.”

In fact, for the premiere in Toronto, everybody (including the fans) dressed up in 1920’s fashions. “So you had the flapper dresses and the feathers in the hair and stuff, so they were all really excited for our show and they still are,” said Riley. “So we have great interaction with our fans as well.”

Both shows, it goes without saying, are remarkably entertaining, true to the era, and incredibly intelligent. It’s some of the best drama currently out of Canada. Stateside, they air on Ovation. Check your local listings, and learn more about the shows at https://www.ovationtv.com/frankie-drake-mysteries/