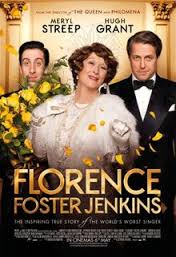 Hits the Right Notes–
by Dr. Laura Wilhelm, LauraWil Intercultural
Hollywood, CA (The Hollywood Times) 8/1/16 – On the evening of Monday, August 1st, 2016 this reporter attended a special advance screening of Stephen Frear’s new film FLORENCE FOSTER JENKINS at the ArcLight Theater located at 6360 West Sunset Boulevard.  FFJ hilariously stars Meryl Streep as the musically challenged Ms. Jenkins and Hugh Grant as her common-law husband, St. Clair Bayfield, whose ardor blows hot and cold.  It opens in theaters on August 12th.
Set in 1940s New York, FLORENCE FOSTER JENKINS is the true story of the legendary New York heiress and socialite who completely lacked vocal talent but more than made up for this with her steadfast belief in the beauty of her own awful voice.  Bayfield was determined to protect Jenkins from the truth at all costs. 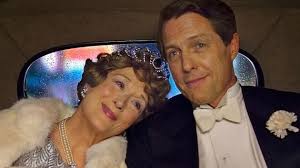 Jenkins sang her one and only Carnegie Hall concert a month before her death in November 1944 at the age of 76 to a capacity audience that included actress Tallulah Bankhead, composer Cole Porter, and Lily Pons, a famed soprano who could actually sing.  “Some may say that I couldn’t sing, but no one can say that I didn’t sing,” says Jenkins on her deathbed.

Incidents from Jenkins’ life also became the stuff of legend.  While riding in a taxi that collided with another car, Jenkins let out a scream and then realized that she could sing a higher F than ever before.  She promptly sent the cab driver a box of expensive cigars.
Jenkins had in fact been a child prodigy pianist who performed all over the state of Pennsylvania where she was born and even at the White House during the administration of Rutherford B. Hayes.  She ended up in Philadelphia, Pennsylvania with her first husband, Dr. Frank Thornton Jenkins, from whom she contracted syphilis before meeting St. Clair Bayfield.

Some of Jenkins’ artistic lapses may have in fact been caused by the deterioration of her central nervous system brought on by syphilis, which was being cured with poisonous mercury and arsenic treatments prior to the discovery of penicillin.  On recordings Cosmo McMoon can be heard making adjustments to compensate for her various performance errors.  Jenkins often compounded these problems by choosing technically challenging songs far beyond her vocal range.
Meryl Streep and Hugh Grant establish an easy and charming rapport as Florence Foster Jenkins and St. Clair Bayfield with able support by Simon Helberg as Cosmo McMoon.  The film’s catastrophic musical sequences are intercut with period dance numbers that are much more capably performed. 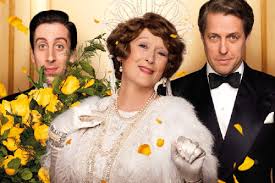 This reporter was joined by her husband at the screening one day after their wedding anniversary on July 31st.  They agreed that the more tragic elements in this tale darkened its central hymn to over the top talent development.
However, the name of Florence Foster Jenkins definitely deserves to be resurrected and revered by a new generation of culture vultures who know the joy is always in the journey.  Enjoy the wild and raucous ride!