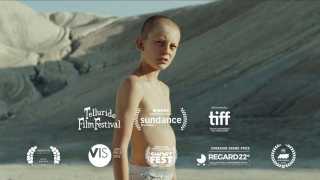 This film starts out seemingly innocently. Two young boys playing with old abandoned passenger train cars. Being boys.  Then they move to the hulk of the engine, rusted, beaten, worn. They are keeping score as to which boy one-ups the other boy. 2 to 2!

Then, while in the old train yard, the one boy sees a fox. He tries to tell his friend, it’s real but his friend laughs it off thinking it’s another game.  They run to an old surface mine and have fun throwing stones at the large funnel above them. But a huge dump truck comes barreling down towards them terrifying the boys causing them to run towards the abandoned quarry where mining was once done.

My question is, what was the truck all about and why was there no driver? Perhaps the driver was in a hurry to perform a specific task and was “rushing” before there was an accident. I don’t know, but the truck forced the children down into the quarry. Perhaps, the metaphor of “…sink into a seemingly innocent power game…” foretells the reason for the truck. Mother Nature “may in-fact” be the truck. I don’t know, I’m only speculating here but it now makes sense.

I applaud Jeremy Comte’s effort here and although the story leads you down a path of a potential tragedy, it may in-fact be ‘happy’ as Fauve means “Wildcat” in French.  I just took a chance and Googled, “Wildcat Heavy Dump Trucks” and sure enough, there’s that truck. Perhaps, the wildcat chased the kids into the quarry and was the catalyst for why I felt sad but the fox in the story, was the truth that the boy was trying to tell the survivor of their game.  In the end, I guess the statement remains true: “It’s not nice to fool with Mother Nature.”