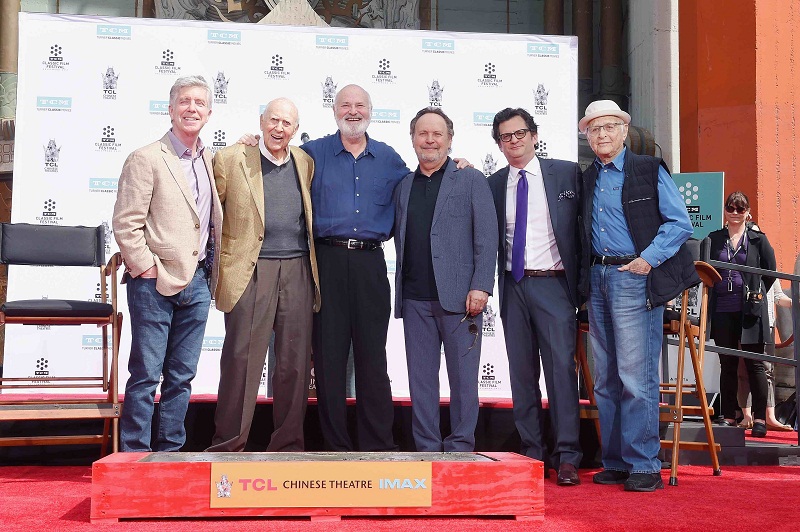 Hollywood, CA (The Hollywood Times) 4/11/17 – “The thing that is most important for me and why this means so much is , first of all we are the first father and son to do this at the same time, but my father was my idol and I looked up to him. He stood for everything I wanted to be in life.  When I was a little boy of eight year old, I went to my Mother and wanted to change my name.”

Rob Reiner told the fans, photographers, reporters and his family and friends that gathered in front of the TCL Chinese theatre before he and his father Carl Reiner put their hands and feet into wet cement, last Friday at the TCM Classic Film Festival in Hollywood.

Rob Reiner went on to say that his mother when to his father and told him that Robby wanted to change his name.  His Dad was all upset that this poor kid wants to change his name because he has to live up to the shadow of Carl Reiner’s son and his dad went to him and said “Robby, what do you want to change your name to?  Rob said “Carl!”  The audience laughed as well as Carl Reiner.  Rob Reiner also said “we should put out bald heads in the cement, we both have bald heads, and that has never been done before, in the cement.”

Rob said, “here we are Carl and Carl and we are going to be putting our hands in cement and we don’t have to dance, because I saw Tom Bergeron and thought we had to dance or something.  And Norman Lear is here and I want to say something to him, because he was like a second father to me since I was seven years old and my family is here.  My wife, and children. I won’t be here without him (pointing to his father Carl) having sex with my mother and you being supportive of me and you (pointing to his children) wouldn’t be here if I didn’t have sex with your mother.  TMI. So let’s do this.

Carl Reiner said “well what do you thing, can we talk together, I’ve known this guy for almost all of his life.  I want to say one thing about Rob, he has a photographic memory, he really does. This has nothing to do with the fact that he is my son, with my one hand, I have favorite movies I watch, one is The Count of Monte Cristo, second is Random Harvest, a romantic movie and the other one is The Princess Bride, and time you feel low, put on The Princess Bride and you will go away smiling, My name is Inigo Montoya! You killed my father! Prepare to die!”

Billy Crystal paid tribute to both Carl and Rob Reiner, first he started off with “Do you believe in fate, yes, okay, this starts in the 1975, I was a very young comedian at the Comedy Store and in the audience was Carl Reiner and the incredible Norman Lear, they came outside and I was a new kid and I had not been on television and they couldn’t have been nicer. Carl actually introduced himself to me he said “hi I am Carl Reiner” and I said “What do you do? (Laughter)  Two weeks later Norman Lear, himself, called my apartment in Long Island and said there is a part for you in “All in the Family” can you get out here to play Rob Reiner’s best friend?

Two weeks later I’m on the rehearsal stage with Rob, Sally and these amazing writers, great director Paul Bogart, and Norman kept checking in if everything is okay.  I was watching Rob, and the seeds of what would become a great director, working on the script with us, being very inclusive with everybody, especially me, who was a newcomer and he was asking “what do you think, how can we make this joke work better?’  The show did very well, and I said we just played best friends, why don’t we keep that going, so we have throughout all these years.

That led to me being in some of the most iconic movies of our time, that Rob is responsible for.  If the director has one or even two movies that lasted the test of time, that is amazing.  I happen to be in a few that I am so proud of, starting with “this is Spinal Tap” a little part that I play, a mime, named Morty, who was also a caterer, and his company was called “Shut up and Eat” there is line people keep saying to me, Mime is money.

That led him to trust me with the plum parts of all time, Miracle Max in the “Princess Bride.”  (Billy Crystal is waving and says “Have Fun Storming the Castle”) laughter and applause.  This is a movie, over time that has become families “Wizard of Oz” They watch it.

A few years ago, we had a screening at the Lincoln Center and it was like people were yelling the lines out with the actors applauding their entrances.  It was very moving and in that movie I played what was described as the two hundred year old Jewish wizard that lived in the woods, which to me meant type casting.

That lead to Rob trusting me to the part of a lifetime Harry Burns in “When Harry Met Sally.”  An amazing script by Nora Ephron, phenomenal cast that Rob put together, the incredible Meg Ryan, Bruno Kirby, Carrie Fisher, who is no longer with us, but will always be with us in that amazing movie.”  (Applause) “It was Rob’s ear, how do we tell the jokes right, how do we just make it effortlessly, the music of the writing, listening to it, trusting, all kinds of ideas came in and he always have the perfect answer as a director, let’s try it!

There was humor throughout this great hand and footprint ceremony from both Carl and Rob Reiner, who could just see how happy they both were to be getting their hands all wet with cement.  We were all very lucky to be part of history being made in Hollywood that morning.  Check out the pictures from the event.