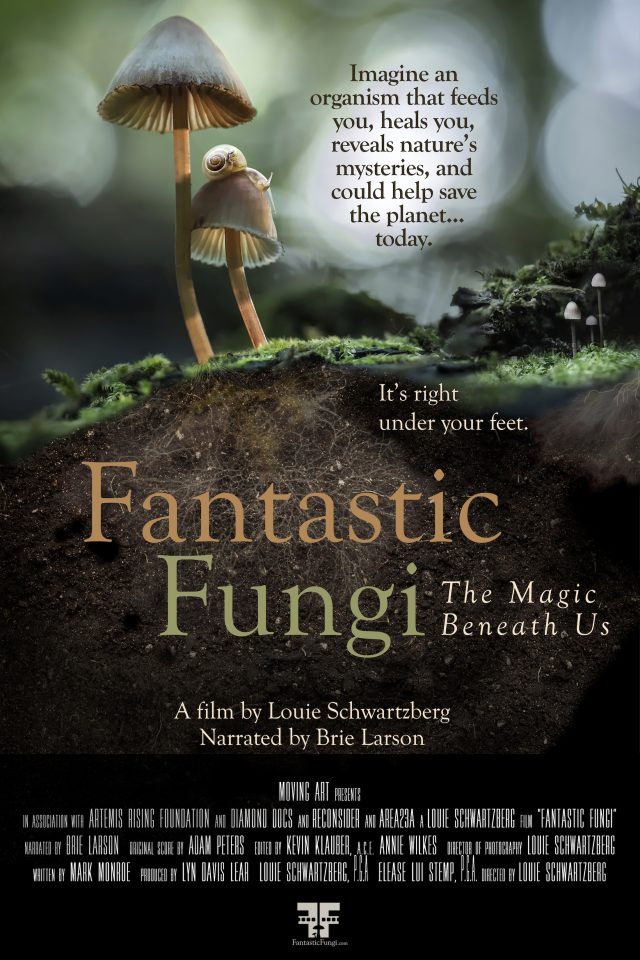 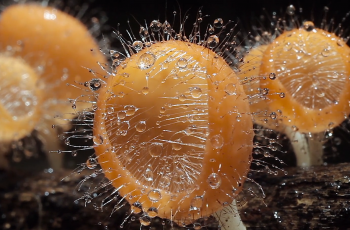 A film by Louie Schwartzberg (Netflix’s “Moving Art”, Wings of Life for Disneynature, and Mysteries of the Unseen Worlds 3D Imax for NatGeo still playing in theaters)

When so many are struggling for connection, inspiration and hope, Fantastic Fungi brings us together as interconnected creators of our world.

“Journey into the world of Mushrooms and Fungi for below our feet lives the heart and soul of our planet in the incredible mycelial network, of life!”

Fantastic Fungi, directed by Louie Schwartzberg, is a consciousness-shifting film that takes us on an immersive journey through time and scale into the magical earth beneath our feet, an underground network that can heal and save our planet.  Through the eyes of renowned scientists and mycologists like Paul Stamets, best-selling authors Michael Pollan, Eugenia Bone, Andrew Weil and others, we become aware of the beauty, intelligence and solutions the fungi kingdom offer us in response to some of our most pressing medical, therapeutic, and environmental challenges.

(Note: Some of the text is direct verbatim from the film because it’s so cool)

Fungi and mushrooms represent, rebirth, regeneration, rejuvenation. Nature is intelligent. We lack the ability to understand nature but the fact that we lack the language skills to communicate with nature does not impugn the concept that nature’s intelligent.  Rather it speaks to our inadequacy for communication.  If we don’t get our act together in commonality with that organisms that sustain us today, not only are we destroying these organisms, but we will destroy ourselves. 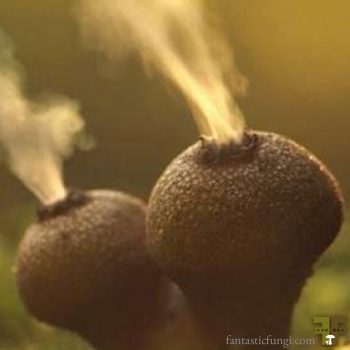 Mushrooms/fungi are not like an animal and not like a vegetable but somewhere in between. The fungus is its own kingdom with over 1.5 MIL species of fungi discovered thus far. That’s six times more than plants.  Of that, about 20,000 produce mushrooms and they come in an incredible diversity of shapes, sizes, colors and lifestyles.  There are even bioluminescent mushrooms that look awesome at night.  Mushrooms are associated with death and decay and they kind of at the very end of stuff and at the very beginning of life as well.

“The difference between plants and mushrooms is the plants strive to get your attention. Mushrooms don’t give a shit… really!”  There is a huge group of mycophiles that get together and have festivals and eat them and understand them in a deeper way. 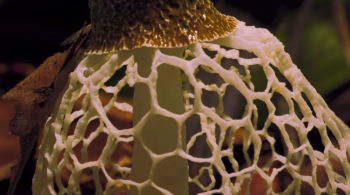 If we didn’t have mushrooms, there’d be this huge buildup of decay and it would choke the earth.  Fungi has the ability to break things down.  These rotter’s break things down that’s carbon based.  Mushroom spores break hydrogen carbon bonds and they are used to rot a pile of petroleum (oil) waste. They are the fruiting in a body of waste. They are the apple. The branch and re-branch and they create a mycelium. There are more mycelium networks than your mind can imagine. Think about it. There are over 300 miles of fungi under every footstep you take and that’s all over the world!

They form this massive link all over the old growth forest.  The mycelium shares the same network design as a computer network. They talk to each other using the mycelium as the passageway.  Trading from one tree or planet and giving to another.  “We never thought that plants can recognize their own kin through the mycelium. The trees are supporting the younger ones… this really happens! This couldn’t happen without fungi.”

Paul Stamets was a logger in his early life and now he participates not only in seeking out new and exciting strains of mushroom but in cutting down trees to infuse them with Shitake Mushroom spores.  In a year, they’ll blossom.  Paul says, “Cutting the trees, thins it out and accelerates regrowth and is good for the forest.”

In the lava of South Africa was found a mycelium network 2.4 billion years old!  The mycelium chose to remain underground and humans evolved to form in a sack.  When the cataclysmic extinction events occurred, the fungi thrived and survived. Mycelium is the mother of us all as we are more closely related to fungi than to apes.

The oldest and largest fungi lives in Oregon.  It is thousands of years old.  Fungi have spores not seeds and when they land on something they can eat and reabsorb the nutrients and move on. The fungi releases millions of spores. They correct everything on earth, they support life, they carry life and they will be here after we’re long gone.  Climate change is one of the biggest threats to our future world.  C02 is what plants photosynthesize and they put 70% of the carbon below ground and trade that for nutrients and line the fungal wall stabilizing carbon stored for thousands of years.  This is fantastic and is something that we haven’t a clue about. Is this expanding consciousness or altered states of consciousness? You decide. 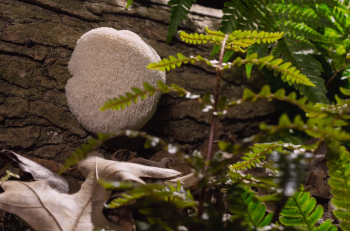 There are 22 Primates, 23 including us, consume mushrooms on Earth.  There are those called Magic Mushrooms and these wonderful psychedelic magical wonders open up the floodgates within our brains. You see music and hear colors…right on, man! The mushrooms were like a software to program this hardware we call us. In early hominids, they were used to create neural structures for something like, oh I don’t know, language perhaps.  It’s made us what we are.

Paul Stamets had an experience with magic mushrooms and took 10 times the amount of what he should have taken. He consumed the entire bag about 50 grams.  What that experience did for Paul during a storm, up in a tree, was so profound you have to see how he explains it to believe it. Before that, Paul had a stuttering problem most of his life and nothing he could do with speech therapy could help. He found himself staring at the ground and all he saw was his shoes and mushrooms. Let’s just say, that “magic” did something to Paul.

Alexander Fleming discovered Penicillin in 1935.  Fast forward to 1945 when a grocer found a rotting cantaloupe with a hyperproducing form of the Penicillin fungi and it was credited for winning WWII because the Germans and Japanese didn’t have this. How nice of those little fungi huh?  There has been a long tradition of using mushrooms in eastern medicine but not in western medicines and as of 1999 Johns Hopkins is now leading the way with 9 different studies. 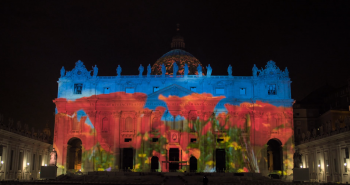 Of note: Star Trek Discovery’s spore drive uses the space mycelial network to transport the Discovery thousands of light years in the blink of an eye. Chief Engineer and Discovery’s Science Officer LCDR Paul Stamets (Anthony Rapp) may have been named after Paul Stamets, the owner of Perfect Fungi in Olympia WA.

Here’s a quote from startrek.com about Paul Stamets (Anthony Rapp)

Lt. Commander Paul Stamets is the U.S.S. Discovery’s science officer and chief engineer and was the partner of the late Dr. Hugh Culber. Brilliant, awkward, outspoken and not keen to make friends, his expertise is astromycology, meaning he knows more than anyone about space mushrooms and the vegetative part of a fungus called mycelium. Stamets collaborated with Lt. Straal, conducting research to “get to the living heart of the universe, the veins and muscles that hold our galaxies together.”

How coincidental. Someone at Star Trek did their research, hmm?

There are so many unusual mushrooms, one being the Lions Maine Mushroom. It tastes like Lobster or Shrimp when you cook it and it was found that this mushroom stimulates nerves to regrow. It’s non-toxic and can be used to treat Alzheimer’s. How about that?  The human brain has the ability to regrow and can cause neurogenesis (New Growth). It just needs the right compounds to help it.  Today, there’s been a resurgence in use of Psilocybin and Psilocin for cancer therapy. From a single experience not like Prozac or Lithobid, that you take every day to combat depression, mania and bi-polar disorder, this mystical and transcendental experience can’t make money, because the core experience is about 2 to 3 pills, take once for months of relief.  That’s the conundrum.  Big Pharma doesn’t see a benefit when in fact, they could put billions in research for mushrooms instead of poisoning us with the 16 side effects that could kills us. Planet Earth knows how to take care of her children and we need to do more to find out how.

For example: The Turkey Tail Mushroom has been known to reverse breast cancer. Paul Stamets’ 84-year-old mother lives still to testify to this fact.  From the ancients to the Mayans to the current day, mushrooms can be the link to helping humanity on our journey. When you die, we will all die at some point, we will decompose, and we become part of the gazillions of branches of the Mycelium network. We will live forever and if people tell you otherwise, remember that when you meet them in the world of the Mycelium network that you wave and say, “Hi! Remember me from above?”

©, ® & ™ belong to Star Trek and StarTrek.com which are the property of CBS/Paramount/ Viacom and are only used here as a reference to the obvious.