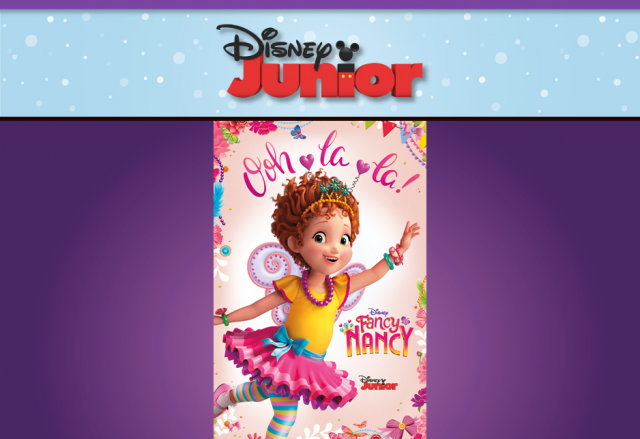 The premiere of “Fancy Nancy” stands as TV’s #1 telecast of the week, to date, among Girls 2-5.

Broadway sensation Mia Sinclair Jenness voices the role of six-year-old Nancy in Disney Junior’s animated series “Fancy Nancy,” about a high-spirited young girl whose imagination and enthusiasm for all that is exquisite transforms the ordinary into the extraordinary.

Jenness began acting at the age of six and became the youngest actor to play Little Cosette in the Broadway and national tour productions of “Les Miserables.” She later went on to star as Matilda in the original Broadway tour of the Tony Award®-winning “Matilda The Musical.”

Jenness served as the understudy for Gretl in “The Sound of Music Live!” Her additional credits include “Orange Is the New Black,” “Hotel Transylvania 2,” “Sesame Street,” “Blue Bloods” and “Skyward.” She stars opposite Christina Ricci in the upcoming film “Ten Things We Should Do Before We Break Up.”

Alyson Hannigan voices the role of Claire Clancy, mom to six-year-old Nancy, in Disney Junior’s animated series “Fancy Nancy,” about a high-spirited young girl whose imagination and enthusiasm for all that is exquisite transforms the ordinary into the extraordinary.

Born in Washington, D.C., Hannigan began appearing in commercials at the age of four and then moved to Hollywood at age 11. She soon landed her first major film role in “My Stepmother Is an Alien,” alongside Seth Green. She is best known for her roles in the Emmy® Award-winning series’ “Buffy the Vampire Slayer” and “How I Met Your Mother,” with additional acting credits including the “American Pie” film franchise, “Angel” and “Veronica Mars.” Hannigan can currently be seen in “Penn & Teller: Fool Us.”

Hannigan attended California State University, Northridge, where she earned a degree in psychology. She currently resides in Los Angeles with her husband, “Buffy the Vampire Slayer” co-star Alexis Denisof, and their two daughters.

Emmy®-nominated actor Rob Riggle voices the role of Doug Clancy, father of six-year-old Nancy, in Disney Junior’s animated series “Fancy Nancy,” about a high-spirited young girl whose imagination and enthusiasm for all that is exquisite transforms the ordinary into the extraordinary.

Riggle is best known for his work as a correspondent on the multiple Emmy Award-winning series “The Daily Show.” His additional film and television credits include the recent feature film “12 Strong,” Emmy Award-winning series “Modern Family,” “The Hangover,” “New Girl,” “21 Jump Street,” “22 Jump Street,” “Step Brothers” and “Saturday Night Live,” among others. He also hosts a “Riggles Picks” podcast with Sarah Tiana and can next be seen in the upcoming films “Midnight Sun” and “Night School.”

Riggle was born in Louisville, Kentucky and later attended the University of Kansas where he graduated with a Bachelor of Arts in Theater and Film. He went on to earn a Master of Public Administration degree from Webster University.

In 1990, Riggle joined the Marine Corps, at the age of 19, and served in various countries including Liberia, Albania, Kosovo and Afghanistan. Lieutenant Colonel Riggle recently retired from the Marine Corps Reserve after serving 23 years total; nine years active duty and 14 years in the reserves, earning over 22 medals and ribbons.

Riggle hosts an annual golf tournament benefitting veterans and the Semper Fi Fund and enjoys spending time with his wife and two children.

Spencer Moss voices the role of JoJo Clancy, Nancy’s three-year-old younger sister, in Disney Junior’s animated series “Fancy Nancy,” about a high-spirited young girl whose imagination and enthusiasm for all that is exquisite transforms the ordinary into the extraordinary.

Born in Chicago, Illinois, Moss began her acting career when she was three years old. At the age of five, she landed a role in the feature film “American Fable” and, soon after, made her television debut on “Chicago P.D.” Her additional credits include ABC’s “The Mayor,” “The Stolen” and “The David S. Pumpkins Halloween Special.”

Krista Tucker developed and serves as story editor of Disney Junior’s animated series “Fancy Nancy,” about a high-spirited young girl whose imagination and enthusiasm for all that is exquisite transforms the ordinary into the extraordinary. A writer on many Disney series, Tucker is an Emmy® and Annie Award-nominee for her work as story editor on “Sheriff Callie’s Wild West.”

After growing up on a farm in New Jersey and studying ballet for over 20 years, Tucker earned a Bachelor of Fine Arts in Theater from the University of Southern California. She currently resides in Los Angeles.

Jamie Mitchell began his animation career working on Disney’s first major animated television series, “Adventures of the Gummi Bears,” and most recently served as executive producer and director of Disney Junior’s Emmy® Award-winning animated series “Sofia the First.” His additional Disney television credits include the primetime special “Winnie the Pooh and Christmas Too,” for which he received an Emmy nomination, the Emmy Award-winning series “Aladdin,” the Humanitas Award-winning series “The Little Mermaid,” “Duck Tales,” “Chip ‘n’ Dale Rescue Rangers,” “Talespin,” “The New Adventures of Winnie the Pooh,” as well as the direct-to-video feature “Mickey’s House of Villains” and the theatrically released “DuckTales: The Movie.”

Mitchell produced, directed and developed such popular Nickelodeon shows as “Hey Arnold,” “Fatherhood” and “Planet Kate,” and was responsible for directing the animation for Universal Studios’ 3-D Jimmy Neutron theme park attraction. His additional credits include the primetime special “Whale of a Tale” and Queen’s music video “These Are The Days of Our Lives.”

A native of Los Angeles, Mitchell studied film at Loyola Marymount University. He currently resides in Manhattan Beach, California with his wife and two daughters.

Amazon to Reboot “A League Of Their Own”; Hulu Cancels “High Fidelity”