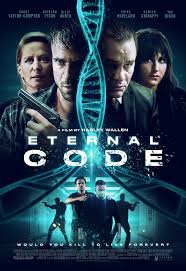 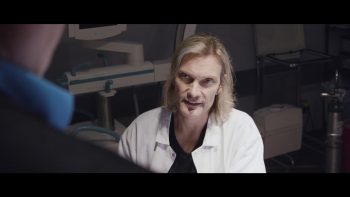 Hollywood, CA (The Hollywood Times) 9/5/19 – At first glance, Wednesday evening looked like a typical bustling premiere at Hollywood Boulevard’s legendary Chinese Theater. 6 PM press check in. 6:30 red carpet. 7:30 screening and and after party at The Pig N Whistle. But the world premiere of Eternal Code was distinctly its own experience.

The film’s explosive plot doesn’t leave much room for boredom, either. After a revolutionary invention with far reaching consequences hits the scene, Bridget (Erika Hoveland) discovers a damning flaw in the company with which they’ve partnered to develop a prototype of a figurative fountain of youth.

Bridget pulls back from the original deal; too late to realize the lengths they will go to in order to keep it in place.  After her family’s kidnapped in the crossfire, all hopes settle on their teenage daughter, Miranda (Angelina Daniella Cama) and her reluctant allies Corey (a suicidal military veteran played by Damien Chinappi) and prostitute Stephanie (Kaitie Wallen).

Aside from strong direction and a solid screenplay, the film especially benefits from strong performances by its ensemble cast, particularly by noted actor Richard Tyson as Oliver, Scout Taylor-Compton as Charlie, Erika Hoveland as Bridget, Billy Wirth as Mark, Harley Wallen as Sam, Vida Ghaffari as Nikita, Kaiti Wallen as Stephanie and legendary actor Mel Novak as Mr. Pomeroy.

The film is already a festival darling, it’s it’s festive premiere only added to the buzz surrounding it. If you were unfortunate enough to miss it, you can learn more about Vision Films and Eternal Code at http://visionfilms.net/Details.aspx?id=4780f2c5-ee44-e911-9492-0e563b5fb261