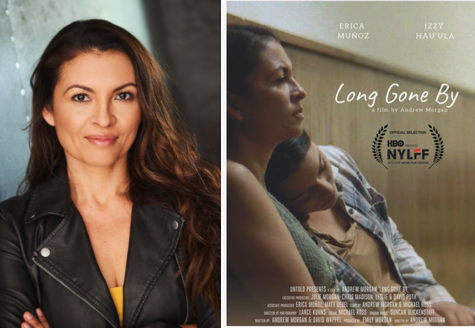 Los Angeles, California (The Hollywood Times) 08/23/2020 –Erica stars as ‘Ana Alvarez,’ a single mother from Nicaragua living in Warsaw, Indiana with her teenage daughter ‘Izzy.’ When a routine check leads to a deportation order, ‘Ana’ risks everything for a last chance effort to ensure her daughter’s college education is financially secure. “Long Gone By” originally premiered at the New York Latino Film Festival and is now streaming on all HBO platforms.

You have been in “Jericho,” CBS’s Numb3rs, and Grey’s Anatomy, playing Wilmer Valderrama’s sister. What do you look for in a role? Was there any synergy with these characters?

Without realizing it, I think I’m attracted to strength. There’s a commonality of resolve and the general spirit of a fighter in every role I’ve played. I find myself drawn to women who don’t take no for an answer and who aren’t afraid to say what they mean. I’d like to think I inherited some of that fighter spirit from my mother and bring it to my work.

Tell us about your role in “Indebted” with Fran Dresher.

I was so very lucky to get to do two episodes of Indebted which has since been canceled. I played a mom at the school where the main characters’ kids attend. Another very loud, very opinionated woman.

Without a doubt, my kids. They are two of the smartest, kindest, most capable kids.

You play a lead role in the HBO feature film “Long Gone By.” What intrigued you about this project?

Ana is a strong, hardworking single mother trying to make a way for her daughter and herself. She’s faced with such an unthinkable situation and backed into an impossible corner. I was intrigued and excited to tell the story of a complicated woman. So often men get to play layered and challenging people and women, particularly Latinx women, are stuck in caricatures. Ana is such a complex and interesting woman and reminded me so much of my own mother. Added to the complexity of the role was my faith and trust in Andrew Morgan, the director, who I had worked with a few times and who very early on invited me into a producer role as well.

What the press is saying…

“A love letter to humanity… Capturing the essence of our current immigration policies and impact, this small yet powerful film packs quite a gut punch.” –Corriente Latina

“At the film’s center is this surprisingly tender story of sacrifice and motherly love… Andrew Morgan’s gut-wrenching drama Long Gone By is another production with its heart in the right place and its mind on the struggles of undocumented people trying to survive in a system built to keep them excluded.” -Remezcla

Do you have a favorite moment on set?

One of my favorite moments was getting to see my real-life niece, Issy, on her first day in her very first role. Watching her go all-in with no fear was such a gift. My husband, Jason Klaus, who is also Assistant Director on the film, was the one who suggested we look at Issy for the role despite no experience so it was a real moment of joy for us to see her thrive.

Did this role challenge you as an Actress?

In the sense that it made me come face to face with the imposter syndrome that has plagued me my whole career, yes. I was really nervous that I didn’t have what it takes to hold the lead in a film. I had to tell a lot of voices in my head to shut up to get it done but the feeling of accomplishment to work through all of that was worth the challenge.

Before the pandemic hit, we were getting ready to finish filming City of Crows, a female-led thriller but everything is sort of on pause now. I’m producing a film with my husband and working on a few other exciting projects focused on the representation of Latinx talent in front of and behind the camera.