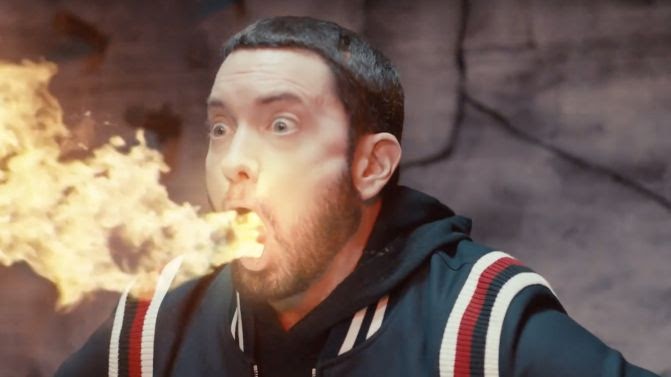 (The Hollywood Times) 3/16/20 – What’s my answer to skipping the gym for probably over a week since corona dropped and peaked it’s ugly head into our lives?  It’s Eminem! The Detroit media mogul has me bobbing up and down like I’m possessed with his new music video “GODZILLA” featuring Juice WRLD who just passed away December 8th 2019 from a seizure. 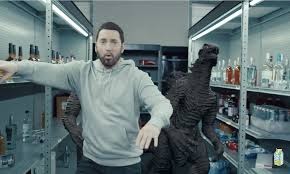 Eminem brings out his alter ego slim shady and burns the house down.  This is officially my favorite song by Eminem and the video is an absolute riot.  This thing dropped March 9th and EM declares on the song through his lyrics that “this beat is cray cray”!  Really it’s also the video which was directed by Cole Bennett and is the best thing I’ve seen visually from EM since “Darkness” and “Venom”.  It’s placement in the youtube channel Lyrical Lemonade means that this is definitely a way of packaging Shady right back into grabbing some new fans that are finally old enough to start listening to rap music!

For all these new lucky fans they get to see him switch his speed and rhyming styles frequently or so it would seem since I’m no rap expert.  This is simply just how it felt as a spectator. I just also found myself realizing that this points to how far he really is from retiring. If you watched the debate on television last night you can really see that at 47 years of age he can still bring things to a colossal level verbally.  Joe Biden and Bernie Sanders can ramble but can they rhyme? 40 years from now we may still see Eminem rhyming like a rap god. After all who can still pull 13 million views in the first 24 hours on youtube.