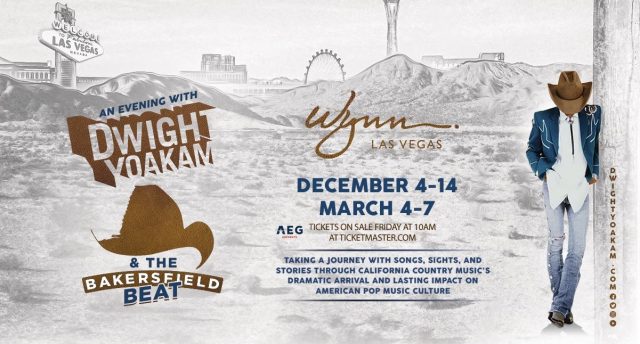 LAS VEGAS (Aug. 20, 2019) — This December, GRAMMY Award-winning entertainment icon Dwight Yoakam will make his Wynn Las Vegas debut with a six-night residency, An Evening with Dwight Yoakam & The Bakersfield Beat, at the Encore Theater. Guests can expect to take a journey with songs, sights, and stories through California country music’s dramatic arrival and lasting impact on American pop music culture Wednesday, Dec. 4 – Saturday, Dec. 14. Tickets for all performances will be available for purchase starting Friday, Aug. 23 at 10 a.m. PDT.

Beginning with the Dust Bowl era, Yoakam will take the audience on a musical excursion exploring the history of the sounds associated with Bakersfield, Calif. through songs and storytelling in this exclusive residency. Yoakam will perform a variety of the music that influenced and created the “Bakersfield” and “California Country-Rock” genres of country music from its early beginnings to its commercial zeniths, in addition to his own original music that was shaped and influenced by this legacy. This unique showcase will reflect the concepts that created his self-curated SiriusXM channel, Dwight Yoakam & The Bakersfield Beat.

Throughout his career, Yoakam has sold more than 25 million albums worldwide and is a 21-time nominated, multiple GRAMMY Award winner. Nearly 40 of Yoakam’s singles have charted on Billboard, with 14 peaking in the Top 10. Yoakam is a recipient of the Americana Music Association’s Artist of the Year Award, and this fall he will be inducted into the Nashville Songwriters Hall of Fame in the Songwriter/Artist category at the 49th Anniversary Gala on Oct. 14, 2019.

Yoakam will return to the Encore Theater stage in March 2020 for a three-night residency. Tickets for these performances will also be available for purchase starting Friday, Aug. 23 at 10 a.m. PDT.

Dwight Yoakam has sold more than 25 million albums worldwide, and he is a 21-time nominated, multiple GRAMMY Award winner. He has 12 gold albums and 9 platinum or multi-platinum albums, with five of those albums topping Billboard’s Country Albums chart and another 14 landing in the Top 10. Nearly 40 of Yoakam’s singles have charted on Billboard, with 14 peaking in the Top 10. Yoakam is a recipient of the Artist of the Year award from the Americana Music Association, the most prestigious award offered by the organization. Yoakam’s self-curated SiriusXM channel, titled Dwight Yoakam and The Bakersfield Beat ‘Where Country Went Mod’ launched in April of 2018. In 2016, Yoakam released his bluegrass album Swimmin’ Pools, Movie Stars… on Sugar Hill Records. In 2018, Yoakam released two songs, “Pretty Horses” and “Then Came Monday” (the latter written with Chris Stapleton). In addition to his musical career, Yoakam is a formidable film and television actor who has appeared in over 40 feature films, including Sling Blade and Panic Room. In 2016, he recurred in David E. Kelley’s Amazon series Goliath. Recently, he appeared in director Steven Soderbergh’s film Logan Lucky with Channing Tatum and Daniel Craig. Yoakam is capable of seamlessly melting into his roles and impressively standing toe-to-toe with some of the world’s top thespians over the course of his storied and successful acting career, including Jodie Foster, Tommy Lee Jones, Jared Leto, Forest Whitaker and Matthew McConaughey. For more information, visit www.dwightyoakam.com.