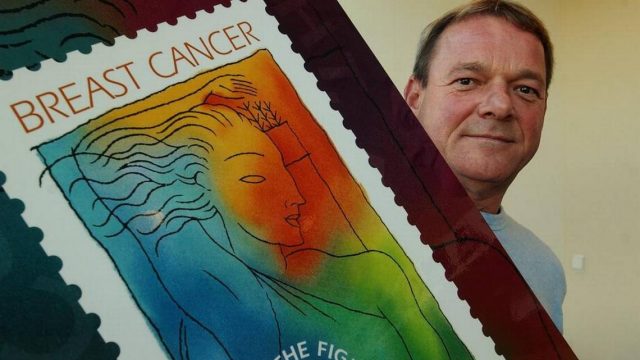 Hollywood, CA (The Hollywood Times) 10/02/2018 – Dr. Ernie Bodai, pioneer, surgeon, advocate, activist, and hero to thousands upon thousands of women – and men – as a pioneer of the Women’s Breast Cancer Stamp – he has also authored hundreds of medical articles, has five published books – “four of which focus on cancer.” He holds 13 medical-device patents, serves on medical advisory boards of numerous biomedical companies is a member of numerous prestigious surgical societies and has received many national awards — including the UCD School of Medicine Humanitarian Award in 1999. Bodai says, “In July 2010, I was nominated for the Congressional Gold Medal.” His list of achievements are never-ending and well-deserved.

I met Dr. Bodai – a few years after the 1997 Breast Cancer Stamp made history as the first fundraising stamp in the US Post Office. Dr. Ernie Bodai should be a household name for what he’s gifted this nation and others. He’s not mentioned on the USPS site for the 65 cent Breast Cancer Stamp but he is here and all over the internet. Bodai’s fight for his stamp was the first of its kind and came from a surgeon who grew frustrated- after treating thousands of women with breast cancer – by the slow pace of research. He took his frustration – and his one-man mission for women – to Washington DC, lobbying Congress to have the U.S. Postal Service issue the breast cancer research stamp and to this day says, “I was able to convince Congress and the U.S. Postal Service to issue the Breast Cancer Research Stamp – the first ever stamp in U.S. history that sells at more than face value (65 cents) with the surplus amount donated directly to breast cancer research. Every four years, it has to be re-authorized.” In December 2015 (the same year the billionth stamp was sold) – President Obama signed the extension to 2019.

Dr. Bodai is no stranger to hard times. His ability to overcome challenges began very early in life when he fled Hungary at age 6 with his parents and two brothers after the Soviet takeover during the Hungarian Revolution in 1957. They lived in a bomb shelter for almost a year in Budapest. The family arrived in the U.S. penniless and unable to speak English – fast forward with exceptional accreditations – Bodai, has served as a clinical professor of surgery at UCD Medical Center and as chief of general surgery for Kaiser Permanente in Sacramento.

Today, Bodai no longer performs surgeries but is focused on post-cancer recovery as founder of Kaiser’s Breast Cancer Survivorship Institute. With the lowered age for women to go for a mammogram that the American Cancer Society announced a few years ago as 45 – Bodai has this to say:

“It’s a little bit disconcerting that every few years new recommendations are coming out. The new recommendations (for starting at age 45) are related to “normal risk” women. But nobody really knows what a normal risk is. As far as I’m concerned, if you’re female, you’re at risk of getting breast cancer. The No. 1 risk factor is being female.

Each individual patient should have a very detailed discussion with their primary care or OB-GYN physician about when to start screening. … I’d have a discussion about risk factors. If they have extremely dense breasts, they might need mammograms earlier. Or if they’re anxious about breast cancer, they should think about doing a mammogram sooner. It’s really an individual decision. … My recommendation is a baseline mammogram at age 35, then annual mammograms starting at age 40. But if you have a sister diagnosed at age 37, for instance, you should have a baseline at 32 – five years before the age of diagnosis for a pre-menopausal, first-degree family member.”

An interesting fact, “About 75 percent of women who are diagnosed with breast cancer are vitamin D deficient. … If they’re within (the normal range), their chance of cancer recurrence goes down.” Says, Bodai.

I met Dr. Ernie Bodai – in Long Beach – at a Postal Service Convention where he passionately and with humor spoke about his life, his journey and how the stamp came about. People laughed and wept and the amount of stamps bought that day alone – were off the charts. That was over ten years ago.

Years later, in 2009, he flew into LA – his books sent ahead of time – to speak at an art show for a local young artist (whose own mother is a cancer survivor) who hoped to raise funds to continue his schooling and awareness on cancer that took place at Miceli’s Restaurant in Hollywood, CA.

With holidays upon us, the stamp is a simple reminder that you can put on all outgoing mail. A simple yet beautiful reminder that one can give – you can help save a life if just one person gets a needed mammogram by seeing Dr. Bodai’s stamp. With early detection – death rates have gone down and there are more survivors than ever.

Bodai is currently introducing the first ever “global stamp” raising awareness and funding to conquer the disease worldwide. To date over 70 countries have begun work on this important project. Austria, Australia, Belize, Croatia, El Salvador, France, Grenada, Hungary, Italy, Jordan, Kenya, Kosovo, Macedonia, Micronesia, Pakistan, Serbia, Slovakia and The Gambia have already issued the stamp. “Together we will find a cure in the near future” — that is his hope.

Since retiring from the surgical treatment of breast cancer, Bodai has become certified in Oncological Rehabilitation and currently he is writing and lecturing extensively on the long-term medical consequences of breast cancer treatment and advocating for lifestyle issues (coronary artery disease, diabetes, osteoporosis, etc.) related to breast cancer.

As the stamp says, fund the fight, find the cure!