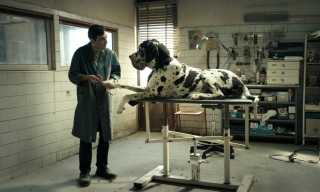 Hollywood, CA (The Hollywood Times) 04/11/2019 – Dogman, an Italian tale of revenge is another intensely brutal piece of cinema by director Matteo Garrone – who won the grand jury prize in Cannes in 2012 with his Neapolitan comedy Reality. Dogman is inspired by the real-life case of Er Canaro (The Dog Keeper) – a pet groomer and drug addict who, in 1988 – murdered one of his criminal acquaintances in his Rome salon. This is a tale of life among the criminals where the dogs witness the humans.

Set in an oppressive seaside village on the outskirts of a large city, Garrone drops you into the bleak and twisted world of Marcello, a complaisant dog groomer who commits petty crimes for Simone (Edoardo Pesce), an unrelenting beast who violently terrorizes the neighborhood that is set outside the town. Marcello is a meek, tail-between-his-legs character who sells coke on the side so he can take his young daughter (Alida Baldari Calabria) on trips when she visits. The tensions are taut throughout the film that has a canine view. The well cast dogs serve as audience pointers throughout the story, all the male characters are strong. Garrone’s actresses are wonderful – given they have little dialogue to round out such rich characters.

The business owners surrounding the Dogman shop are run by rough men who talk about having Simone eliminated after tiring of living under his destructive actions. Simone is the animal… or is he? The conversation leads the men from he must be dealt with (Sicilian style) to he’ll only serve a few months’ time to what’s the point? Eventually someone will kill the out-of-control brute. Marcello sits and listens, believing he is friends to both his dark little community as well as his raging bull friend.

Simone forces Marcello to give him the keys to his shop so that he can return and break into the business next door – promising to make them both rich. The next day, the police take Marcello in and ask him to sign a paper cutting him a deal of leniency if he confesses that Simone did the crime. Marcello decides to take the year in jail instead. He comes out a changed man, no longer the puppy doing its’ master’s bidding. Did he take the deal out of greed or because he feels Simone will kill him? His love for his daugher and all that he has lost is confusing but the film works well nonetheless.

As Marcello comes home the tides have changed. The local business owners will no longer have anything to do with him and Simone refuses to give Marcello what he was promised for the burglary, then beats him. The last time his pet will take it.

Then begins the grotesque domino effect of what can occur when the bullied becomes the bully.

Marcello Fonte won Best Actor at Cannes and has been compared to a cross between Peter Lorre and Buster Keaton. He’s a uniquely familiar character and a fine actor. The film is not for the queasy – a dog is pulled out of a freezer – yet humor surprisingly pops out amid the violent moments in this viscerally oblique world painted by Nicolaj Bruel’s cinematography and Capuani’s sets.

Unfortunately, the film was snubbed for Oscar foreign film consideration by the Academy – which won Marcello Fonte Best Actor at Cannes and is the 2nd loss for the shortlist for Garrone.

Matteo Garrone is a master of getting performances from actors and canines alike. His film will be remembered among the criminal classics in both characters and subject matter. A criminal saga that keeps his audience with anxious anticipation of the outcome.

*This reveiw ran originally on February 22nd. Dogman opens April 12th, look for a theatre near you!