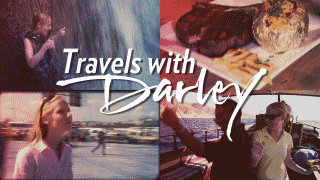 Step out of your comfort zone and take a break from your work week by traveling the world with “Travels with Darley,” which has begin broadcasting Monday through Friday for Southern California viewers at 6:30pm on PBS’ KCET since September 2.

From California to Dubai, award-winning TV host Darley Newman joins local experts and guides to reveal bucket list adventures and fascinating foods. “Travels with Darley” debuted on PBS stations in 2016. This new season marks the 41st half hour of the series, which goes back into production in September. On Southern California’s KCET, “Travels with Darley” will follow BBC World News, airing just prior to the region’s popular Huell Howser series.  Episodes start on September 2nd with a trip to the French Caribbean and end October 31st in New York’s Adirondacks.

Highlights of the series include making kouign-amann, Europe’s fattiest pastry, along France’s Cote d’Azur, Danish bakeries and local wine along California’s Central Coast in Solvang and top sushi haunts in Tokyo. Darley also attempts extreme adventures that everyday people can enjoy on their travels, taking on the world’s fastest zip line in Wales, highest artificial climbing wall in Reno, tallest commercial bungee in Macao, freestyle skiing with Olympian Jonny Moseley and swimming with sharks in Dubai… in the mall. The latest and seventh season of the series will kick off on KCET on Septemer 16, taking viewers to Dubai, Hong Kong, Macao, Santa Fe, Nevada, California and the Adirondacks.

“We truly uncovered exceptional culinary and cultural experiences available to today’s traveler, as well as those perfect for adrenaline junkies,” said Darley. “Viewers may be surprised to learn about the perfume factory we visited in the Cote d’Azur where you can craft your own scent or that there’s a NASCAR racetrack that let’s travelers drive the course. Having locals to take us through each destination and activity gives a more genuine sense of place.”

“Travels with Darley” helps viewers gain an authentic view of destinations and take away ideas for interesting experiences they can recreate on their adventures by having locals guide viewers through experiential adventures. As a host, Darley doesn’t just observe each experience, but dives in, trying things like sustainable oyster farming in Morro Bay, mountain biking in the Santa Fe National Forest, glass blowing at the Corning Museum of Glass in New York’s Finger Lakes and more. This means that the mishaps of travel are captured right alongside the excitement and fun.

No stranger to the public television travel scene, Darley started on PBS with the series “Equitrekking,” which won several Daytime Emmy® Awards, spanned a new genre of travel and took her around the world on horseback for more than a decade.

Learn more about where to watch at kcet.org and view episode video previews at travelswithdarley.com.

Darley Newman is a travel expert, media entrepreneur, and author who channeled her passion for travel and storytelling into a dream career. Through her production company, DCN Creative, she is the creator, producer and host of internationally broadcast travel shows, “Travels with Darley” and Emmy Award-winning, “Equitrekking.” She also popularized the niche genre of equestrian tourism and often appears as a travel expert on leading media, including USA Today, The Washington Post and Forbes.