West Hollywood, CA (The Hollywood Times) 9/6/17 – Nobility can be conferred from without or come from within.  Less often than we might like, someone can be noble both inside and out.  Such may have been the case with Diana, Princess of Wales (1961-1997), also known as “Her Royal Highness” and “The People’s Princess.”

Many of us still remember Diana’s fairytale wedding to Prince Charles at Saint Paul’s Cathedral on 29 July 1981.  The ravishing bride was only twenty at the time and came to the altar full of youthful hopes and dreams.

The wedding festivities were televised to a global audience of nearly a billion people in 75 countries while 600,000 spectators lined the streets.  Women all over the world wanted to be “Shy Di’s” bridesmaids and may have even used some of the same music in their own weddings.  The births of Princes William and Harry were cause for universal celebration.

Sad to say, this match seemingly made in heaven soon crashed and burned in a Hollywood-style firestorm of incompatibility and infidelity.  The royal couple divorced on 28 August 1996 and Prince Charles married longtime mistress Camilla Parker Bowles (“the Rottweiler”) on 9 April 2005.  Diana herself had well-publicized affairs with James Hewitt and many other men. 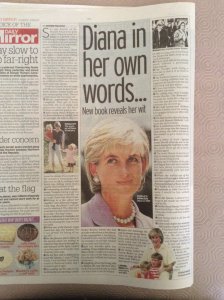 The world is still in shock over Diana’s untimely death at the age of 36 in a Paris car crash 20 years ago on 31 August 1997.  At this time she was arguably the most famous woman in the world.

At the time of her death, Diana was being hosted by her Egyptian film producer suitor Dodi Fayed at his billionaire father’s palatial home in the south of France.  Controversy still exists over Diana’s demise owing to ceaseless friction with the Royal Family, but most likely she and Fayed were only trying to elude the paparazzi one final time.  Diana’s close friend Mother Teresa died during the same tragic week, which only added flames to the fire.

Diana’s funeral on 6 September 1997 was accompanied by still another media circus.  Elton John re-wrote and performed “Candle in the Wind,” a tribute to the late Marilyn Monroe, for the occasion and dedicated the proceeds of the single to Diana’s pet charities.

Two of Diana’s top charity causes were AIDS/HIV and land mines.  She was the first British royal figure to contact AIDS patients, which endeared her forever to the LGBT community.  A few months after Diana’s death in 1997, the International Campaign to Ban Landmines with which she had worked won the Nobel Peace Prize.

Over the course of her short life, Diana worked for over 100 charities.  Stephen Lee, director of the UK Institute of Charity Fundraising Managers, said, “[Diana’s] overall effect on charity is probably more significant than any other person’s in the 20th century.”  (She was also named one of the most beautiful and best-dressed women ever many times over!)

Major memorials to Diana include the Flame of Liberty erected in 1989 on the Place de l’Alma in Paris above the site of the ill-fated car crash which killed her, Fayed, and their drunken French driver; a display and statue inside Harrods department store; and a statue commissioned in 2017 by Diana’s sons William and Harry for Kensington Palace to commemorate the 20th anniversary of her death.  “Our mother touched so many lives,” the young princes have rightly said.

With her famous figure, fluffy blonde hair, and fabulous fashion sense, Diana still has a celebrity aura rivaling that of any Hollywood actress.

She associated with many of the most well-known women of her time including Elizabeth Taylor, Cindy Crawford, and Madonna.  She mingled freely with women designers such as Donatella Versace and Catherine Walker and was followed everywhere she went by the insatiable press.

Diana is one of the most photographed women in history who has been written of repeatedly.  Thus it is a refreshing change to hear her speak for herself in a brief but revealing book of quotes called DIANA: I’M GOING TO BE ME by veteran reporter Phil Dampier, who has been writing about the royal family for 30 years.

Between 1986 and 1991 Dampier covered the royal beat for The Sun, Britain’s biggest-selling daily newspaper.  He frequently conversed with Princess Diana while reporting her weekly duties, as well as numerous holidays.

As a freelance journalist for the last 25 years, Dampier has traveled to more than 60 countries while following members of the House of Windsor.  His articles have been published in dozens of newspapers and magazines worldwide and he often appears on radio and TV to provide expert analysis and commentary.

DIANA: I’M GOING TO BE ME features Diana’s distinctive signature in red and a dashing photo in black and white on the cover.  The slim paperback volume consists of 85 pages beginning with Sources and Acknowledgements and a Foreword; continuing with three parts titled Before Charles: 1961-1981, Marriage: 1981-1992, and Separation and Beyond: 1992-1997; and concluding with a one-page Timeline of Diana’s life.  The three parts are prefaced with striking black and white photos of the subject, making this an attractive keepsake publication.

The following three quotes illustrate the content and character of each part:

Before Charles: Charles and Diana were engaged on 24 February 1981 and interviewed in the garden of Buckingham Palace.  Asked if they were in love, Diana said: ‘Of course,’ before Charles famously added: ‘Whatever love means’ (p. 19). 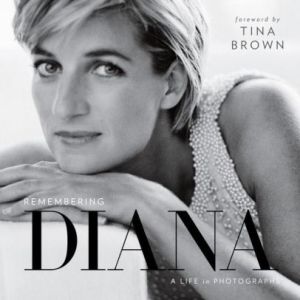 Marriage: On public engagements: ‘Imagine having to go to a wedding every day of your life-as the bride.  Well, that’s a bit what it’s like.’

Separation and Beyond: When asked what she would like as an epitaph on her grave: ‘A great hope crushed in its infancy’ (p. 83) 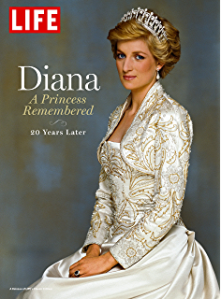 The final quote reads, ‘There has to be more to our existence than actually meets the eye’ (p. 84)

Pithy quotes such as, ‘They say it is better to be poor and happy than rich and miserable, but how about a compromise like moderately rich and just moody?’ (p. 54) betray an all-American sensibility that was in fact confirmed by Phil Dampier when he graciously answered some online questions in connection with this piece.  This interview appears below:

1)  One controversy surrounding Diana that is still of interest to us Americans is her alleged affair with the late John F. Kennedy, Jr.  This supposedly took place in 1995 in the same luxurious Carlyle Hotel room in New York where JFK Jr.’s father John once had trysts with Marilyn Monroe.

The brief Kennedy Administration, which concluded with John’s assassination in 1963, was called “Camelot” and the Kennedys were regarded almost as royals in the USA.  JFK Jr. met Diana during an interview for the political magazine GEORGE, which he founded in 1995.  He was well known for the good looks and charm inherited from both parents and dated glamorous celebrities like Daryl Hannah as one of PEOPLE Magazine’s Sexiest Men Alive.

Unlike many of Diana’s low-profile lovers, JFK Jr. actually seemed to be a good counterpart.  He was about her age, had lived a rather similar kind of life, and was still regarded as a “crown prince” by reporters who covered the plane crash that claimed his life in 1999.  Do you think the two could have had any kind of future together?

JFK Jr. came from the sort of background that could cope with her fame and they could have put that fame to good use.

Diana was looking for someone who was rich and powerful, able to be her equal.

She also told a friend, healer Simone Simmons, that she did have a fling with JFK Jr.

They hit it off personally and I’m sure he would have been an ideal companion and friend as well.  They would have been great using their power to promote the charities they were involved in.

Living in the USA would have made it easier to start a new life away from the royal family, but of course Diana didn’t want to be apart from her boys, so there was a problem.

After a tour of the White House, she said : “I would have loved it there.”  This is another quote in the book, showing she admired the US way.

2)  Like many celebrities, Diana is thought by some to have suffered from borderline personality disorder.  This may have been responsible for some of her more extreme behavior.  Do you think the genuine good she was able to do with her philanthropic work balances out her biography?

PD-Just before she died I thought Diana was going off the rails.  Her tragic death has perhaps masked some of her faults and failings.

She was all over the place, going from one lover to another, and her whole life seemed to speed up. 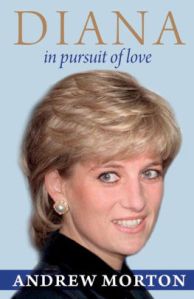 I think her basic insecurity stemmed from her childhood, when she was deeply scarred because her mother walked out on the family.

She was definitely unstable, but history will probably record that her good works outshone her personal problems – and her children are a wonderful legacy who say she was the best mother in the world.

3)  Along these lines, why do you think the wealthy and powerful Diana was able to connect so well with poor and suffering people all over the world?  Victims can be VERY difficult to work with and often reject well-intentioned overtures from more privileged would-be rescuers.  What were some of Diana’s secrets for those of us who might want to emulate her incredible example?

She identified with people’s suffering because she suffered as well, with her eating disorder, her insecurity, and her sense of betrayal from the ill-fated marriage.

She went on secret visits to see the homeless and seriously ill in hospitals and hospices, and learned about them and subjects away from the press.

She did it to find out more, not just for the publicity.

But sadly, it has to be said that sometimes that was a substitute for relationships in her own life which went awry.

At the time of her death she wasn’t speaking to her mother, her old fellow royal Fergie, or several friends.

She had a bad habit of falling out with people and instead of making it up, blaming them and cutting them out of her life.

But on the plus side she understood people who had problems because she had them herself.

It’s just a shame she didn’t live long enough to sort herself out and find the stability and right man she craved.

4)  Diana may have died, but her sons William and Harry are still very much alive!  Do you think her influence would transcend the grave if William should ascend the British throne one day?

The way they interact with people is down to her.  Diana was a great listener and William and Harry are good at hearing what people have to say.

Diana treated everyone, pauper or President, the same.  Her sons are taking up several of her causes, like landmines and homelessness, and carrying on her work.  William will be a king in touch with his people because of what Diana taught him.

A loss of a legend in the world of heavy metal, Marsha Zazula