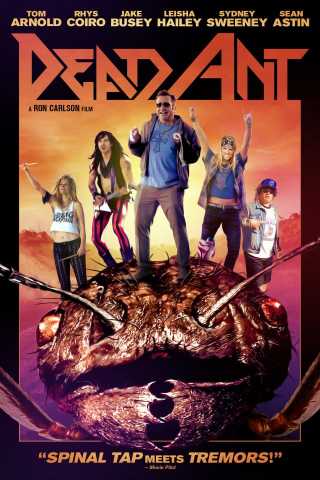 The “what’s the point of watching this movie?” flick that will have you questioning your own existence as a human being. Why would I want to watch Tom Arnold’s half-cock attitude manage a band into doing peyote to conglomerate on their lackadaisical, nostalgia-of-music collaboration?

Everything in this movie, from casting to setting, says we are giving only half of what we’ve got.  It won’t scare you, and it won’t startle you at all.  But it makes you wonder why you keep watching the movie.  You never see Roseanne, you never see Gary Busey, and you never see a ‘Billy Walsh’ moment.

Everything just seems like it’s left up to the fact of, ‘did you or did you not take some kind of substance to amp this movie up?’   If you did, then you are in for a treat, because I believe that is what they went for.  They literally want you to be on peyote or some kind of psychedelic rollercoaster synthetic drug.   It’s the chicken soup of a nonchalant indie horror comedy thriller that doesn’t really do much thrilling.  That’s up to the drugs you took that made you want to watch this type of movie in the first place.

Dead Ant is a not scary comedy, that has you running from the get go.  Running from the idea that you’ve fallen into the trap of thinking this is not going to be a waste of time.  It is a dead-set trap for anyone who has nothing to do with their life for days at a time, and can pause and rewatch parts and skip and go back and forth.   Mostly because there is nothing that makes sense of anything other than the actuality that is the casting, that makes this movie so great.

Arnold has you thinking of Roseanne at this time, and how one little thing can make you get removed from the conversation.  Meaning that the underbelly of this whole thing is that this is where washed up actors go to die.   This is where we are starting to see that anyone can make a movie great and do special effects and get a cast together and make a movie.

I’ve seen better things done in my homestate of New Jersey, on probably a smaller budget.  There is definitely an attempt to bring back a nostalgia of ENTOURAGE, which was at one point the best thing in Hollywood.  You couldn’t even add Dwayne “the Rock” Johnson to save this movie.

There’s nothing more I’d like than to see someone out-do Seth Rogen tripping his brains out after that Christmas movie with Joseph Gordon Leavitt. If you’re not on some kind of psychedelic hallucinogen, this won’t work for you.  We have Netflix, Amazon Prime, Hulu and all of these other networks.  This is truly where artists and actors go to die.  I guess you can say they’re making some kind of point with the movie, or pointing things out or they are just hanging out – either way, this may end in a dumpster of 99 cent DVD’s when the world ends.

I say that because you’ve decided to pull up a seat out of of your life to chase some kind of hype.  Joshua Tree Tripping on peyote gets adolescent heads rolling and even adults who grew up with entourage, a Sunday night tradition with Rhys Coiro Medellín as one of the actors, makes you want to take your anger out somewhere on somebody.  Jake Busey brings hair bands into the picture.  Tom Arnold pilots the whole project as a schmuck, (go figure) doing all of the setups that say he’s washed.  I say this as someone who doesn’t really enjoy horror flicks, but because of the drama and comedy brought into it, I could really enjoy myself and not feel pressured to jump out of my skin or look away from the screen.

Winning in the end is always the best gift for someone who doesn’t want to be grossed out, or feeling scared.  Sean Astin really goes down hard as another throwaway, which makes you wonder what the movie really is about.  It’s going to be something that people will rewatch for the commitment of the acting and script. It will make people wonder why Tom Arnold, Rudy, & the Entourages are running around a desert with bikini girls.

There will always be some story to try to figure out. Why did these people go there? Who knows?  For someone who doesn’t even like horror films, what am I even doing here?  I should probably meditate.  I can hardly believe this is the art of men of this caliber.  ​​