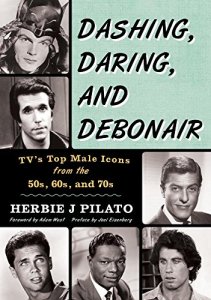 “Well, here we all are!  We got lucky, worked hard and did what we loved, and in return we found our places in the story – a story that Herbie J Pilato tells so well.”  –  Richard Thomas (actor, John-Boy from “The Waltons”)

“Is there anything Herbie J Pilato doesn’t know about pop culture, most specifically classic television? I love all his books and he’s got the creds to write them because he personally knows many of these icons and can ferret out all the juicy, little known, behind-the-scenes anecdotes that make these tomes such gems. Great reading!”  –  Kathryn Leigh Scott (publisher, author, actress; “Dark Shadows”)

“No one is more passionate or informed about classic television than Herbie J Pilato, who is at it again with this truly exhaustive survey of the most influential male stars and producers over three decades.  With profiles from the sublime (Rod Serling) to the ridiculous (Red Skelton), and a slew of other icons in between, Dashing, Daring, and Debonair is comprehensive, enlightening, and a blast to read.”  –  David Bushman (Curator of Television, Paley Center for Media)

“Herbie J Pilato gives a true voice to classic television in the same way historians give voice to classical music, poets, writers, filmmakers and creators of masterpieces in museums all over the world.  Herbie J places television history as defining America where it needs to be, side by side with the greatest artists of all time.”  –  Pierre Patrick (talent agent, author of “The Doris Day Companion”)

“Herbie J Pilato had me at Dashing, Daring and Debonair…a delicious, guilty pleasure written by one of today’s brightest chroniclers of yesterday.  Herbie J is a gifted and talented man, whose love, respect, passion, and vast knowledge of classic TV shines through on every page of this fun, fabulous can’t-put-it-down guide to TV’s finest male icons.  I adore this book – and I adore Herbie J!  Bravo to both!”  –  Caryn Richman (actress, “The New Gidget”)

“What an informative tribute to the male icons whose talents helped shape classic television!  The gang’s all here: everyone from Desi Arnaz and Rod Serling to James Garner and William Shatner, from Ricky Nelson and Donny Osmond to Johnny Carson and Andy Griffith – and literally dozens of others! Herbie J, take a bow!”  –  Thomas J. Watson (author, producer, TV historian, former personal assistant to Lucille Ball)

“Herbie J Pilato has given us an encyclopedia of television’s iconic male stars. What a grand and impressive trip down memory lane!”  –  Gloria Loring (singer/songwriter, actress, author)

“There is no one more knowledgeable or more passionate than Herbie J Pilato where classic TV is concerned.  Dashing, Daring, and Debonair not only demonstrates his vast expertise in this realm, but also gives the reader a fresh perspective on the many pop culture icons profiled in this book.  Great scholarship married to great fun!”  –  Bill Royce (Emmy Award-winning co-producer of “The Tonight Show with Jay Leno”)

“I’ve encountered the word ‘scholar’ more than once when associated with Mr. Pilato…first in print and recently spoken in front of me by Kung Fu‘s creator Ed Spielman.  In this and others writings by Herbie J, one gets the distinct sense they are not reading an historian’s words about television, but those by one who deeply cares for and understands the entire milieu and the real people who inhabit that very special world.”  –  Radames Pera (actor, director)

“I first went to the section about my Dad, and loved it.  Then I jumped to Gene Roddenberry because I’m a Trekker – and then on to Christopher Knight and Barry Williams because we’re friends on Facebook.  After that…I was just plain hooked.  I read it from cover to cover, enjoying every minute of this enlightening, entertaining, and revealing look at television’s glory days.”  –  Chris York (son of actor Dick York, “Bewitched”)

“What an exciting book!  A must-have for any fan of television.  Everyone from the baby boomer generation and all ages will remember these stars.  Now the renowned television historian and author Herbie J Pilato has a present for us all:  this amazing book.  From Fonzie to Barbarino to Batman, Mr. Pilato gives us in-depth glimpses at our favorite male stars of the golden age of television.  Kudos!”  –     Rick Lertzman, author, entertainment historian.

In addition to Dashing, Daring and Debonair, writer/producer Herbie J Pilato’s critically-acclaimed books include: Glamour Gidgets and the Girl Next Door, Twitch Upon A Star, The Bionic Book, among others.  In 2010, Pilato founded the nonprofit Classic TV Preservation Society (which helps to close the gap between pop-culture and education; www.classictvpreserve.org), presides over Television, Ink. (a family-oriented TV, film, and literary production company), serves as contributing editor to Larry Brody’s heralded www.tvwriter.com), writes frequently about classic television for www.emmys.org, and has worked on several classic TV broadcast and DVD documentaries for Bravo, E!, A&E, TLC, Warner Bros., Sony, and NBCUniversal. He lives in Los Angeles.