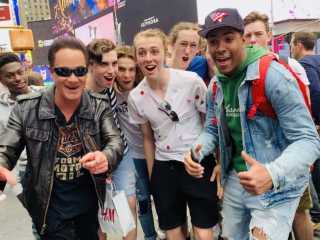 NYC; NY (The Hollywood Times) 5/18/19 – It was pandemonium and mayhem in Times Square on May 17th , as Jimmie Lee and his Posse invaded New York City with his no holds barred, zany, uncanny and politically incorrect comedy on the streets . Jimmies unique brand of street comedy with his huge persona made a big hit with the fans as Jimmie delivered  one liners, insults and zingers with some Jersey attitude and kept everybody on the edge of their seats!
Press and Media all covered the event and loved it and had a great time fully entertained by the antics of the Outlaw.

Chuck Darrow from Philly News says, ” Take Don Rickles to Henry Youngman’s house, dressed like Dice Clay, and you got The Jersey Outlaw”.  NY Post, Larry G  says, “Jimmie Lee delivers comedy that no one does anymore that is hilarious, 80’s style insults and wise guy style comedy , and the best thing is he just don’t care!”  Rory P from the Hudson Reporter, who’s followed Jimmie since the start, ” Jimmie Lee does Old School Vegas Comedy , kinda like Don Rickles And Rodney Dangerfield, but better, and with some Jersey Attitude, always entertaining and fun with the Outlaw”. Ripley  says it best, ” Believe it or not, Jimmie Lee is a funny guy”.

The Jersey Outlaw definitely took New York City by storm and everybody from all over the world was there for Jimmie, including  fans from Miami, Australia, Brazil, France, England and more. Comedy is universal, and Jimmie Lee has branded his comedy and TV Show world wide.
Make no mistake about it, the kids here to stay and the fans are loving it!

Jimmie says it best how it goes down when he hits the streets!
“Limousine Ridin’, Jet Flyin’, Girl Stealin, Wheelin Dealin, Lots of Fun, A Son of A Gun.  Shooting today in New York City, and the Jersey Outlaws looking real pretty “.
Dangerously Funny is currently in Season 3 and rated one of the best comedy reality TV shows.

Jimmie’s high octane over the top comedy has caught on and everyone’s loving when they see the Outlaw in action. Recently, Jimmie has filmed in Vegas and NYC. Upcoming shoots include Philly Comic Con in June, Atlantic City in July, Hollywood in August and more.
Watch for Jimmie on Late Night TV and follow him on YouTube, Facebook, and Instagram.