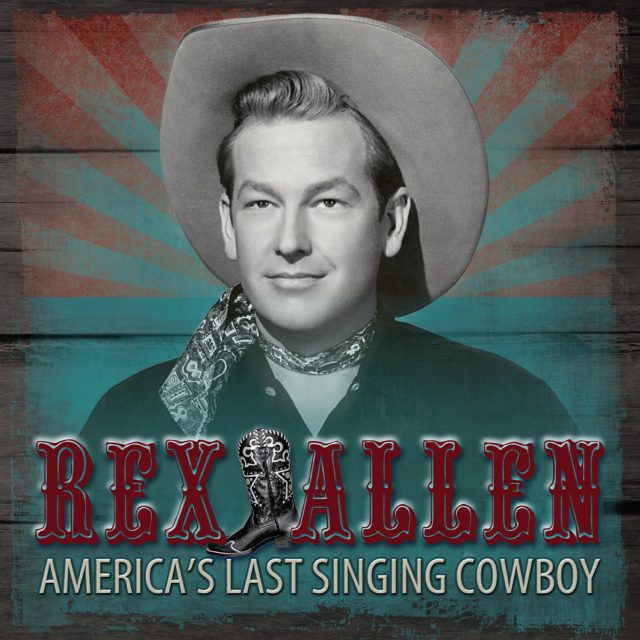 NASHVILLE, Tenn. (October 14, 2019) — Rex Allen – America’s Last Singing Cowboy is the latest release by Country Rewind Records and the first in a new series, referred to as the Western Heritage Series which will also feature The Son’s of the Pioneers and Tex Ritter. Rex Allen was a multimedia star before the term ‘multimedia’ was coined. He found fame as a singer, a song- writer, a Western movie star, a television actor and (in later life) as a narrator of Disney movies and TV shows. Rex Allen – America’s Last Singing Cowboy is being distributed by Select-O-Hits and will be available to order on Country Rewind Records website countryrewindrecords.com.

The new music is also available for streaming and download on all digital music platforms including Apple Music, iTunes, Spotify, Amazon Music, Google Play, Pandora and more on October 25th.

Some of the tracks on this album were even a revelation to Rex Allen, Jr. “I had never heard “Blue Dream” before,” he said. “Not only had I never heard that track before, but I had never heard him sing it. I worked with dad on around 200 performances in my early life. The same goes for “The Blue Light Waltz.” I’d never heard that song before, either! They are just gorgeous pieces of Western material with the Sons of the Pioneers singing background vocals. It is absolutely magical. The world needs to hear these songs.”

“After looking over the Masters that Thomas had in his files, I realized the Country and Western Music History he has in his library. Thomas and I agreed that we needed to create a new category for Country Rewind Records. I suggested The Western Heritage Series to Thomas and he jumped all over it,” says Rex Allen jr. “There are now six CD’s in production. Rex Allen Sr., Rex Allen Jr., The Sons Of The Pioneers, Tex Ritter, Roy Rogers, Tex Williams and Merle Travis. All this music represents the influence of the West Coast on Country Music from the 40’s through even today. Thank you Thomas Gramuglia and Country Rewind Records for letting this history come to light.”

Country Rewind Records, Thomas Gramuglia, rescued the master tapes which have been in storage for nearly 50 years. Rex Allen – America’s Last Singing Cowboy was Produced by Artist/Producer Rex Allen Jr. for Boxer Productions at Mountain Side Audio Labs Recording Studio engineered by Bil VornDick with assistant Sam Ventura. Mastered by Ron Tyler-Whitting at Oasis-HD Productions, LLC and engineered by Bil Vorndick with assistance by Sam Ventura. Background vocals were added by Jim Farrell, Rex Allen Jr., “The Riders In The Sky” (Ranger Doug, Too Slim, Woody Paul.) Musicians included Rex Allen Jr. on acoustic guitar, Bil Vorndick on percussion:, Jim Farrell keyboards and synthesizer. Graphic Design by Jim Farrell and Jeff Taylor at Nashville CD Design. Everyone involved with the music has been honored and thrilled to be part of these historical projects. These long-forgotten recordings are now saved for prosperity.

Rex Allen – America’s Last Singing Cowboy consists of tracks that have not been heard for decades and never commercially released. They were originally made at Radio Recorders’ California studios with the Cliffie Stone Band and the legendary Sons of the Pioneers. The masters date from 1950 to 1965. The recordings on this album were long thought to have been forgotten and lost forever.

Tom Gramuglia, President of Country Rewind Records, brought the masters to Allen’s son, Rex Allen, Jr., who produced the ‘cleaned up’ recordings that you hear on this album. Working at Mountainside Audio in Nashville, Rex Jr added some instrumentation and background vocals by Riders In The Sky. “They sound so much like The Sons of the Pioneers,” he said.

These recordings are a follow up to Country Rewind Records previous releases of such greats as Conway Twitty, Waylon Jennings, Connie Smith, Jeannie C. Riley and more which have all received great reviews by music critics worldwide.

Country Rewind Records has dedicated itself to bring classic country with this contemporary feel to not only the past country fans but also to the new country listeners.

About Country Rewind Records:
Country Rewind Records (CRR) was founded by Thomas Gramuglia of Hindsight Records in 2014, Gramuglia obtained a treasure chest of unreleased recordings from recruitment radio shows from the ‘60s and ‘70s. The superb CRR collection of original master recordings contains music from more than 100 country music legends and trendsetters (including intimate performances by country music greats such as Loretta Lynn, George Jones, Connie Smith, Faron Young, Dolly Parton, Conway Twitty and many more). These recordings were never released for commercial use. After a diligent quest to collect appropriate and legal permissions from artists and/or their estates, CRR has now recorded and produced multiple, quintessential, “must-hear” projects. With the mission to transfer these never-heard-before tracks to a high quality, state-of-the-art recording; complemented by contemporary instrumentation and background vocals, Country Rewind Records will release this historical American music to America’s music generations of the future. For more information visit countryrewindrecords.com

About Select-O-Hits:
Select-O-Hits  is owned by Sam W. Phillips and John Phillips, was co-founded in 1960 by their father, Tom Phillips, and uncle, Sam Phillips, the legendary founder of Sun Records. Tom Phillips began his career in music as Jerry Lee Lewis road manager for a number of years. He had invested all of his savings into an upcoming 1958 European tour when news of Lewis marriage to his 13 year-old cousin hit the front pages. Lewis career came to a sudden, although temporary, halt. The tour was cancelled, and Tom was broke. Sam helped him by giving him a job in the Sun Records warehouse and allowing Tom to live with him while his family stayed behind in Mobile, Alabama. Eventually, Tom saved enough money to send for his family in 1960. Tom was not satisfied with running the warehouse, so with the help of his wife, Lucille, he opened a small record store and one-stop that provided small, predominantly black-owned record stores with everything from phonograph needles to display racks. In the mid-1970s, Select-O-Hits began to concentrate more on distributing and less on retail and one-stops. The retail store closed in the mid-1980s, and the one-stop followed a few years later. Select-O-Hits has formed a number of successful record labels, such as Avenue, Icehouse, SOH, Brutal Records, Basix Music, Blues Works and Prophet Entertainment. In 1997 half of the company was sold to Malaco Records of Jackson, Mississippi. While all genres of music are represented in the family of labels Select-O-Hits distributes, Rap, Blues, Soul and Gospel are still the largest portion of the business. Today with sales offices and staff in Memphis, Atlanta, Nashville, Philadelphia, New York, Los Angeles, Sacramento, Miami, Chicago, Houston and Seattle, Select-O-Hits is one of the largest independent record distributors in the country, providing services for over 300 independent vendors to all key US music traditional “brick and mortar” retailers and digital media sites. For more information visit selectohits.com