Los Angeles, California (The Hollywood Times) 11/3/2017 “Antonio and team from Life & Thyme came to me and I saw them as people with vision and good hearts and that is how we started working together for our episode on The Migrant Kitchen.”  Chef Carlos Salgado from Taco Maria’s in Orange Country told The Hollywood Times Thursday night at KCET’s Outdoor Premiere Screening Event for THE MIGRANT KITCHEN and MEALS READY TO EAT at LA Plaza De Cultura y Artes in Downtown Los Angeles.

10 Chefs are featured in THE MIGRANT KITCHEN Season Two provided tastings of some of L.A.’s globally inspired cuisine – including Cricket Tacos!

KCET kicked off the fall launch of two food series THE MIGRANT KITCHEN (in partnership with acclaimed culinary publication Life & Thyme) and MEALS READY TO EAT (produced in partnership with military-veteran media brand We Are The Mighty) with a private outdoor screening event/chefs tastings at LA Plaza de Cultura y Artes in downtown Los Angeles.

Over 250 guests attended the special screening event including the cast and crew from both series premiering on KCET on Weds., Nov. 8 starting at 8 p.m.

The Hollywood Times had the opportunity to interview three of the chefs that cooked for the guest at the premiere screening. 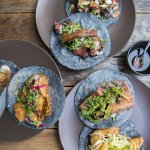 THT: When did you decide you wanted to open a restaurant?

Carlos Salgado:  “When I was growing up, I had no concept of my future in owning a restaurant.  As am immigrant kid, I didn’t look to kindly to the work my parents did. I thought it was very simple and too humble, not exciting, even embarrassing. I can say that now because I feel so much differently.  Now I know they are smart and artful people, that working in restaurants gives us the opportunity to work closer to the fundamental forces in our lives that matter most.  In reality they were the noblest people I knew and the richest.”

THT: Where do you see yourself in five years?

CS:  “Well my son will be five and a half, so hopefully I will be a stay at home dad.  But if have to continue to be a chef, then I hope to continue to focus on the work that we do at the restaurant and maybe open something else.  I also do the food program at the Ace Hotel in Palm Springs.  The menus there are ours. It is a different part of my personality and it’s fun.  I get to try other things.  Beyond that, I should probably care about making money, more than anything I care about these kids (referring to his staff), who are my family.  My parents taught me that the staff don’t work for us they work with us and we are all trying to help each other.” 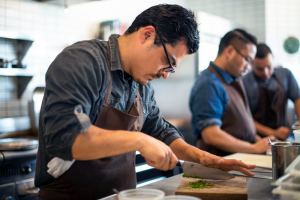 THT: What is your specialty at your restaurant?

Carlos Salgado’s Taco Maria restaurant made LA Times Restaurant Critic Jonathan Gold’s 101 Best Restaurants Guide that was in this Sunday’s LA Times (subscribers only) as No. 5 on his list!  Way to go Carlos. Congratulations.

There were a couple other restaurants featured on Season Two of Migrant Kitchen on the list.

In early 2017, Salgado joined forces with Ace Hotel to bring all new menus to King’s Highway, the desert roadside diner at the Ace Hotel and Swim Club in Palm Springs, California

Next interview was with Tsubaki’s Charles Namba:

THT: When did you open your restaurant Tsubaki?

CN: “Eight months ago in Echo Park on Alison Avenue.  It is tradition home style Japanese izakaya food that I grew up on.”

THT: What was the first thing you learned to cook?

THT:  Are you looking to open more restaurants?

CN:  “We are expanding and opening another restaurant right next door to our current one.  I have six chefs currently.” 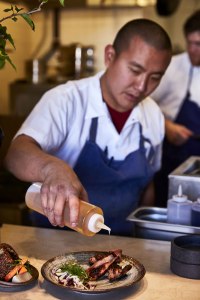 THT:  What draws customers to your restaurant?

CN:  “I think just because it is different and no one if doing quite what I am doing, we do the most classic dishes and I don’t want to change that.”

THT: What dish did you prepare for tonight’s event?

DT: “It was a black pepper pork confit with quail egg and it is just an old-time homey dish. We were asked to showcase a dish that kind of represents us, so this is the dish.”

THT: Is it something your Mother and Grandmother made when you were a child?

DT: “It is was every Vietnamese grandmother made at some point. This is a dish you should know before going out on your own.”

THT: Where did the name of your restaurant “Good Girl” come from?

DT: “I just wanted a name that was just fun and didn’t take itself to seriously and I like that it’s symetrical, it has four letters.  I like the name.”

THT: What is your specialty?

DT:  “I would say that it is a true neighborhood spot.  It’s a good reflection of the neighborhood that you could come weekly and a no fuss, but just enough effort.  We get people on their first dates, they celebrate theirs birthday here and kids love coming to Good Girl Dinette for their birthdays.” 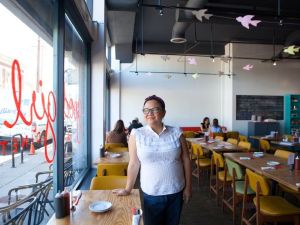 The Good Girl Dinette is in Highland park and has been opened since 2009.

Beverages were generously provided by ONEHOPE Wine, Don Francisco’s Coffee, Hint Water and World Sake Imports, whose Kerry Tamura is also featured in the upcoming season of the series that explores Los Angeles’ booming food scene through the eyes of a new generation of chefs whose cuisine is inspired by the immigrant experience.

Surrounded by heat lamps in the Olvera Street locale, guests then settled into their cozy KCET-branded blankets, (which we all got to keep and take home with us-Thank you KCET) to watch the outdoor premiere of the new season of THE MIGRANT KITCHEN and the debut of the new series MEALS READY TO EAT.

Raffle items at the event included a $50 Doan’s Bakery gift certificate, a $75 gift basket from Belcampo, a cooking class valued at $125 from BLVD Kitchen, three bottles donated by 10th Mountain Whiskey valued at $150 and finally, a $250 gift certificate for two at The Bazaar by Jose Andres at SLS Beverly Hills.

The premiere episodes of both series were screened. Descriptions of each episode are as follows:

[ https://www.kcet.org/shows/the-migrant-kitchen ]THE MIGRANT KITCHEN episode one, “Alta California” shows a collection of culturally connected, distinguished chefs (including Ray Garcia of Broken Spanish, Wes Avila of Guerilla Tacos, Carlos Salgado of Taco Maria, as well as Jorge Gaviria of corn purveyor, Masienda) working to preserve heritage and push forward the “Alta California” Mexican food movement. By celebrating those dishes and ingredients integral to Mexico’s cuisine and its economy, a group of accomplished Mexican-American chefs are working to elevate not only the food, but what people of their heritage can achieve in the food business. Featured in the episode: Guerilla Tacos, Orange County’s Taco Maria, Broken Spanish, BS Taqueria.

[ https://www.kcet.org/shows/meals-ready-to-eat ]- MEALS READY TO EAT episode one, “Natick and Fort Lee” uncovers the scientists and chefs working to ensure the health and well-being of our nation’s finest, even as they are challenged by the toughest terrains and harshest conditions in the world. 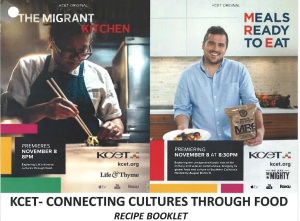 All guest were given a recipe book like the one pictured as they left the fantastic and delicious food experience screening event.

Both shows will also be streaming on YouTube, Roku, Amazon and Apple TV.

Don’t forget to tune into the Migrant Kitchen, Season Two this week:

and Meals Ready to Eat, Season One:

They are two really great shows that will inspire you to come out to the restaurants featured on Migrant Kitchen and even want to make a few of the recipes shown on Meals Ready to Eat.

The Hollywood Times photograph, who also attended this event, took upon himself to look up Merriam-Webster definition of Food.  I bet not that many folks have looked it up. Here is it.

1 a: material consisting essentially of protein, carbohydrate, and fat used in the body of an organism to sustain growth, repair, and vital processes and to furnish energy; also: such food together with supplementary substances (such as minerals, vitamins, and condiments)
2: nutriment in solid form
3: something that nourishes, sustains, or supplies

KCETLink Media Group is a national independent, nonprofit, digital and broadcast network that provides high-quality, culturally diverse programming designed to engage the public in innovative, entertaining and transformative ways. With a commitment to >independent perspectives, smart global entertainment, local communities, and opportunities for engagement and social action, KCETLink depicts people and the world through a lens unavailable elsewhere in U.S. media. A viewer-supported 501(c)(3) organization, KCETLink content is distributed nationally via satellite on Link TV – DIRECTV channel 375 and DISH Network channel 9410 – and on KCET in Southern and Central California via broadcast and cable, as well as through various digital delivery systems. For additional information about KCET and Link TV productions, web-exclusive content, programming schedules and community events, please visit kcet.org or linktv.org. Select programming from KCET and Link TV is also available for streaming on Hulu, Apple TV and Roku platforms.