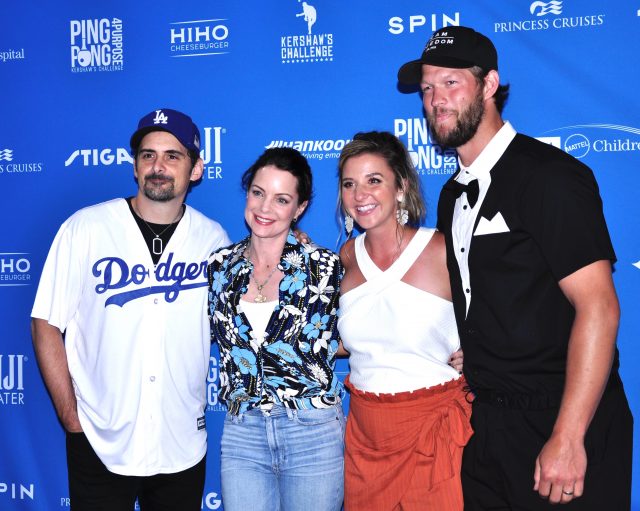 Los Angeles, CA, (The Hollywood Times) 8/9/2019–“ Clearly the work of Kershaw’s Challenge could not be done without every single one of y’all here. We want y’all to know that because of the sponsors, every single dollar raised tonight gets to go to these children and y’all, Clayton and I have been to Zambia multiple times, the Dominican republic multiple times.. We’ve met these kids. We know these organizations by heart. We have gotten to see these projects start with dirt and go from the ground up,” stated Ellen Kershaw. “And I have to tell y’all, lives are being changed. This is working and these kids who are in critical situations, at risk, there is life changing impact happening and that’s because of y’all. We are so thankful that you all trust us and you believe in the mission of Kershaw’s Challenge and what we’re trying to do because we believe that there is bigger things happening and each of us can make a difference.”

Clayton Kershaw and his wife Ellen called on friends from the entertainment world as well as sports stars to join them for a night of fun. Guests were invited to play ping pong, listen to good music, eat good food and of course to give to support the Kershaw’s charity, Kershaw’s Challenge.

Clayton Kershaw, ace pitcher for the Los Angeles Dodgers, can throw a strike-out pitch with enough force to cause a batter to swing, miss and wonder, “What just happened?”
Now you may think, “That’s all well and good but what does his pitching have to do with ping-pong?”

Well, as great of a pitcher as he is, he is just as much of a force and fierce competitor at table tennis.

You have to have a well conditioned arm to pitch a strike-out baseball game and ping pong is no different. If you have a poor serving arm and or an inadequate return, you are just swinging at the air hoping to hit the ball and more than likely missing it a great deal of the time. Kershaw comes to play and he plays to win.

The 7th annual ”Ping Pong 4 Purpose” charity tournament was held at Dodger Stadium, August 8th, in Los Angeles, CA and did not disappoint. Many guests arrived and walked the Blue Carpet ready to pick up a paddle and do as much damage to their opponent(s) as possible.

Robert Horry, of the Los Angeles Lakers, won seven championships during his 16 year career in the NBA was one of the night’s ping-pong participants and stopped to chat with THT. We asked him about his ping-pong game and tested his ping-pong Olympic knowledge.

THT: Do you play ping-pong?
Horry: I play a little bit.
THT: Would you consider yourself a novice or a ping pong aficionado?
Horry: Well, if you watch the guys in the Olympics, I’m not as good as them. I’m an amateur novice compared to them.
THT: You mentioned the Olympics. In 2020 the Olympic Games will be held in Tokyo, Japan. A trivia question for you. In what year was ping-pong added as an Olympic sport?
Horry: 1992.
THT: Correct answer,1988.
Horry: (Laughs and says jokingly) oh, see, I was four years old (laughs again).

We posed the same questions to actor and former NFL player Isaiah Mustafa.

THT: Are you a novice or an aficionado ping-pong player?
Mustafa: I’m right in between. I’m a moderate ping-pong player. I don’t swing left, I don’t swing right. I’m just right in the middle.
THT: Okay, well In 2020, the Summer Olympics will be held in Tokyo, Japan. What year was ping-pong added as an Olympic sport?
Mustafa: (answers briefly) ’76.
THT: No. In 1988.
Mustafa: (Smiles and nods his head)

Other guests were excited to just be apart of the evening to support the Kershaw’s charity, Kershaw’s Challenge to help beneficiaries empower children and communities in Los Angeles, the Dominican Republic, and Africa. Guests were also pumped to watch friends or family members win or get annihilated during the Ping Pong 4 Purpose tournament. 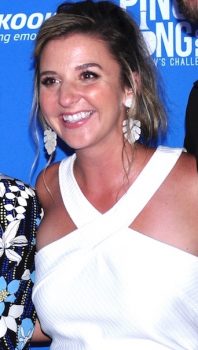 “This year we’re getting to partner with three organizations here in Los Angeles who are the hands and feet of change happening in this city. And that’s the L A Dream Center that’s right down the road from the Stadium, it’s Just Keep Livin Foundation, the organization started by Matthew McConahay and the Dodgers Foundation and building our Dodgers’ dream fields in Compton. We are so thrilled to partner with y’all. Thank you for being the hands and feet on the front line of change here in Los Angeles.” Ellen Kershaw

Once inside Dodger Stadium, Clayton and Ellen Kershaw kicked off the evening by welcoming guests and giving a very appreciative thank you to their sponsors for the evening. Before the ping-pong tournament began, the Kershaw’s presented the Paisleys with their organization’s Kershaw’s Challenge Impact Award.

Brad and Kimberly were very touched to receive such an honor and recognition from the Kershaws for their history of philanthropic advocacy and non-profit organization, The Store. The Store is a free grocery store, to serve children and families in need in their Nashville community and address issues of hunger and food security.

On being honored by Clayton and Ellen Kershaw, Brad stated, “It’s amazing. I’ve never met a human being with more heart. He (Clayton) and his wife Ellen are our inspiration for how you can be the best couple you can be and how you can make the world a better place. I find so much inspiration in them and I’m thrilled to be here with them tonight.”

Emcee for the evening, Bryan Cranston (best known for his role in Breaking Bad and Malcom in the Middle) mentioned that within the last eight years, prior to the night’s event, Kershaw’s Challenge has given out $7.5 million dollars to the organizations they support.

As far as who won the Ping-Pong 4 Purpose tournament, the one and only team of Kershaw and Bellinger, of course, with a winning score of 21/7 over last year’s winners.

Kershaw’s Challenge was founded by Clayton and Ellen Kershaw in 2011 and works with organizations to impact lives in Los Angeles, Dallas, Zambia, and the Dominican Republic. For more information about Kershaw’s Challenge, visit www.kershawschallenge.com.