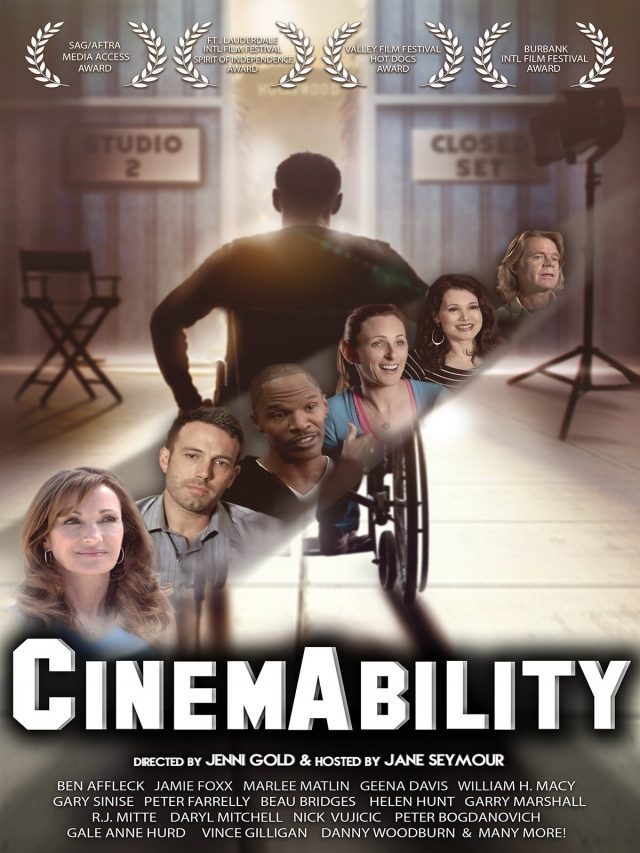 Los Angeles, CA (The Hollywood Times) 10/04/2018 – The stage is set with anticipation as Cinemability: The Art of Inclusion opens with robust star power recounting their admiration of well known disabled characters in film.  This is meant to serve as an introductory look at individuals with physical or intellectual disabilities through the Hollywood portal from the perspective of inclusion.  Director-writer Jenni Gold brings together a historical portfolio of work that demonstrates the extremely slow simmer of change in the industry both in front of and behind the camera.  The images and messages from the past were rarely flattering or heroic, however, the commentary  lends a positive look at Hollywood’s ongoing efforts to cultivate a more open-minded environment and gives a nod to growing sensitivity.

Understandably, the aim is to show progression and evolution within the industry, however, the result magnified that it’s only a mere fraction of what it should be.  Through interviews of participants including producers, directors, casting agents, and actors such as Jamie Foxx, Ben Affleck, Gina Davis, Jane Seymour, Marlee Matlin, and many more  notable industry professionals, the audience learns about many performances and successful movies which have featured main characters with disabilities and the successes and challenges of casting.

The discussion about disabilities in film is a tough subject to tackle because the demonstration of how a disability is portrayed can vary from physical to intellectual.  In general, there are some recognizable visual cues that signal a disability such as missing or malformed limbs, wheelchairs, canes, using sign language, etc.; and then other cues such as dialogue and behavior used to indicate obsessive disorders, mental health disorders, autism, etc.  Gold’s broad vision works hard to include a plethora of the challenges that people live with.  The mention of racial and gender issues which did not necessarily fit within the framework of this project are important concerns that do present some overlap for further examination.

The gems of the film are in the last 25 minutes.  They feature a powerful collection of spotlight comments.  Individuals share authentic feelings and provoking thoughts about their personal attitudes, experiences, and philosophies regarding inclusion and the entertainment industry, its influence in society, the makeup of industry professionals both in front of and behind the camera, and the momentum to do more.

Cinemability: The Art of Inclusion is provocative, elevates the conversation about inclusion in Hollywood, and challenges Hollywood to do better and think out of the box.