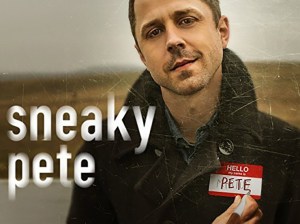 By Valerie Milano
Los Angeles, CA (The Hollywood Times) 1/13/16 – On Wednesday, January 4th, 2017 cast members, creators, and their guests celebrated at a launch event for Amazon’s original dramatic series “Sneaky Pete.”  The party was held at Clifton’s located at 648 South Broadway in Downtown LA with entertainment including poker and blackjack.  Both cast and creators had plenty to say about “Sneaky Pete” and the show’s catchy situations laced with lies and secrets that create heart-pounding entrapments for all concerned.
Fun competition at the head table included Giovanni Ribisi, Margo Martindale, Marin Ireland, and Executive Producers Bryan Cranston and Graham Yost.  Cranston gladly chimed in during an interview.

Cranston thought that CBS had passed on “Sneaky Pete” because the network had its own set of ideas about what they wanted to do.  “It was just a no,” Cranston said.  While this may have been a difficult no, it allowed Cranston’s team to open up the show on Amazon and create programming without certain boundaries that could go places they couldn’t have gone on CBS.

According to Cranston, Amazon has been a “phenomenal partner” with regard to the show’s content.  They would give input on what was and wasn’t working for them, but never imposed their own ideology about what was the fix as a broadcast network might have.
Instead, Amazon would leave these decisions up to “Sneaky Pete’s” creative team to enhance the show.  “They were open and great to work with,” concluded Cranston.
Cranston thinks that there was never a stigma attached to alternative platforms like Amazon for top tier actors.  While a few years ago there may have been a divide between working in television and feature films, “good storytelling is good storytelling” wherever it might take place.  “I have always said that the story should dictate the medium,” insisted Cranston.
Cranston has played villains before and does not worry about “Sneaky Pete’s” audience connecting with the villainous lead character.  Enough glimpses are given of Pete through a series of flashbacks that the audience can understand and root for him even if they don’t exactly sympathize with him.
When asked what movie role character was close to who he was, Cranston identified the “very stable and very normal” family man with a daughter and loving wife he plays in “Why Him.”  This comedy appealed to Cranston coming off many years of drama.  “The story has to move me first to capture my interest,” he said.
Giovanni Ribisi, the super talented lead player in “Sneaky Pete,” was also on hand to share his insights.  He agrees with Pete that when a liar is caught in a lie, he just makes the lie bigger.
While Ribisi empathizes with Pete, he is not sure that redemption lies anywhere in his future, saying, “He’s behaving the only way he knows how to. . . .You can’t necessarily look at him as a villain, but as someone who is trying to survive a situation.”
“I love the insanity of the character and seeing how far he will go,” was how Ribisi summarized his view of Sneaky Pete.
Giovanni Ribisi was full of praise for co-star Bryan Cranston, who inspires him to be better through daily observation.  “I think he’s one of the great American actors and a consummate professional,” claimed Ribisi.
Margo Martindale, who plays Pete’s colorful mother, also talked about the work.  She appreciates the career benefits that maturity and life experience can bring to acting.  “You don’t have to make it up!” she exclaimed.
Martindale has done 300 plays for the stage and used these projects to accelerate her career in other directions from movies to television.  But she loves the theater since there is nothing like it.  “When the right thing comes along, l’ll be back!” she said.
Margo Martindale once learned karate for a commercial and is open to just about anything in “Sneaky Pete.”  She considers Bryan Cranston to be a great hands on director:  “He has a clear vision of what he wants.”
In closing, Cranston offered a quick last thought:  “What I’m grateful for is that actors can now say ‘I’m an actor’ and not be limited by saying ‘I’m a television actor’ or ‘I’m a soap actor’ or ‘I’m a comedic actor.’  It’s great to say, ‘I’m an actor, and I’m looking for an opportunity to tell stories.'”
Stay tuned for some truly over the top stories in “Sneaky Pete!”