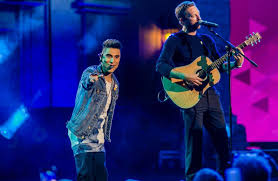 Bel Air, CA  (The Hollywood Times) 10/219 – There are charity concerts and there are charity concerts, but it took the Virtuoso Foundation Ball to put Coldplay’s Chris Martin and Snoop Dogg on the same stage. Their connection? Both are supporters of pop vocalist Emmanuel Kelly — a war orphan deformed by poison gas, abandoned in a shoebox in Baghdad, raised by a nun in Australia… and at 17 a viral singing sensation on Australia’s X Factor. Thanks to the new make-a-charity website www.GVNG.com (more on them later), Kelly started Virtuoso to “provide educational and artistic grants and mentorship to minority groups within our society, including differently abled individuals, LGBTQIA, and other marginalized groups [and] be a bridge for able bodied and differently-abled individuals to come together to create art.” On Saturday, he enlisted Martin and Snoop to do just that.

The afternoon event, held in a private Bel Air endless-view estate, was co-hosted by The International Music & Wellness Council sponsored by everyone from Nest Seekers Realty to 101 Vodka. Mostly, though, it was a showcase for the “Go Fund Me with 501c3 status,” GVNG. Ever wanted to start your own charity? We all have a cause, but who can face that paperwork? That’s what GVNG founder Dominic Kalms set out to tackle with some tech-savvy programmers and IRS-savvy lawyers. Now he runs a web platform capable of turning anyone’s dream into a tax-deductible site with a few clicks. So far, Kalms has set up charities for Richard Branson, Miley Cyrus, Val Kilmer, plus a bunch of just plain folks.

“It took me maybe 5 to 8 minutes to set the whole thing up,” says actor Zack Sztanyo, who was moved by Hurricane Dorian to start a Bahamas relief fund called No More Lost Souls. He was able to immediately receive tax-deductible contributions, with GVNG monitoring distribution to keep it kosher. (They take a 5% fee for their services.)

Admitted, the 200-or-so people who flocked to the outdoor event were more excited about getting up close and personal with Chris and Snoop than they were about donating to Virtuoso. And they got a fun afternoon for their not-inconsiderable donations: ticket prices ranged from $500-$1000. As one Coldplay fan put it, “How often am I going to get a chance to stand 5 feet away from Chris Martin playing an acoustic guitar?”

Martin opened the day with a pleasant set of Coldplay favorites: “Viva La Vida,” “A Sky Full of Stars,” “Something Just Like This.” Then Emmanuel Kelly came out and they sang a duet with him of John Lennon’s “Imagine.” Kelly was, of course, wildly outclassed vocally by Martin – have we underappreciated Martin’s chops all this time? – but you have to give the kid major points for degree of difficulty. Kelly also did a few of his own tunes, ‘80s-style pop reminiscent of Top 40-era Peter Gabriel.

There was a fairly long wait for Snoop Dogg to appear, trailing a cloud of cannabis smoke behind him (thus explaining the long wait.) To go from a handicapped war orphan singing “Imagine” to Snoop Dogg encouraging all the hot girls to jump onstage and shake their thang… come to think of it, maybe it was a good thing that we had a break between the two. A more sudden shift could have caused whiplash, and while there seemed to be plenty of doctors in the house, apparently they were mainly plastic surgeons.

Snoop, in his guise as DJ Snoopadelic, flowed smoothly through a few familiar beats (“Like This and Like That,” “Blow the Whistle,” “Nuthin’ But a G Thang”) and then settled in to actually DJ’ing a pretty fantastic set of mostly ‘90s dance tunes. The crowd was up and dancing on the lawn in the hot sun, and if you can get people wearing their $1000-a-ticket party shoes to dance on dirt, you’re a hell of a DJ. 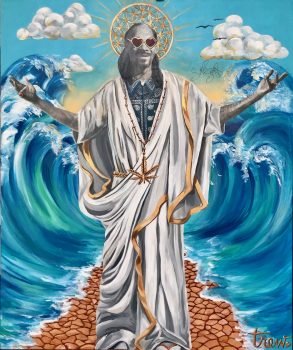 Music continued through the afternoon with pianist Angelo Molino of the Music and Wellness Council and the colorful violin/ukulele duo from Brazil, B2wins. We’ll be checking in with www.virtuoso.gvng.com to see how the fundraising turned out, and following GVNG as they continue to promote good causes and good times.