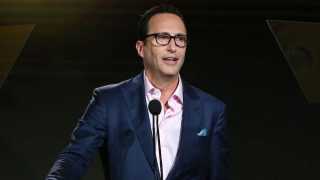 Pasadena, CA (The Hollywood Times) It was a full house in February for Fox’s Television Critics Association event. Fox Chief Charlie Collier was in attendance, and he entered the stage in style: announced by Jonathan Banks, with Prince’s “Let’s Go Crazy.” Which also happened to be the theme of the day.

“Being up here with Jonathan again, I’m reminded that, actually, there’s never been a crazier bet in my career than the one I shared with that wonderful man as the tough guy Mike Ehrmantraut on ‘Breaking Bad’ and ‘Better Call Saul.’” Said Collier. “And believe me, on paper that greenlight, that little meth story, it was nuts. But if there’s one thing I’ve learned in this business, it’s that crazy is in the eye of the beholder.”

Indeed.  “Some said it was crazy three decades ago for FOX to launch a fourth broadcast network,” added Collier. “They said it was crazy in 1993 to pay what would now be a relative bargain, $1.6 billion, to move the NFL to FOX. And look, I’m sure many thought it looked crazy to greenlight a singing competition featuring celebrities disguised as a poodle or a rabbit, a pineapple, and a hippo. And on the business side, some would say it’s crazy in today’s environment to scale down when everyone else is scaling up.”

It all seems to have worked out for Collier, however. And then some. “I’m here today because I believe that this next era at FOX will add yet another risk welcoming, bold bet taking, successful chapter to FOX’s 30 plus year legacy of exploration and investment and innovation.”

Collier’s been busy. He’s been prepping for the close of the Disney deal, about which he quips “We’ll emerge from that free and nimble enough to partner with the best and brightest content creators out there.”

It’s a bold plan, and one that allows the iconic network to continue a “truly valued” partnership with 20th Century Fox TV. However, says Collier, this season viewers will start to see the Fox slate filled with partners as diverse as Universal and Warner Bros., Sony and eOne, among others.

“All of these join an amazing roster of FOX talent that you already know, again, on both sides of the camera,” proclaimed Collier proudly.

So as the development season progresses, Fox executives, according to Collier, “Remained focused on putting together an exciting slate of talent and programs amidst the backdrop of deal driven change and ambiguity. And that is not easy, and I don’t take it for granted. I feel so fortunate to have just that whole team as an amazing group of partners.”

It’s an impressive lineup, from any angle. Duncanville features Amy Poehler in two of the show’s key roles. Bless the Harts features the voices of Kristen Wiig and Maya Rudolph, and  boasts Academy Award-nominees Phil Lord and Chris Miller as executive producers. Both of these shows premiere next season on Fox.

It’s all just the tip of the iceberg. A very large iceberg of quality Fox entertainment, upon which Collier and co. will undoubtedly “go (completely) crazy”.