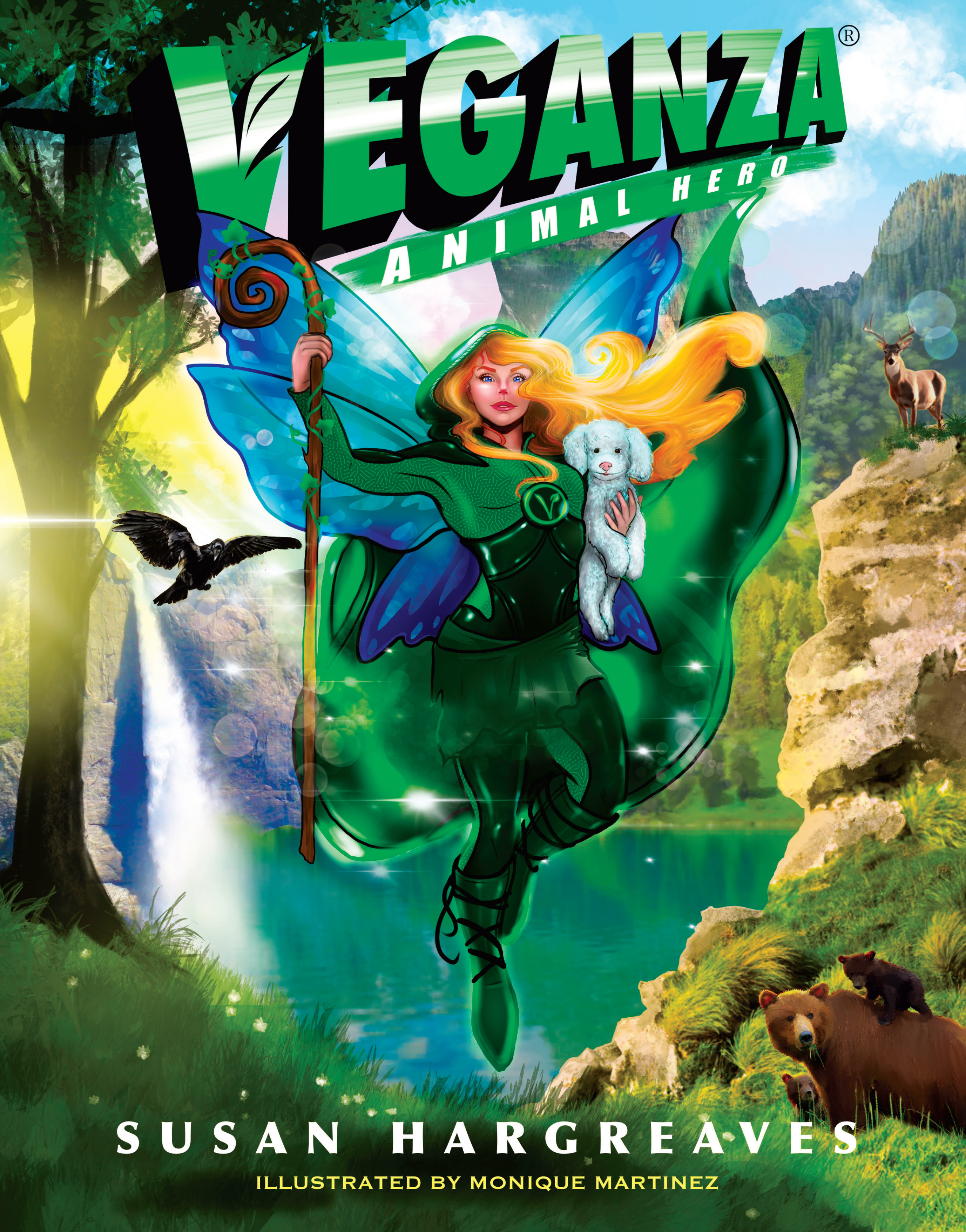 Los Angeles, California (The Hollywood Times) 10/06/2020 – Animal Hero Kids empowers youth to compassionate action for all species and the planet. They are looking for celebrities for voice-overs. In the new book, Veganza, the animal hero,  swoops in to help all animals in need of rescue. Veganza creates more animal heroes by empowering them with empathy. Courage, the mermaid, defends all sea creatures. Together, Veganza and Courage are unbeatable animal defenders. Celebrities including Joaquin Phoenix and Sir Paul McCartney have joined forces with Animal Hero Kids. This month is also #ANIMALHEROKIDSTOBER fun-filled activities and education for youth.

Animal Hero Kids is at the forefront of empowering youth towards animal rescue and advocacy. Tell us about your organization.

Animal Hero Kids empowers youth to compassionate action for all species and the planet. When I was 9 years old I felt powerless to stop the extreme animal cruelty I witnessed during a visit at a chicken hatchery, all the male chicks are gassed as soon as they hatch on conveyor belts. There was nothing I could do, at the time, just watch them struggle and gasp. Animal Hero Kids ensures no-one feels powerless, their voices speaking against injustice will be heard.

We educate and provide the tools and support for them to navigate how to be animal heroes.

We are at a moment where it is more important than ever we act, positively and proactively, each of us.

Thirty thousand students are reached each year with free programs and presentations, I love doing school assemblies. Since 1980 I have presented interactive, creative school programs. Now I have upped my technology game to reach more, virtually. Two school districts in Connecticut just provided “Animal Hero Kids Voices for the Voiceless” Volume 2 in an ebook version to their students. I am their virtual instructor along with Climate Healers, JP Farm Animal Sanctuary, and Animal Hero Kids who live in the area. This is a first and another sign of progress, being accepted, welcomed as more educators are recognizing it is vital to foster empathy, critical thinking leading to increased consideration and kindness.

We welcome volunteers to join us and to participate in helping the goals of gifting an Animal Hero Kids book to every school.

Animal Hero Kids is reaching so many corners of the earth now, so many more, children and teens want to really help animals now, and the increase in vegan kids is a thousand percent! Compared to 1980 when I started, as you can imagine. 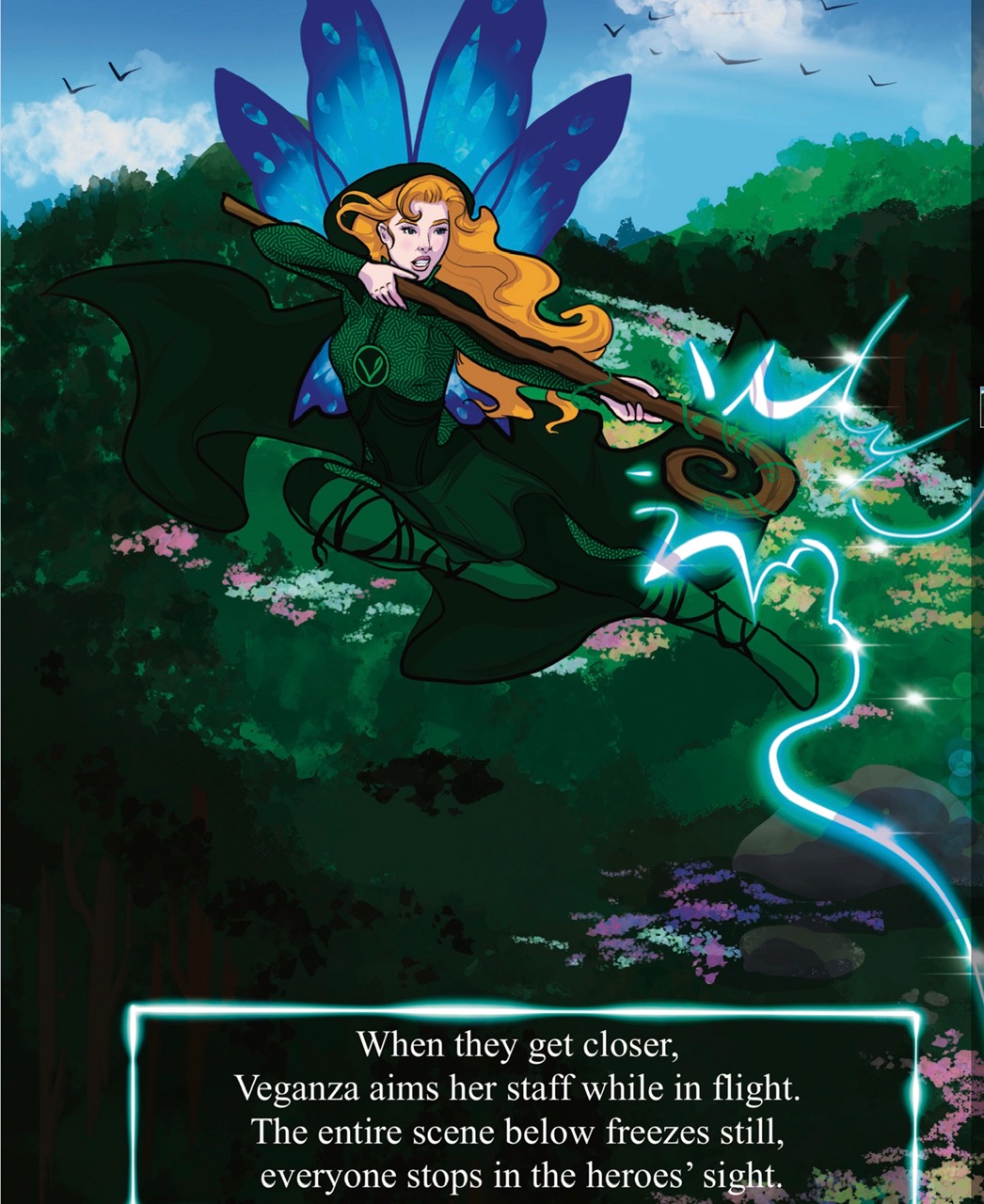 Celebrities have joined forces with you. Why is a celebrity so important to your mission?

Some say, oh, celebrities should keep quiet, athletes should keep quiet…etc I say “THANK YOU!” It is thanks to many of their voices getting the message out about how we need to help animals and the planet that we are experiencing a public shift in how we use and abuse animals for entertainment, “sport”, meals, clothes…

Who wasn’t affected by Joaquin Phoenix speech when he accepted the Oscar for the Joker?

We said goodbye to elephants being abused at Ringling circus, we are looking more closely at taking wildlife from their natural homes for $, there are more vegan replacements for animal meats and cows milk than ever before. Yes, I investigated elephant abuse in 1985 and so many people did protest against the miserable lives they lead. However, I can never equal a celebrity’s public spotlight in terms of reaching people with a tweet.

I am so appreciative of the fact that Billie Eilish tweeted to her gazillion followers about being vegan.

I am so thankful Paul McCartney gave us permission to use his name for one of our awards and a marvelous quote ”Animal Hero Kids Rock. The good news is we can all help animals in need”

The Animal Hero Kids book has quotes from so many celebs and it helps those kids who may feel the odd one out, or alone at their school, it is encouraging, it is priceless. I am so fortunate to have their help, as we are a grassroots, small budget with a huge mission. 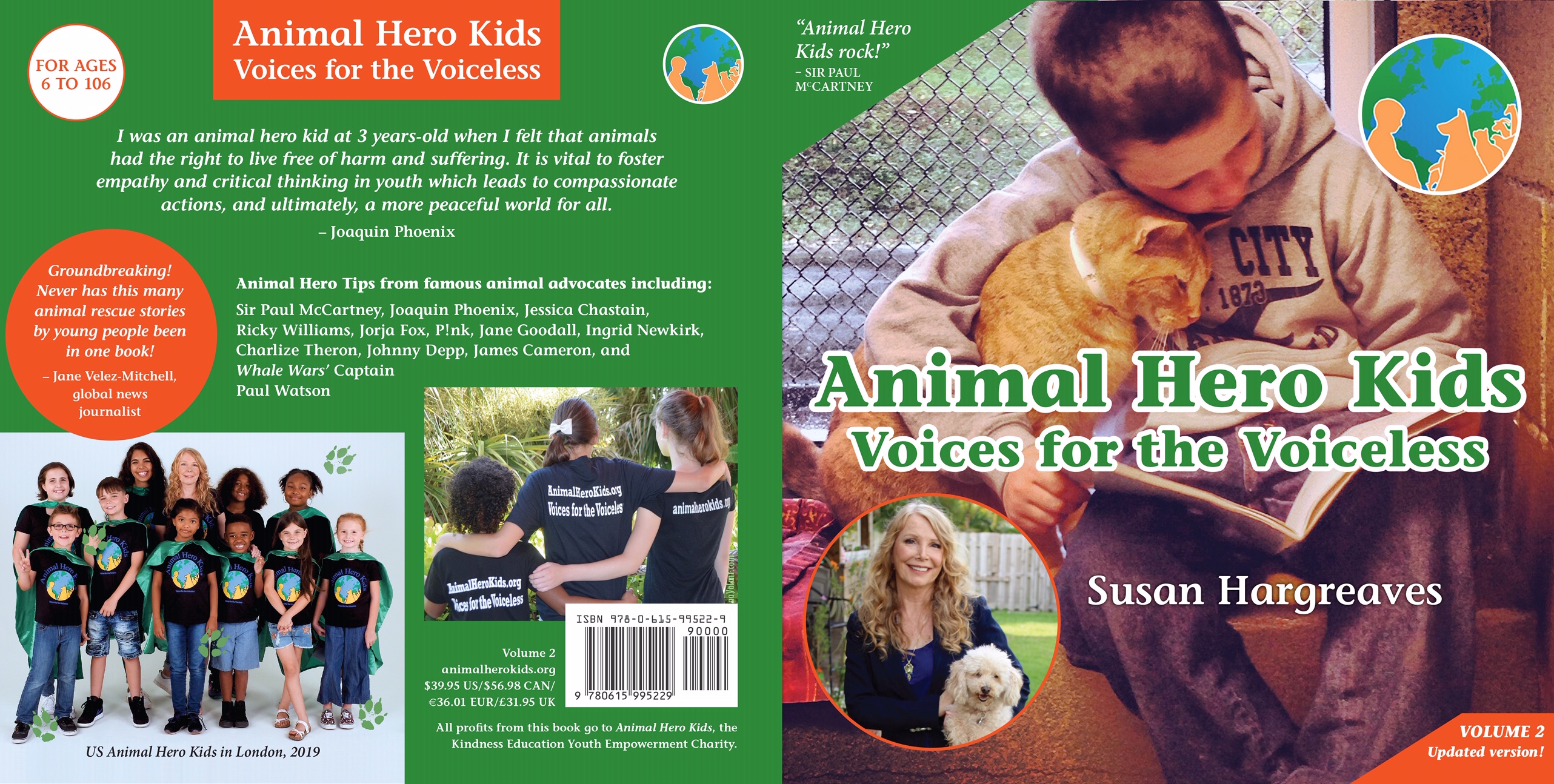 Tell us about Veganza, the first vegan woman superhero. (your thoughts on a celebrity voiceover and why it is so important) How can they reach you?

In 2014 I created a character who is a grown-up experienced, powerful, determined woman. Her mane was Saoirse, I am sure most of your readers do not know what that name means. Freedom in Irish.

Now Veganza, the animal hero, swoops in to help all animals in need of rescue. Veganza creates more animal heroes by empowering them with empathy. Courage, the mermaid, defends all sea creatures. Together, Veganza and Courage are unbeatable animal defenders. 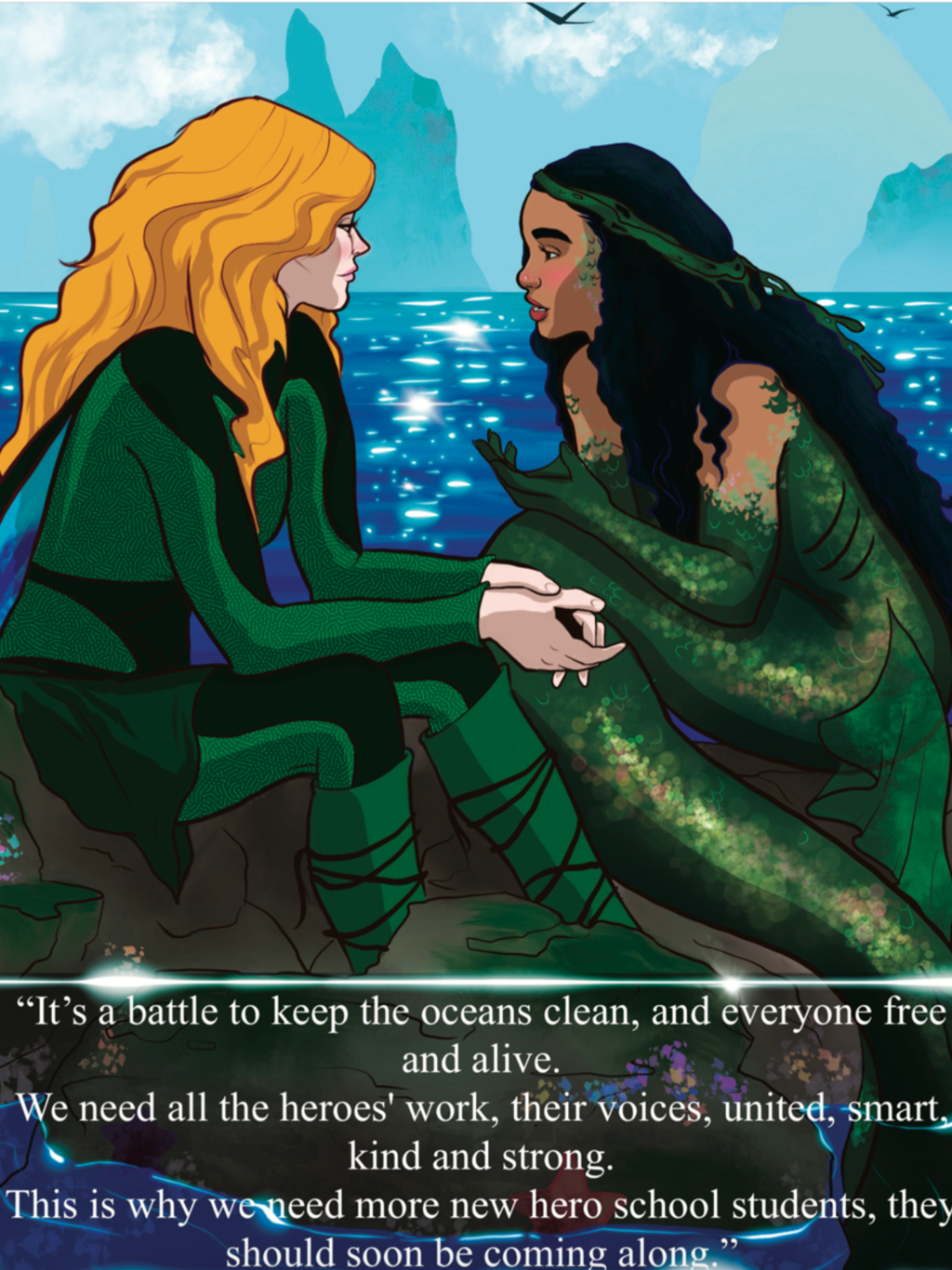 I am thrilled we will also be creating a claymation short, our last film was adopted by 430 schools. This is the first fantasy, action-adventure. The claymation filmmaker Wyatt Bergwin graduated from film school in NY in the midst of the epidemic and was driving back with his old rescued cat in his car when I happened to be speaking to his mum about volunteering for Animal Hero Kids. It turns out that more than 20 years ago one of my presentations was at Wyatt’s prep-school, he remembered the lessons of being kind, and his mum and sister are advocates for other animals. So, he is creating Veganzas’ forest home and all of the characters for the claymation now. I can’t wait to see Veganza come alive in this claymation medium.

We need professionals to make it the best it can be.

Veganza, Courage, the brown vegan mermaid, Jules the crow, Lovey the 18-year-old poodle rescued dog, who is the narrator in the story, are the characters we are searching for voice-overs. It is 6 min long, so, not that much work, yet, the return, if a celeb collaborates with us, will be considerable. So, Leonardo, Ellen, Viola, Meryl…and all the mindful celebs, lend your voices and help animal hero kids empower youth to compassionate action.

If you want to educate and empower youth to kindness to all this is your opportunity!

It is #ANIMALHEROKIDTOBER, what are some of the fun and educational activities that you have planned?

In New York, a group of socially distanced youth will visit Tamerlaine Animal Sanctuary and video some song phrases for the Veganza Animal Hero Sing Challenge, in Japan, an Animal Hero Kid will interview a vegan chef and record an Animal Hero Kids FB page. I will also be surprising someone, I can’t say who, or it would not be a surprise!- with a “Kind2All Evolve” award for taking a formerly meat-centered iconic riverside restaurant in Fort Lauderdale into a vegan cornucopia. 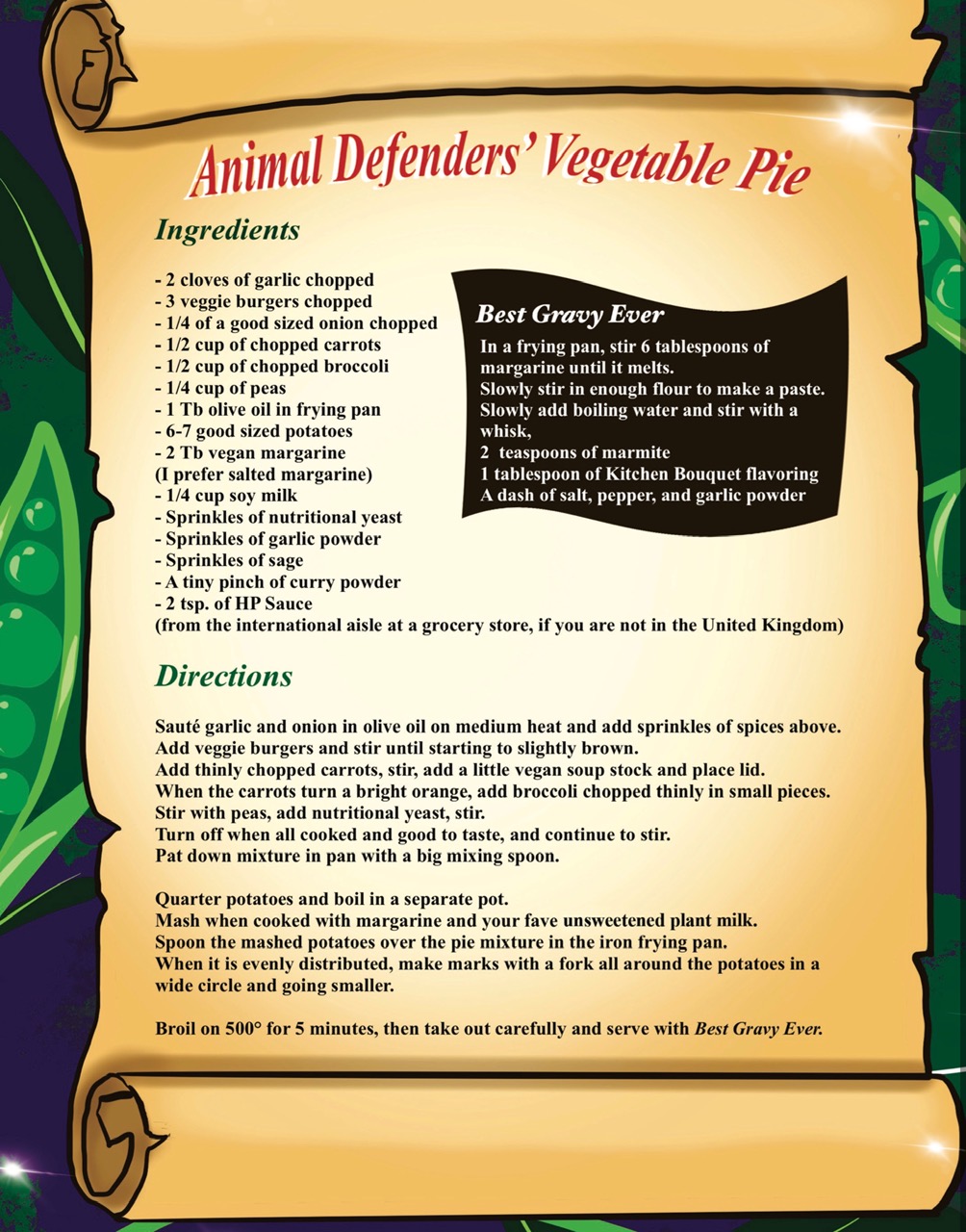 Animalherokidtober will also see the first-ever, virtual, multi-org collaboration school enrichment program where I am one of the instructors and the students are using the Animal Hero Kids ebook version. They are so happy to introduce their companion animals from home.

There is even more going on that if I continue answering I will end up creating another book, right here, suffice to say, I am thrilled at the response and the potential. We encourage people to sign up to participate on the animalherokids.org website. Many individuals are sponsoring the Animal Hero Kids book as a gift to their local school library, the goal is each school will have a copy of the book to serve as a resource.

One of our newest Animal Hero Kids lives in a very small town in Alaska and discovered there are other children who feel the same way about stopping animal cruelty after discovering the book in her library, I received a phone call from the mum and daughter who were so enthusiastic about the guide to be an animal hero.

Ian and Khendall, 8 and 10 years old, will be donning hazmat suits and goggles to make a statement about the links between pandemics and eating animals, they will be educating from a safe social distance about SARS, MERS, COVIDS, bird flu, swine flu all stemming from eating animals. You can watch a video Animal Hero Kids made all about this issue.

Tell us about “National Take Your Parent(s) to a Vegan Lunch Day on Oct. 14th.” What are some of the yummy recipes in your book?

This is an opportunity for youth to treat their parent (s), whether they create a wonderful plant-based meal at home or take them out. Throughout all of the activities people will be posting their own photos and using the hashtag #animalherokidtober Everyone can participate, no matter how old you are by posting pics of your own plant-based meals, or applauding a youth they may know who is compassionate. You would be surprised at how many of the animal Hero kids and teens are accomplished vegan cooks. In the Animal Hero Kids book, there is an entire section on vegan recipes by kids for kids. In the newly released Veganza Animal Hero there are also fav vegan recipes from the characters in the book. Kingston is one of the Animal Hero Teens whose chickpea vegan mayo hero subs are featured in the animal hero kids book. 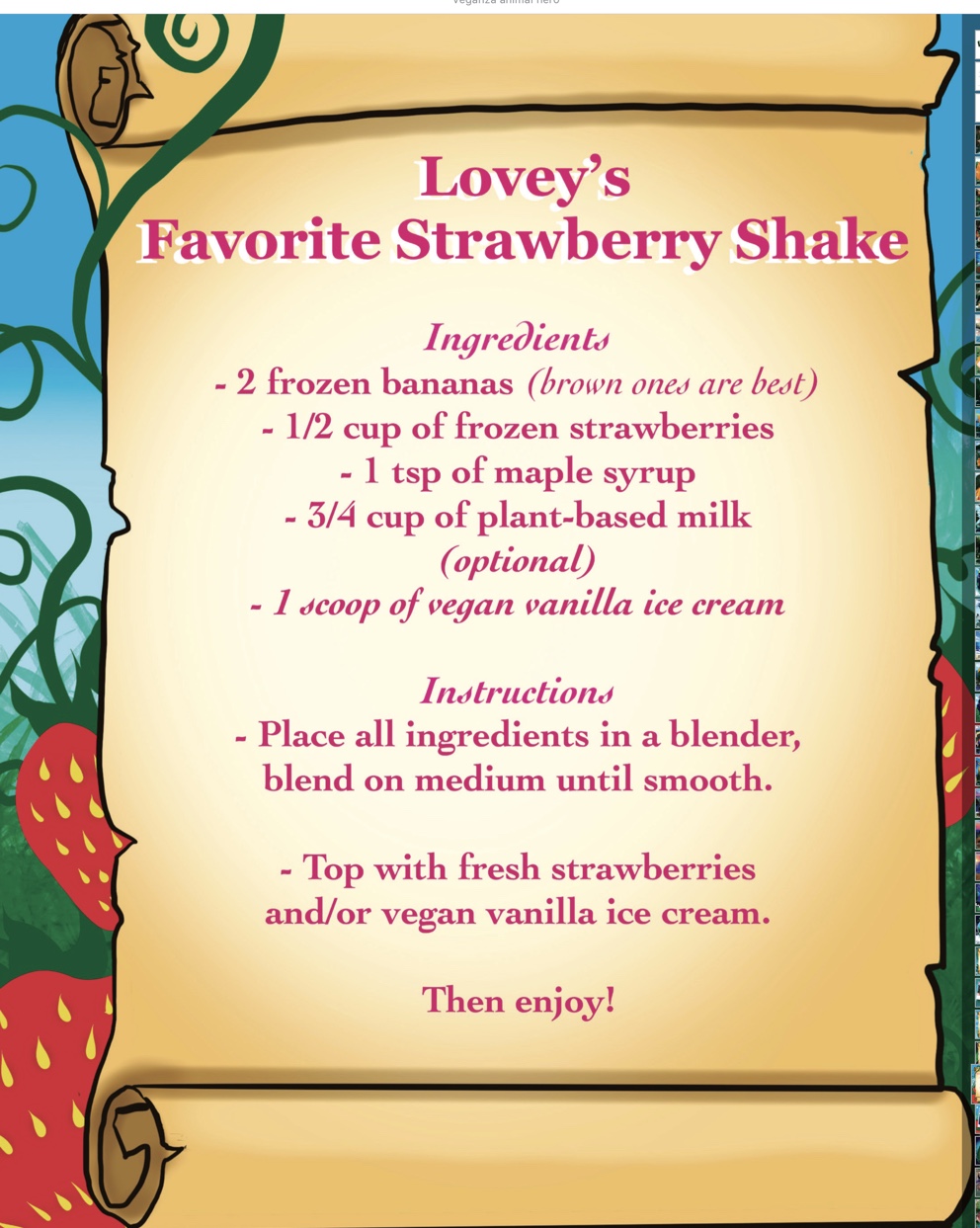 What is your hope for #ANIMALHEROKIDTOBER?

I would like #animalherokidtober to be as popular as Octoberfest without the beer and add vegan sausages, kidding! There are so many ‘days” “months” dedicated to different themes, why not a month celebrating compassionate action by youth? We are at a time we really need to focus on kindness towards all.

We are reaching more corners of the world than ever before, we had to pivot to change many of the activities to be virtual, socially distanced, yet, we have succeeded in making #animalherokidtober more accessible. When the media picks up the stories around World Animal Hero Kids Month then we are reaching even more. We all need to look around and say, how can I make this world kinder for all species and the planet, we are at a critical point. So, check out animalherokids.org to get involved. 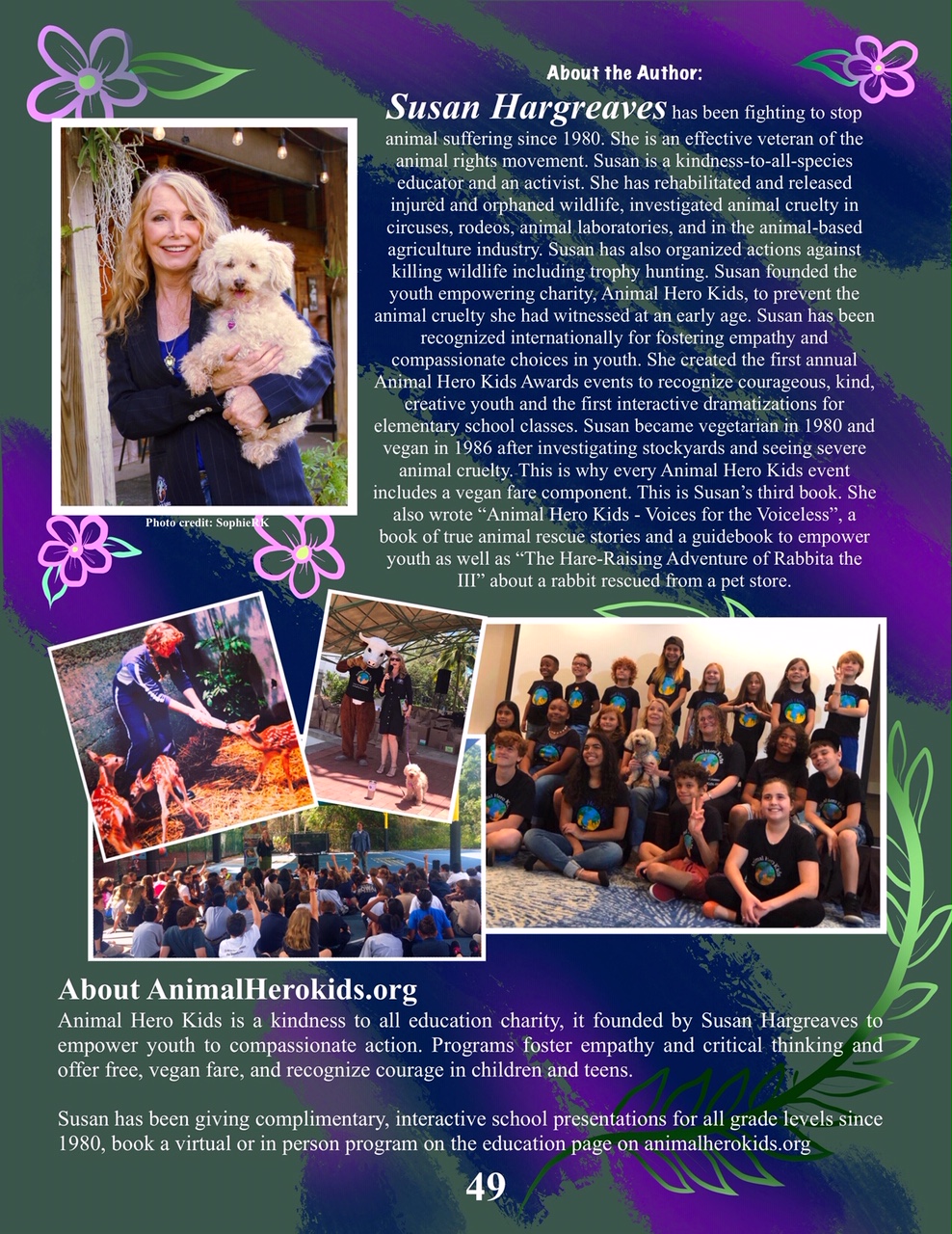