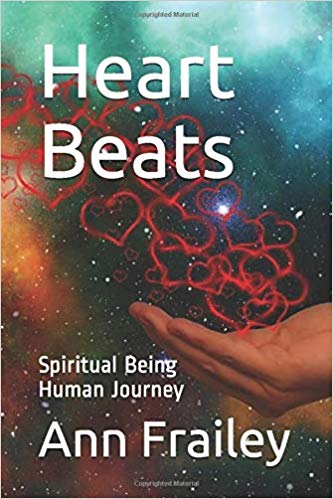 Los Angeles, CA (The Hollywood Times) 2/18/20 – Tragedy struck Catholic Sci-Fi Author, Ann Frailey and her family in 2013. “Since my husband passed away from Leukemia six years ago and I was left to raise my family of eight kids as a single parent, I have discovered that the impossible is indeed possible. For me, that means I rely on the strength of God to empower me to fulfill His mighty will.”- Ann Frailey

“My life is rarely what I envision or expect. But as my kids have grown and moved into the world, I have been able to enter into the community, serving as an election judge and secretary/treasurer of the cemetery board, among other opportunities. Life is an awesome journey.”

You were a teacher. In 2013, tragedy struck and changed your life. Tell us about it.

Ann Frailey:  Four years earlier, when my eighth child was seven months, my husband John came down with what we thought was a cold. In those days, he was known in the homeschooling circles as an Amish Paul Bunyan, so we didn’t worry about it. But the cold grew worse, and before we knew what was happening, he was diagnosed with Acute Leukemia.

As a homeschooling mom with eight kids, the eldest being thirteen at the time, I wasn’t prepared for what lay ahead. None of us were. The following four and a half years revolved around John’s hospital stays and my taking over the complete care of the kids, the school, and our mini-farm.

About a year after his bone marrow transplant, John’s body went into rejection, and his last months were extremely tough. December 15th, 2013, he died in an emergency room.

Having to watch a strong, loving father suffer, and then—despite his most valiant efforts—succumb to cancer, felt like being caught in a nightmare that would not end with the morning. My children ranged in ages from seventeen to five when he died, and even though I had learned a lot in the years of his sickness, there is no real preparation for being a single parent. Parenting is an awesome job under any condition. Single parenting eight grieving children is a challenge beyond words.

What challenges did you face and overcome during that time?

Ann Frailey:  Physical realities took precedence. I had to fix a leaking roof, deal with broken vehicles, and clean out a variety of messes that we couldn’t deal with during John’s final years. I also had to take honest stock of what I could and could not handle. John had raised bees for honey. Though my eldest sons could do a lot, they were trying to prepare for college, and I simply couldn’t manage the hives by myself. So I let them go wild. I also had to give our milk cow to a neighbor who could take care of her. We did keep the chickens, the garden, and managed to attend to many home and land issues.

The older kids moved on from our homeschool high school and entered colleges, winning scholarships for their tuitions. Initially, I felt terrified that I couldn’t provide properly for their education, but their industrious natures and good brains (Inherited from their dad!) made all the difference.

Since the younger kids didn’t get to see their dad often, as he was in the hospital so much and then died when they were so young, I worried about their development. But the older four kids have done amazingly well, being more than just siblings. They have been mentors and friends to their younger brothers and sisters.

The unexpected challenges list could fill pages, but grace is lived moment by moment. It is truly a walk-on-water experience.

How did you overcome your grief?

Ann Frailey:  Endurance and time. There is no magic pill or self-help theory to make aching loss any less profound than it is. But in suffering through pain and trial, facing the monster that seemed to chase me down the byways of life, I was able to grow into a new person. A stronger person. Surprising myself in the process. I never expected to learn all the multitudinous uses for duck tape, that I could wield a caulking gun effectively (without anyone getting hurt), that I could hire workmen to fix leaking pipes, and manage critters who seemed able to spontaneously reproduce without warning.

I retreated into my world of kids, school, home, and family needs, focusing on daily duties. Keeping the wood fires burning (literally) in the winter and canning garden produce in the summer. I worked hard. The kids worked hard. We learned to celebrate small victories with picnics under the grape arbor, barbecues, trips to the local lake, and casual get-togethers, laughing and sharing inspirational poetry, stories, and music that caught our attention and engendered growth.

In the end, the free will choice to live intentionally and passionately has healed us and grown us into new people.

You have authored 10 books. Do you find writing therapeutic?

Ann Frailey:  John suggested I write and publish my first book The Road Goes Ever On, A Christian Journey Through The Lord of the Rings. I would never have accomplished that mighty task without his support. I wrote in response to real-life issues. At that stage, I had no idea what was hurtling down the road or how writing would aid me in the coming years.

I started writing historical fiction and finished a trilogy before my husband died. The writing process allowed me to sneak off into another world and enflesh critical issues in a new setting. It was very therapeutic in that I could rise out of the immediate situation and consider conflicts from a wider perspective. That gave me breathing space. And a mental and emotional break.

I sometimes fantasize about spending a few days staring at the ocean, away from the strain of daily life, but then I realized, I could write that peaceful scene into my world. I could go anywhere in my imagination and fight a whole slew of terrors through my characters.

Which is your favorite story?

Ann Frailey:  Though it is not the most cheerful of my books, Last of Her Kind was perhaps the most profoundly personal.

A friend I had not seen in years called shortly after John’s death to tell me how sorry she was to hear the news. At the end of our conversation, she asked about a story I had written nearly twenty years before, saying that it still replayed in her mind. I had destroyed the work long before, thinking that it was no good. She insisted that I pick it up again.

But I was a very different person at that point, and I realized that my writing skills needed to grow to tackle the story well. So I went back to school and earned my Masters in Creative Writing for Entertainment.

Last of Her Kind deals with an end of times scenario, environmental and cultural issues, the hopelessness of despair, and the rebirth of life-based on something bigger and more honest than anything we had ever known as a human race. My writing genre moved into science fiction with the Newearth world and aliens who come to dominate Earth while a human remnant reinvents their identity.

The power of free will—to choose how we live beyond the messes we have inherited, the wounds we bear, the grief of loss, allowed me to create a new, challenged but valiant world through my writing.

In Last of Her Kind, I rediscovered my sense of humor and a love for life I thought was all but dead. Using the skills I learned in my graduate classes, I even wrote a feature film screenplay based on the novel.

What have you learned about yourself as a single parent of eight children?

Ann Frailey:  I have learned that the impossible is indeed possible if love is rightly applied. Love is not ownership or pride. Love is self-sacrifice and honesty. I give my kids the tools they need to become successful citizens—a wide-based education and good habits. I offer my love and praise daily. I also value the necessary emotional distance to allow them to spread their wings, take their paths, and love me back as they choose to.

Being a parent is not being God. Though sometimes it feels like it— without the fringe benefits. I have learned to parent myself in the process. I have made thoughtful friends, and I continue to grow my own personality. Writing and online connections help, but now that so many of the kids have grown and are moving on, I’m branching out. Reaching out. Allowing God to develop me through new personal relationships and experiences.

I did not die when my husband passed away. I’m also learning that I am more than “Mom!” Which is a good thing. Parenting is awesome. But there is a world of other relationship possibilities I’d love to explore.

Tell us about your “HeartBeats Series.” What is special about it?

Driving home through the countryside one day, I noticed a little girl on the edge of a long driveway wearing bright-colored clothes and dancing. Her abandoned to some inner music transported my soul.

Inspired, I started what I call HeartBeats, reflections on experiences that motivate me to grow in faith and hope, despite whatever trial or tribulation the world might throw at me that week.

This last winter, I collected these blog posts and compiled them into a book. So far, readers have given me outstanding reviews. For which, I am mighty grateful!

I also write short stories that reflect life struggles, and it is through these short works that I have grown the most as a writer. So I compiled those stories into a book, What Might Have Been and Other Short Stories.

I write new stories and Heartbeats alternating every Friday and post them on my website and through Medium.com.

Please share your most recent book and your hope for the reader.

Ann Frailey:  After my graduate work, I decided to retire my original historical fiction trilogy, and I rewrote each novel incorporating the Newearth world as a backdrop. I pray to God that my writing style is more visual and active, and the books have developed deeper dimensions. So far I have completed Oldearth ARAM Encounter, OldEarth Ishtar Encounter, and I am currently working on OldEarth Neb Encounter.

In the continuing story of Last of Her Kind, I moved the story forward with a sequel, Newearth—Justine Awakens. I also wrote a season’s worth of television screenplays based on that work.

I hope that readers will see the connectedness of our universe. Not just the possibility that there may be other life forms “out there” but that we as a human race are connected through time and experience. In realizing our relatedness—not a fanciful “Let’s all hold hands”—but the reality of our shared being-ness. That what each of us does individually, profoundly affects the whole of us. We will either staunch the flow of self-destructive tendencies that will one day seal our fate.

What is the best piece of advice you have received?

Ann Frailey:  I have read the memes—“Don’t give up.” “Be strong.” “God doesn’t give you more than you can handle.” And so on.

But in reality, I have given up more times than I can count. I know I’m very weak. And God has most certainly given me waaaay more than I can handle. But as I cried out to a friend once, “I can’t do this!” She just smiled in her drive-me-crazy-way and shrugged. “True. But you’ll try anyway.”

Ann Frailey:  So many times I thought that I knew how things were going to turn out, and I was surprised by unexpected reality. Wonderful and terrifying. We do not see all ends. Thank God. – Love anyway.