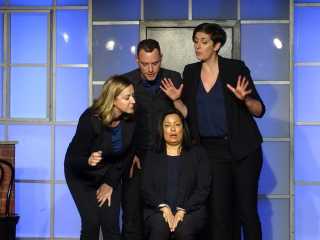 Hollywood, CA (The Hollywood Times) 5/27/19 –  Back in the ‘80s, Second City’s Rick Moranis and Dave Thomas lampooned Canada on SCTV’s “The Great White North.” Today, their comedy heirs at the Second City stage in Hollywood are skewering both Canada and the US in “Canuck as F*ck,” a sketch show whose run was just extended through August 17 because… basically, it’s really good. Smart, funny, and a cheap date on a Saturday night. And I don’t just say that because I’m Canadian.

“That wasn’t my original title, by the way,” says director Doug Morency somewhat apologetically, “but they wanted something… eye-catching.” Morency, you will not be surprised to hear, is also Canadian.

Actually, the entire company of the hour-long show are ex-pat members of Second City’s Toronto company, recently come south to seek their fortunes. “We joke about America,” says cast member Ayumi Iizuka, “but we made a great effort to be here.”

Intra-cast joking about Canadians on the loose in Los Angeles eventually grew into a tight hour of sketches and songs. Second City’s version of improv isn’t the “shout out a profession and a place” kind. It’s comedy that develops from spontaneous interactions workshopped until, once onstage, they are 90% scripted and 10% where-the-spirit-moves-ya.

While all of the bumper music is Canadian content — Gordon Lightfoot! Alanis Morissette! Bachman Turner Overdrive! — the comedy ranges wider than that. They take aim at the usual political targets, like the news report about Godzilla loose in Washington DC (the monster acts remarkably like a certain President) or the aftermath of a mass shooting at an NRA meeting. But they are equally effective making fun of the human condition, like when a “butter sandwich” of Anglo co-workers (Jason DeRosse, Paul PK Kingston, Allison Price and Leslie Seiler) take DNA tests and become overnight minorities.

The best-received sketch of the set (and my personal favorite) was entirely apolitical, about a man (DeRosse) who doesn’t believe in love at first sight until his fiancée (Seiler) brings him home to meet her mother (Iizuka.) A lot of Seiler’s jokes were created on the spot, and her delighted co-stars often had trouble holding in their own laughter.

Second City, as you know, started in Chicago in the 1960s and gave us a wealth of talent including SCTV’s Harold Ramis. Eugene Levy, Catherine O’Hara and John Candy; SNL’s John Belushi, Bill Murray, Dan Ackroyd, Gilda Radner and Mike Meyers; and Stephen Colbert, Steve Carell, Keegan-Michael Key and Tina Fey. Along with permanent stages in Chicago and Toronto, they have four international touring companies. But perhaps most exciting for Angelenos, they also open their doors to aspiring actor/comedians with writing, music and directing programs at the Hollywood location, as well as summer camps for kids and teens.

You should catch “Canuck as F*ck” before the inevitable happens: The talented cast will all get sitcoms, buy houses South of the Boulevard in Sherman Oaks, and give up poutine along with all other carbs. Oh, and they do plan to become US citizens. “So we can vote,” winks Price. 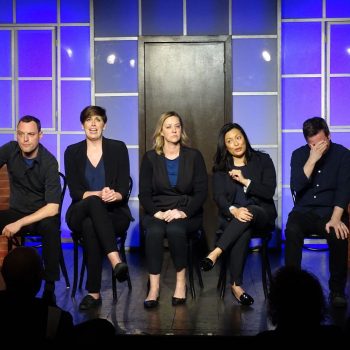 Saturdays at 7pm through August 17