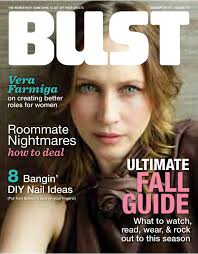 By Kate Kight and Valerie Milano

NYC, NY (The Hollywood Times) 4/3/17 – The first thing you saw walking into Bust’s Primped Craftacular was a giant “nasty woman” banner, draped across a booth. A sure sign that, just like Bust itself, this day of primping would carry an undercurrent of feminist resistance. Sure enough, the booths were a mix of local and vintage couture, handmade jewelry, and full-on feminist statements. 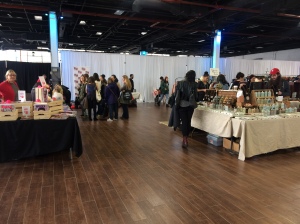 While the term “crafting” often connotes hot glue and a messy scrapbook, artisans at this Craftacular were offering goods of the highest caliber. Delicate hand-stamped jewelry, curated vintage clothing, and luxury make-up were all on offer, along with truffles, empanadas, and craft cocktails. Mixed throughout were symbols of feminists creating space for themselves: T-shirts that read “Black Lives Matter”, clothing that welcomed the full-spectrum of genders, and posters emblazoned with a raised fist within the woman’s symbol. 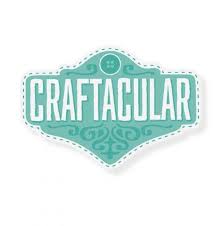 What is it like to be a female entrepreneur in the age of Trump?
“It’s a very charged time,” said Debby Allen of HISSYFITCVLT. Yet her outlook was hopeful, “There is community building.” Her words encapsulated much of the Craftacular experience. Despite the anti-feminist agenda of the current administration, community building was everywhere. Women of all ages painted their nails at Floss Gloss’s nail bar, families browsed through hand-printed onesies, and groups clustered for selfies at Bust’s step and repeat. 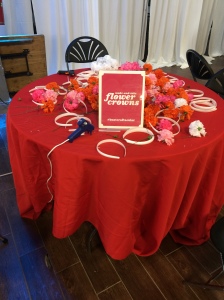 Not every booth was selling goods, either. Two young activists were passing out pamphlets for Denim Day, an annual rally during sexual assault awareness month. In New York City, thousands will gather on April 26th clad in denim jeans. The jeans represent an Italian court’s verdict to overturn a rape conviction because the survivor was wearing jeans that were too tight. t was a solemn reminder, in a space filled with high fashion, that women’s bodies are so often the epicenter of political oppression. An oppression heightened for those in the LGBT community, for women of color, or gender non-conforming individuals. 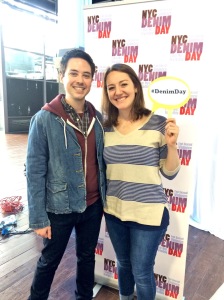 A space dedicated to beauty and fashion may seem the exclusive province of femme women, but not at Bust’s event. “Intersectional feminism is the only real feminism” said Alan, owner of Feminist Apparel. His range of t-shirts and tanks, emblazoned with messages like “Pussies against Trump” and “Pizza Roles Not Gender Rolls” are an effort to spark conversations offline, though he did not discount the importance of social media in the future of feminism. “Social media will get better at showing us how people live, and become a more powerful tool for promoting intersectional feminism”. Certainly Mike Pence would be shocked to see this room filled with individuals of all different sexualities and genders, intermingling and celebrating their beauty and power. 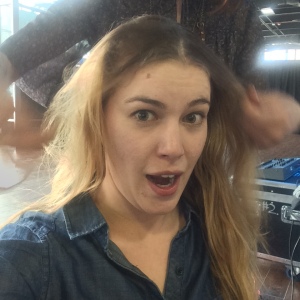 In this space, there was no discomfort with the balance between prettifying and protesting. For many of us, those actions were the same. At the popular Bangs and Braids bar, hosted by Fringe salon, I asked if it was true that many women were seeking drastic haircuts in response to Trump. Certainly, in the  days after Inauguration Day, owner Amy Schiappa said, women came in asking “Just cut my hair!” Was it just about regaining a sense of control, or could a haircut itself be an act of defiance? 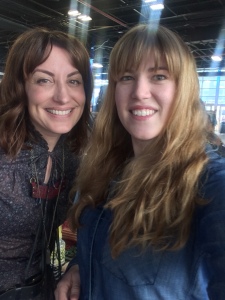 “We want to be our kind of pretty, not their kind of pretty” she told me. Hairstyling is her art, and her art is resistance- so I decided to give it a try. As she trimmed my tangled hair we discussed the variety of emotional responses we’d endured in the weeks since November 8th, the fear and the power of simply existing and creating in the era of Trump. My dramatic new bangs certainly felt like an act of defiance against the status quo, but even more powerful was the sense of community I felt from being a part of Amy’s salon. Taking the time to get a haircut can feel like an act of self-indulgence, but self-care is never a waste of time, supporting woman owned businesses and artists is never a waste of time, and the sense of empowerment from sharing a moment of politics and personal style lasts long after the shears are put away. And it helps that Amy cuts some sweet bangs! 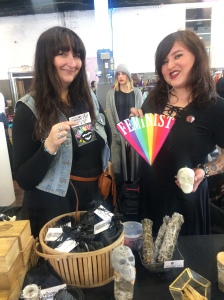 Tracy of Lash Star Beauty gave me new bold brows to match my bangs, and her outlook on America’s situation was bleak. “It’s just awful”, she said. Yet when she spoke of her just-launched make-up line, her voice was full of passion for her craft. What greater act of defiance to this administration than women following their passions and empowering each other to be creators?

Tracy is a celebrity make-up artist who just launched Lash Star Beauty, and isn’t letting despair over Trump stop her from following her dreams!

I spent the day doing nothing but primping and pampering myself, and yet I left the Brooklyn expo center feeling empowered- not just from my makeover, but from the inspiration all the crafters and creators left me with. In a world in which women’s bodies are policed, from clothes to make up to literal laws legislating our sexuality, caring for myself felt radical.

Women, particularly women of color, LGBT women, and immigrant women will continue to face threats from this administration. The privilege of having time to primp is not one we all have, but we can all take inspiration from the woman who are creating spaces dedicated to radical self-love, empowerment, and community. 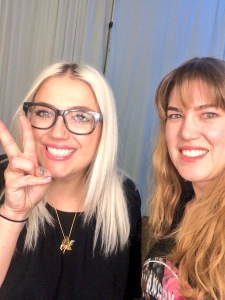 The patriarchy encourages us to judge each other for how much or little make up we wear, for the choices we make with our bodies. Committing to loving our own bodies, fearless of judgment, is a step towards dismantling that system. If we can cease to judge ourselves, it is possible to cease judging others and create spaces where self-care and connection are truly valued. Bust Craftacular’s Primped was one such place.