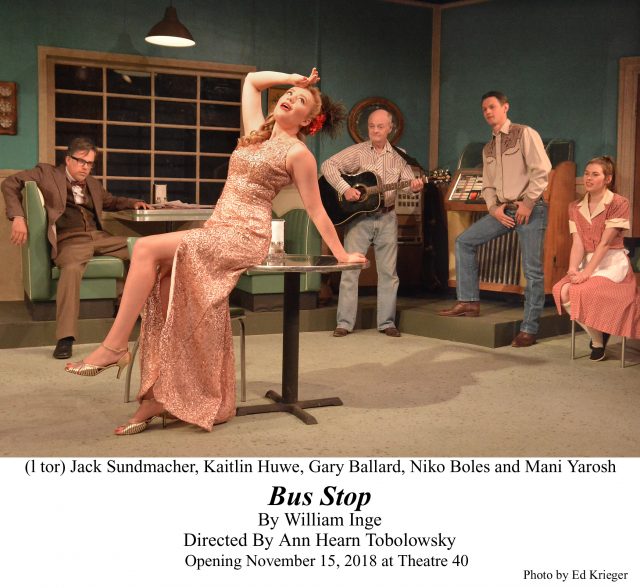 Hollywood, CA. ( The Hollywood Times) 11/19/2018- “ Bus Stop entertains easily on the level or romantic comedy. Although the play was written in 1955, it highlights many issues women struggle with today: “power, consent, and carving out their own rules as they make their way in the world,’’ says director Ann Hearn Tobolowsky.

“But the play also resonates on a metaphorical level. Bus Stop presents a group of travelers, some strangers, who for a few brief hours, seek safety, assistance, or merely endurance as they wait to continue on their journey,” she continues. 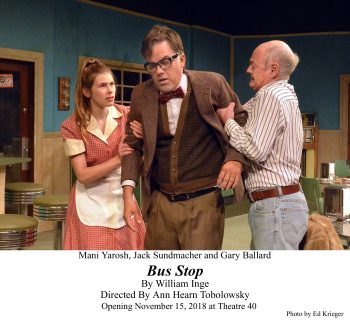 I have seen other productions of this play and the movie directed by the great Joshua Logan and starring the one and only Marilyn Monroe. Of course my expectations were high, and even though I told myself to treat it as a unique experience, I knew that the moment Cherrie walks on stage I’ll be be comparing her every move and every breath to Monroe’s, who in my eyes is the ultimate goddess. I know it’s probably unfair, but it’s the risk you take every time when you direct something that’s become a classic, or you play a part that was once played by a movie star. People will always compare.

The moment I saw the elaborate set of the 50’s diner, I knew it was gonna be a wonderful experience. I’m so taken aback by the very first scene and the cheerful, energetic and joyous energy that Elma (played by Mani Yarosh) exudes that I forget about all the expectations that I have and all the previous productions I’ve seen. Her scene partner Michele Schultz, who plays Grace, is equally good and the duo carries the opening scene with ease and finesse.

Later we’re introduced to the local Sheriff (Shawn Savage) and the bus driver Carl (David Datz), followed by the passengers- Cherrie, a troubled Southern songstress who is being abducted by Bo Decker. And guess what? I’m not thinking or comparing Kaitlin Huwe to Marilyn at all. She’s brilliant in her very own way, and I believe every single word she says. The second character from the bus is Dr. Lyman, a very complex character portrayed by Jack Sundmacher. Bo And Virgil enter last (Niko Boles and Gary Ballard). All in all a lot of great performances and strong choices- the cast is truly amazing.

An exquisite moment that made this production more than just good and well executed, was Mani Yarosh’s reading of Juliet where all of a sudden she masterfully transforms herself into a different character and her vulnerability and openness shows the huge range of her acting ability which honestly blew my mind. 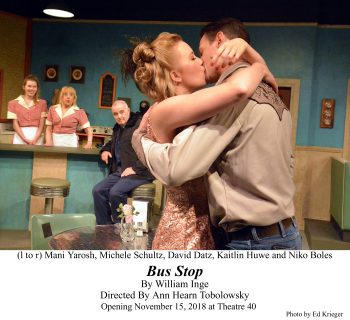 Jack Sudmacher finally dropping Dr. Lyman’s pretense and collapsing at the end of the scene was also truly beautiful.

And Kaitlin Huwe’s musical number was the icing on the cake- very sultry, sensual and what a beautiful voice!

Bo’s tender moments were touching and his and Cherie’s last scene was the perfect ending that I was hoping- very intimate, real and delicate.