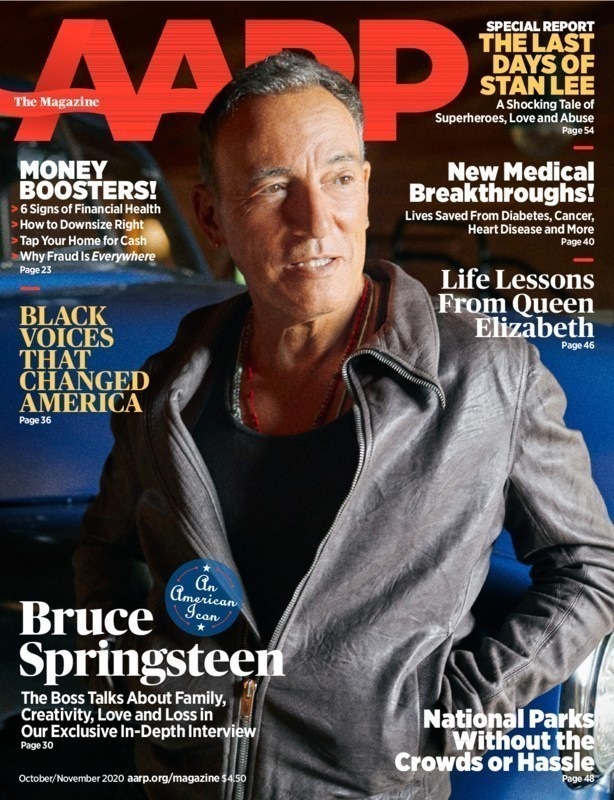 EXCLUSIVE: Bruce Springsteen Shares About Love, Loss, Aging and the Challenges of Writing his New Album in At-Length Interview with AARP The Magazine

LOS ANGELES— Music legend Bruce Springsteen, known for hits including “Born To Run,” “Thunder Road,” and “Badlands,” as well as five decades of exhilarating live performances, is making an exciting return to his native genre with a new rock album, “Letter To You,” releasing Oct. 23. The 71-year-old welcomed AARP The Magazine to his New Jersey farmhouse overlooking 378 acres of beautiful horse country, for a socially distanced conversation on his career, family, marriage, friendships, new album and more.

With 20 GRAMMYs, two Golden Globes, a Tony Award, an Oscar, inductions into the Songwriters Hall of Fame and the Rock and Roll Hall of Fame and more than 150 million records sold worldwide, Bruce Springsteen is a music icon. In his 20th studio album, “Letter To You,” the esteemed songwriter and the E Street Band make a powerful return to rock ‘n’ roll with 12 new tracks that touch on the great mysteries of life and death, the shedding of past lives, the passage of time and looking forward.

The following are excerpts from ATM’s October/November 2020 cover story featuring Bruce Springsteen, written by Editor in Chief Bob Love. The issue is available in homes starting in October and available online now at www.aarp.org/magazine/.

On his return to writing rock and roll songs:

“It’s part of the anxiety and mystery of the job that I do – which is a magic trick, because you take something out of the air that isn’t there… You can go for long periods without picking up anything significant. Or you’ll just pick up different things. It’s like you’re in a mine and one vein has gone dry, so you tap into another. A pop vein or a folk vein, and so you start working there. … But because I am primarily a rock ‘n’ roll musician when I’m operating sort of at my peak—I like to…every once in a while, come up with some rock songs.”

On his long career:

“I heard something of mine from 1975 on a record the other day, and I said, ‘That was about seven or eight lives ago. It was a full and entire life of its own.’ And I lived that one, and it was a great one, and now I’m living another one. I lived a life where we raised our children. That life is gone now. Now Patti and I are living another life. So, you live a lot of lives over the course of your one life.”

On loss of loved ones:

“You have your antenna out. You’re just walking through the world and you’re picking up these signals of emotions and spirit and history and events, today’s events and past remembrances. These things you divine from the air are all intangible elements: spirit, emotion, history. These are the tools of the songwriter’s trade before he even picks up the pen.”

On recording new album, “Letter To You”:

“We spent one week in the studio—five days—and cut the entire record. It was all live, no overdub vocals and just a few overdub instruments. It’s the first truly live, in-the-studio record of the band we’ve ever made.”

On self-care and therapy:

“The talking cure—it works. But you’ve got to commit yourself to a process. And I was pretty good at doing that. I enjoyed the investigative examination of issues in my life that I didn’t understand. I learned a lot and therefore was able to exploit what I had learned and turn it into a real life.”

On his post-pandemic plans:

“All I can tell you is, when this experience is over, I am going to throw the wildest party you’ve ever seen. And you, my friends, are all invited.”

Through four decades, Bruce Springsteen has served as a cultural phenomenon (twice, at least), a brittle and dark acoustic storyteller, a folk revivalist, a new Dylan, a working-class hero, “rock ‘n roll future,” a force for political and social change, an eloquent songwriter and unabashed party-rocker (often in the same song), a live performer of legendary energies, and a prodigy and preacher of the “majesty, the mystery and the ministry of rock ‘n roll.”

But before the majesty, there was just New Jersey: Springsteen grew up and first assembled his E Street Band —many of whom remain onstage in 2012 — on its beaches and in its boardwalk clubs. His first two records were ambitious non-breakthroughs; his third, Born to Run (1975), made the kind of once-in-a-decade impact that resonates to this day; Born in the U.S.A. (1984), did it again. Early albums such as Darkness on the Edge of Town (1978) and The River (1981) began solidifying his position as a singer and songwriter of incalculable influence.

Yet for all his critical and commercial success, Springsteen’s albums illustrated a drive to challenge his audience, as evidenced by the bleak, four-track-cassette-recorded Nebraska (1982), the introverted relationship document Tunnel of Love (1987), the E Street-less double-shot of Human Touch and Lucky Town (1992), the parched, acoustic The Ghost of Tom Joad (1995), the folk/New Orleans-flavored We Shall Overcome: The Seeger Sessions (2006), and the lush variety show Working on a Dream (2009).

In 1999, after a decade apart, Springsteen reconvened the E Street Band; in 2002 he released The Rising, an attempt to make sense of 9/11, and followed it in 2007 with Magic, an attempt to make sense of its complicated aftermath. The band has since remained a freight train, as active, prolific and resonant as at any point in its past. Yet in all shapes — in arenas and stadiums, in New Jersey and across the world, in quiet houses in January — Springsteen’s music has strived to explore the crossroads of escape and redemption and the hard realities and cold compromises of American life — as well as the paramount need to keep hold of hope at all costs. “I can not promise you life everlasting,” Springsteen shouted throughout the 1999 E Street Band reunion tour. “But I can promise you life — right now!”

A 1999 Rock and Roll Hall of Fame inductee, Springsteen has sold more than 65 million albums in the U.S. and 120 million worldwide. He’s won 20 Grammys, an Academy Award, been a recipient of the Kennedy Center Honors and performed at halftime at the Super Bowl.

AARP is the nation’s largest nonprofit, nonpartisan organization dedicated to empowering people 50 and older to choose how they live as they age. With a nationwide presence and nearly 38 million members, AARP strengthens communities and advocates for what matters most to families: health security, financial stability and personal fulfillment. AARP also produces the nation’s largest circulation publications: AARP The Magazine and AARP Bulletin. To learn more, visit www.aarp.org or follow @AARP and @AARPadvocates on social media.