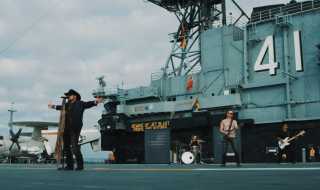 Hollywood, California (The Hollywood Times) 5/16/2019 – “We have all our fun songs in country music and our party songs, ballads, and to me this is one that hits the heart muscle for people.” Brodie Stewart told The Hollywood Times in a phone interview.

Shot on the flight deck of the USS Midway Museum and at the Flying Leatherneck Aviation Museum in San Diego, “Born American” is a patriotic, yet countryfied rock n’ roll salute to all those in our military who have served. It features both active and retired U.S. military personnel prominently throughout the video.

“The moment we finished this song we knew we had something special,” Stewart acknowledged. “It was our opportunity to give back to those who deserve it the most. Having Colt Ford on the track was icing on the cake! This video is dedicated to our true heroes, the U.S. Military, both active and veterans! Thank you for your service! Amen!”

On his debut album “Born American”, Brodie teamed up with guitarist/ producer/ songwriter Adam Shoenfeld (Jason Aldean, Tim Mcgraw, Luke Bryan, Keith Urban) to co-produce and play on the album along with several top players, including working with one great engineer Aaron Chmielewski in Nashville.

THT: Is this your first video?

Brodie Stewart: “No, I have done others, but this one is special. I am carefully working on pushing this thing as hard as I can.”

THT: How was it filming it aboard the USS Midway?

Brodie Stewart: “It was pretty amazing, to be honest. We lucked out, which was nice.”

THT: How long did it take to film the new video?

Brodie Stewart: “It was pretty much done in a full day. I believe we got there at the Midway at 5:30 in the morning and we shot  three hours there and then headed over to Miramar Marine base and a couple of other spots and ended up on the beach and had a little party on the beach after we were done. It was pretty cool.”

THT: Was that the first time you performed around military personnel?

Brodie Stewart: “No, I have done so many shows to show support for our military families for a long time now. We put a shot out to the military every night we perform.”

THT: What was the inspiration for the new song “Born American”?

Brodie Stewart: “I had a buddy of mine that came in a started writing it. Low and behold my album was almost in the can and finished and we were getting ready to go to Nashville to record it. Then he showed me the idea and I said it was too good, so I helped him finish it up and we finished up the track and took it out there and we had the song for a little bit. The inspiration of it was in the beginning where he started the first verse and I came in with the second verse and that was kind of my thing. We just finished up the whole thing together. There it is. My grandfather served, my Dad served for a short time and my bass player has a son that is a Marine and he is in the video. It has just been around us our whole lives and something that I am passionate about. It was a way to spread a message of awareness and for us to give back and deserve it the most in my opinion.”

“The biggest inspiration was we could write a song, some sort of American anthem that inspires people and makes them proud, feel proud of our country and our service men and women and our vets and their families and what they go through.”

“I grew up in the bay area, spend a lot of summers up in Red Bluff area, which is way up north. I was introduced to country back then. I moved to Roseville CA and bought a house there. Back and forth trekking, but the bay area is been my main part of living. San Diego is our home for playing great shows in that town and Moonshine Flats beach has treated up so well and given us a lot of plays, crowds are great. Perfect fit for what we do!”

THT: In the video, I see where there was some rap going on. Whose idea was that?

Brodie Stewart: “I was sitting down with a friend of mine named Nate Deaton, general manager over at KRTY in San Jose, we have been friends for some time. He mentioned that we should get this over to Colt Ford and I said that would be a great idea. Low and behold they went out golfing and Nate played it for Colt on his phone and Colt dug the song. We were playing a show together that Nate puts us together on, so Colt and I sat down and left the solo part of the song for him to do. He had a long bus ride home and took his time to write his words down and next thing you know he was in Nashville in the studio and recorded that and sent it over to me and I just loved it. We had it mixed and here we are. Very cool.”

THT: Is your new album currently out?

Brodie Stewart: “I am selling my album now at my shows, but I am debating when to have the whole album on sale on the internet and so forth. We are putting up a few songs first instead of putting the whole album up. We are working on new material. It is a different time, it’s almost back to living on your next single. Looking at it that way.”

THT: What was the first instrument you played?

Brodie Stewart: “Ironically, my first instrument was in fifth grade, I wanted to play drums and I didn’t make it, so I started playing stand-up bass. Believe it or not. I remember toting that thing around in the fifth grade and I thought I don’t know how much I am loving carrying this thing around, so I realized it was way easier carrying around a microphone than it was to carry a stand-up bass. Now I’m a singer and I play a guitar to write. I’m not big on playing guitar live.  I like getting out and slapping hands and working the stage. Every once in a while I will bring one out on a ballad on the road. I just like being a singer, a front man.

Brodie Stewart grew up in the San Francisco Bay Area, Sacramento and spent his summers in Red Bluff California. At a young age his favorite things to do were going to the Rodeo, listening to country music, singing and playing guitar. Soon enough, Brodie formed and fronted a southern rock band and had the good fortune of touring the country opening up for big artists in front of sold out arenas. His band even charted on Billboard. With his southern rock roots, Brodie returned to what he loved the most, country music.

While working on tracks for his own band Brodie also wrote and produced songs for various other artists such as “Sweet Isabel” recorded by Enrique Iglesias for his (Interscope Records) Release entitled “Insomniac”. Shortly after placing Sweet Isabel with Enrique, Martin Kierszenbaum (President of Cherrytree/Interscope Records) signed Brodie to a song/production deal to the label. Quickly following, Brodie signed a publishing deal with (Warner Chappell Music Publishing). Since that time Brodie has written and produced several tracks for various artists.

When asked about his current album Brodie states: “I’ve found my place in Country Music where my heart has always been. The great lyrics, honesty, passion and one kick *** party is what it’s all about!”