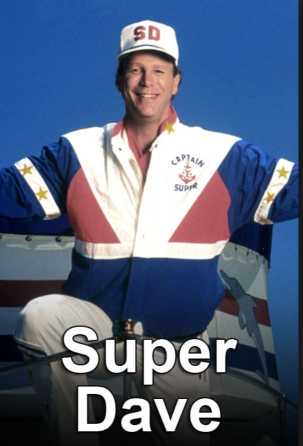 The brother of Bob Einstein says the comedy veteran known for “The Smothers Brothers Comedy Hour” and “Curb Your Enthusiasm” has died. He was 76.

Einstein’s younger brother, filmmaker and actor Albert Brooks, posted a tweet Wednesday in which he said Einstein “will be missed forever.”

Details of Einstein’s death were not immediately available.

Super Dave Osborne was a character created and played by comedian Bob Einstein. Einstein’s comedic depiction is of a naive but optimistic stuntman who frequently appears injured when his stunts go spectacularly wrong.

His signature logo, a drawing of his head in a crash helmet directly atop a pair of shoes with no visible body, was from his most iconic and early sketch “Balloon Ball”. The “stunt” consisted of his standing in a hole in the ground reciting “balloon ball” as a repetitive mantra which was supposed to imbue him with the ability to not be harmed by anything, as a mobile piledriver rammed the top of his head. When pulled out of the hole, he was as his eventual logo depicted: his helmeted head sitting directly atop his running shoes, the whole of his body supposedly compressed between shoes and neck (“…I’ve got my balls in my throat. Can you get me out of here please? I’m in pain, okay?”).

Super Dave is often accompanied on his various exploits by loyal friend, sidekick and assistant stunt coordinator Fuji Hakayito (comedian Art Irizawa), and his segments introduced by former sportscaster/actor Mike Walden[1]. It is usually left to Fuji to set in motion whatever stunt Dave is performing. Super Dave runs the fictional “Super Dave Compound”—a combination resort, theme park, learning center, and anything else needed for the plot-line of a particular episode. Many of his misadventures were based on demonstrating various aspects of the compound.

Trademark components of the Super Dave character include his frequent thumbs-ups, and his many uniforms – most of which include red, white and blue, yellow stars, and stripes, and are reminiscent of those worn by Evel Knievel (as he is a parody of him). He was also known for using “only Genuine Saskatchewan Sealskin bindings” in the manufacture of his safety harnesses or seat-belts (not that they ever did him any good). Seals are not indigenous to the landlocked province Saskatchewan, and are therefore part of the comedic juxtaposition predicated on the eventual failure of the stunt by being both “genuine sealskin” and from Saskatchewan.