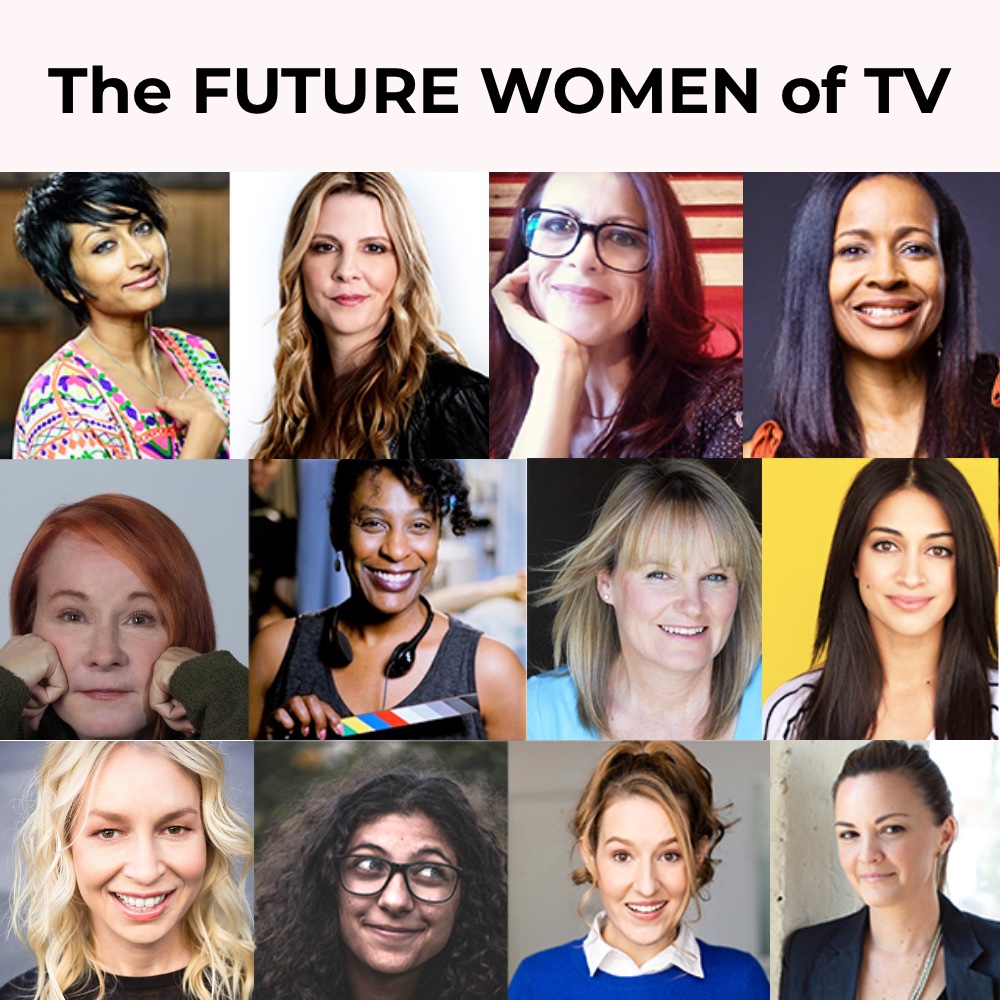 Los Angeles, CA (The Hollywood Times) 09/16/2020– Blackmagic Collective, an LA based group focused on the art and craft of filmmaking, features presentations, panels, and training sessions by expert content creators with the goal of bringing individuals together to network and collaborate on future productions. This year the group created a special program, Future Women of TV, where they selected 5 writers and 7 directors to participate in a yearlong initiative. This program was created to help these women engage with top-level executives who can help them ultimately reach their goal to their first scripted tv credit. I had the honor of speaking to a few of the writers and directors of this program about their goals, obstacles, and how this program has really helped them advance forward in their careers.

“I think this program has been really incredible because we have been networking up. We have been meeting with reps, executives, and showrunners. To be honest, when we do our little introductions, almost every single person we meet say that this is an impressive group and they have a hard time believing that we are having so much trouble breaking into narrative television. That is why I think it’s been really great as far as getting onto people’s radars which we can keep cultivating for years to come as they develop more shows post COVID,” said Sarah J Eagen; writer/actor who has a neuroscience undergraduate degree and was the head writer for a Sci Fi Fiction Podcast for Voxx Studios. She wrote two pilots that became 2nd rounders at the Austin Film Festival and also appeared on the final episode of the Big Bang Theory.

“I am really enjoying meeting the players in this town in a real intimate way,” said Kenyetta Raelyn; an LA based screenwriter and filmmaker who loves to write suspense thrillers, true crime, and period pieces. Last year she won the 2019 Spring Craft Drama Feature Competition and was a member of Meryl Streep’s the Writer’s Lab in NYC. She recently got representation with Circle of Confusion. “This is a long-term game when it comes to meeting these showrunners, agents, and reps. Once your repped, you can leverage that relationship and reach out to people. This program has given me confidence to chat it up with people and see them not as gate keepers but more as human beings that have goals and desires just like I do.”

“To expand on what Kenyetta said, quite a lot of us are not repped yet. For those of us who aren’t, this has given us so much more reach and we wouldn’t have met half of these people if it weren’t for this group. If I did not have this group this year then I would be so depressed and sad. It’s given me motivation and energy to get my elevator pitch right and to meet these showrunners,” expressed Bali director Soma Helmi; who has written over 16 shorts, web series, and has directed two seasons of the Snap Trap show called Dead Girls Detective Agency.

As the industry starts to open back up there are many uncertainties about when upcoming writers and directors will get their chance to get back on set. COVID has forced many productions to choose their producing directors over allowing up and coming directors to come on board. Plus, with production companies becoming more careful, they are only opening up a select few shows while others are placed on hold.

“It’s a terrible time to call any showrunner and say you want to come on set or come visit to get to know a specific type show because there is no way it’s going to happen for safety reasons,” explained director Sharon Everitt; who directed 125 episodes of unscripted shows like The High Court on Comedy Central. She received three Emmy nominations for her work as an executive producer on ABC’s long running Disney Christmas Special as well as directed a Disney fantasy film called Below the Root. “I think we used the time wisely, but it is incredibly painful to kind of know that you’re back to the bottom of the pile. Production companies are going to call all the directors they have previously worked with and whom they are comfortable with. All the favorites will be the first to go back to work when things start back up.”

“We are trying not to let it affect us. We have been using this opportunity to give everyone an out. For narrative episodes we have been meeting people in town, and cultivating those relationships. You know this is a relationship business so we are making real important relationships for the future. One of the people we talked to was Karen Horn, head of the diversity and inclusion at Warner Brothers, who said that there weren’t many programs for mid-level writers and directors like ourselves. So, we are pushing through and will not be inflated,” said director DG Brock; who directed crazy teen drama films for Roger Corman and has directed career-children’s episodes for The Fox Kids Network. She won best feature director at the LA International Film Festival for her film, Misadventures of the Dunderheads, which was picked up by Starz and Hulu.

“We are utilizing this down time wisely like DG said. We are meeting these people via Zoom because they are all just sitting at home in the same situation. I think it’s been really beneficial for us during COVID because our goal on the outset was to meet just one person a month. We all quadrupled that number to 5 to 10 people a month which never would have happened pre-COVID due to people’s busy lives. So as far as I’m concerned, we have been thriving in this time,” explained award winning director Kate Rees Davies; who is the founder of The New Hollywood Collective. She has shadowed director Jill Soloway on Amazon’s Transparent and is in development for an 8-part miniseries of Marilyn Monroe’s life. (Insert- Photo #7- Action shot of Kate Rees Davies)

As each of these women tackle the changes that are happening in the entertainment business and adjust their perspectives accordingly, many of them have to deal with another hinderance that is still affecting the industry, diversity.

“Being a woman in this industry is a real hinderance. We have so many barriers we have to jump through. No white male has to go onto a shadowing program or do the diversity program. So as a woman we’re in with the diversity crowd. We will be the last on the pile and the number of women that are working in this industry are only a handful which they keep bring back. They use that to up the numbers when in actuality it’s the same female directors coming back time and time again. There are some shows that are changing that, but certainly from my experience it seems it’s not moving as fast as it could,” claimed Davies.

“To look on the bright side, I like to think being a woman has given me a certain level of emotional intelligence that helps navigate some situations,” said writer Rund Shami; an assistant on Disney’s Plus show Big Shot. She has written multiple digital series that have won awards at Miami Web fest and was a staff writer for UMTV’s late night comedy show Off the Wire.

“If I can say anything positive about it, I feel like we’re a real community in this group and I think a lot of us really support each other’s success and that’s helped us out a lot,” stated Everitt.

Coming from all different backgrounds, these women have so much to offer from their life experiences. Their journeys are all unique and full of excitement. Their paths have all crossed due to this one program which has bonded them together, and has opened up opportunities to reach new heights. When asked if they had any advice for future writers/directors they all provided input.

“Don’t take things too seriously,” said Italian born writer Elisa Manzini; who is a member of the Actors Studio the playwright. She has written many features, shorts, and theatrical plays. She has two pilots that she is shopping around and is working on finding distribution for her first feature film. “We are not doing neuroscience or surgery on people. We are entertaining them so try to entertain yourself first. I learned through the years that less ego you have the more people you attract.”

“I once read that the two things you can’t be in Hollywood are dull and desperate. I thought that was good advice which lead me to having more fun. Also, don’t be shy. A lot of writers and creative people are shy and you need to get over that. Get out and meet as many people as possible,” said Brock.

“When I started writing, I was trying to emulate popular shows that I had seen and loved. I wish someone had sort of put a bug in my ears to really find what is unique to me and my perspective. The things that make up my voice that no one else could achieve, and I feel that would have helped me go a little farther,” quoted Eagen.

“To echo what Sarah said, I would like to add that at the end of the day writers need to slay on the page. You just have to spend time with your craft and I see a lot of people don’t take it serious enough. Hone your craft and do your best work on the page and it will open up million doors,” said Raelyn.

“Patience is definitely a huge part of this game,” explained Everitt. “If you don’t have the patience to deal with it then this is not the job for you. It’s going to take a thousand years to get to what you want to do. Everyone’s competing for the same job and as a director when you walk on set it’s not that everyone thinks they can do your job, but they know they can. So, it’s kind of exhausting to deal with that every single time, and if you are good at that and understand how it works then it’s much easier. If you’re not having fun then you’re doing it wrong.