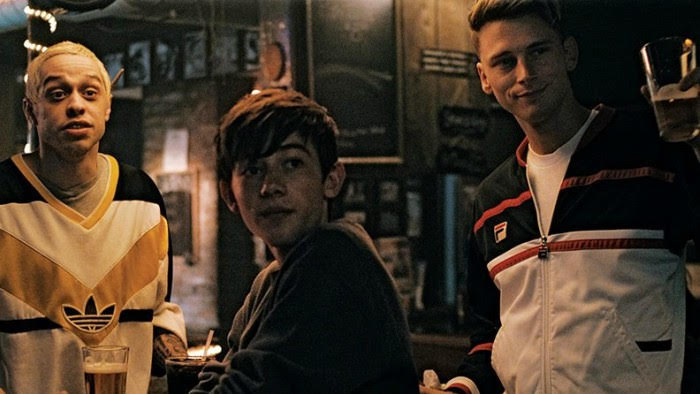 (The Hollywood Times) 3/14/20 – Big Time Adolescence is the name of the movie I just watched which stars SNL’s Pete Davidson.  Pete is not a bad guy. I don’t hate him at all. I enjoy him because he is himself. He wears his heart on his sleeve.  I mean that literally because he looks like a children’s book. To be more specific he is the giving tree. He keeps giving.  He keeps himself in the limelight despite the 50/50 he seems to get from the trolls on the internet. This is a guy that you either hate or love.  It’s like Eminem you either hate him or you love him. It’s an off and on relationship that is steamrolled by the media that spits out a headline of hate and love everyday.  This seems to be something very human. So there is nothing more relatable than Pete Davidson. A guy that everyone writes about either wanting him to go away or keep him coming back.  That is exactly how I would describe the film and my life.

The release date is the best part of this movie.  We are in desperate times and if you’re like me you’ve seen everything and are drooling for a new thing to play with.  Like a dog who can’t get the bone we just wait for our master to throw the damn thing so we can bring it back for them to throw it again.  What I mean by that is we are just stupid enough to watch this train wreck thinking it’s going to give us something. This indie film is stocked with potential but I never got what I wanted from it.  This is not coming of age this is an arrested development. This movie is stuck like a trip to the grocery store on an apocalyptic night a la the corona virus. Going to shop rite and finding nothing on the shelves and long lines to buy things we don’t need.

Machine Gun Kelly is in the movie but it’s forgettable and it seems like these guys were all on set of the motley crue movie THE DIRT and after wrapping up for the day they shot this movie Big Time Adolescence.  The direction from Jason Orley is amazing but it just doesn’t take it far enough. There’s not enough grit in this film for me which makes it surprising that it got an R rating. If this were a photo shoot it would be phenomenal but it’s a movie and that makes me say this not worth revisiting.

If I can take anything from this it’s that I should’ve gone to film school and learned how to shoot my own movies so other people can write how bad I am at making them.  Instead it is me that is writing about how bad they are at making a movie. Do yourself a favor and skip this movie if you haven’t been trolling Pete Davidson. I troll Hollywood enough to know that the star of the movie Griffin Gluck is best in Netflix’s American Vandal as is Thomas Barbusca in Fox’s The Mick.  Pete Davidson’s stand up comedy special and his recent appearance on Hot One’s youtube series where he eats buffalo wings is more entertaining. Jon Cryer is the movie too and it’s just okay. Okay is in as soon as it’s over you are going to reflect on your own life and think maybe you can do this better than they can.

This movie had a chance to make me cry and didn’t.  This just made me think about my friend Young Zee and the times we had together.  Funny how at 25 years old I had dropped out of college and met the rapper Young Zee.  “A drug-dealing college dropout becomes a mentor to his best friend — a straight-laced teen who idolizes him.”  I redirect you to checking out Young Zee’s album One Crazy Weekend which might be more fun to check out than this movie.

(Live Your Truth: An Honest Conversation with Charlamagne Tha God and Pete Davidson)