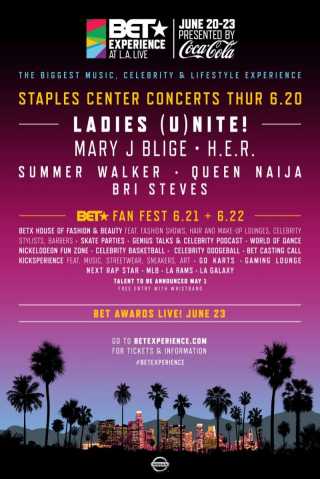 Kicking off the final day of the festival, over 500 attendees lined up in hopes of becoming the Next Rap Star. Judges Pharaohe Monch, Ruddy Rock, Snypes Murdock and Reefa Music selected the hottest up and coming talent to receive the ultimate grand prize – a chance to perform at the BET Experience in 2020, as well as a chance to perform in the 2019 Hip Hop Awards cypher. And if that’s not enough the winner ALSK walks home with a starring role in BET’s Armchair A&R, a five-episode digital series where the winner will produce a song with DJ Damage, and acquire an EP deal with Island Records.

For the first-time ever, three teams went head-to-head for the chance to win $50,000 for the charity of their choice in the BET Experience 3-on-3 Celebrity Basketball Game sponsored by Puma. The star studded talent line-up included 2 Chainz, Blue Face, Allan Houston, Sinqua Walls, Sarunas Jackson,  Miles Brown, The Game and more who played for charities including Moms of Black Boys United, Sean Anderson Foundation, FISLL, and Boys and Girls Club of Oakland. In the end it was it was the BET All-Stars team who battled it out and won the afternoon’s grand prize of $50K for the FISLL project,  a values based model for mentorship, leadership and coaching. Allan Houston shared kind remarks, thanking BET as he accepted the check on behalf of his team.

Over at the House of Fashion & Beauty, the day started off with a “She Is” panel moderated by Dana Chanel and featuring Meagan Good, Draya Michele, Shavone Charles and Stephanie Ike. The ladies got candid on how they stay true to themselves and building a legacy. Not to forgot the fellas, author Devon Franklin sat down with Van Lathan, Jacob Latimore and Orlando Baeza to bring a man’s perspective to the table on all things faith, family and career.

With the crowd engaged in meaningful and insightful dialogue, it was time to take it to the next level with hot fashions! Sprayground paraded a dope collection of flashy pieces while the legendary Karl Kani celebrated 30 years in business with an anniversary collection like no other. Keeping the crowd hype was a special performance by hit rapper Megan thee Stallion, performing her popular ladies’ anthem, “Big Old Freak”.

The show opened with “Love Scars” rapper Trippie Redd who hit the stage with high energy performing some of his popular hit singles, “Poles1469” and “Dark Knight Dummo”, which features Travis Scott and rise to popularity on Billboard’s Hot 100. The West Coast got a little taste of the South when Atlanta rapper Lil Baby came out to get the crowd hype with his chart-topping record, “Out the Mud”, which features fellow Atlanta rapper Future.

With a packed arena, Lil Yachty hit the stage with a high-energy performance that got the crowd on their feet. He performed some of his popular singles, “One Night”, “On Me” and “Get Dripped”. Everyone’s favorite duo City Girls came out to “Act Up” with the crowd. They performed a myriad of their popular singles, including “Twerk” and “Season”.

Setting the stage for the night’s headliners, the crowd went wild in anticipation for Migos. They took the stage with a set that lit the Staples Center on fire! With an icy drip you could spot from miles away, the fashionable trio performed their mega hits such as,  “Walk It Like I Talk It”, “Motorsport” and “Ric Flair Drip”, to which the audience mouthed every word.

Just went you thought the party at the Staples Center couldn’t get more lit, the night’s headliner, Cardi B  brought pure fire hitting the stage in a glittery purple body suit & fishnets, a fierce all-female tribe of dancers, and worked every angle of the stage intoxicating the audience with her sultry dance moves.  She gave the hyped house more than they could have wanted performing hits “Money”, “Drip”, “Please Me”, “Be Careful”, “I Like It”, “Finesse”, “Bartier Carti”,. She closed the night with “Bodak Yellow”, the iconic track that debuted in 2017 on the BET Experience Mainstage, and the crowd erupted.

The always inspirational annual cultural conversations known as BET Experience “Genius Talks” were sponsored by Denny’s this year and featured an exceptional group of talent making an undeniable impact on their craft and the business community. This year, Erwin Magic Johnson, Lena Waithe, Yara Shahidi, and Marsai Martin joined the series alongside  returning moderator, journalist and host of the “Unbothered” podcast on Spotify Jemele Hill, to share their knowledge, learnings and insights on how to navigate entrepreneurism and disrupt culture.