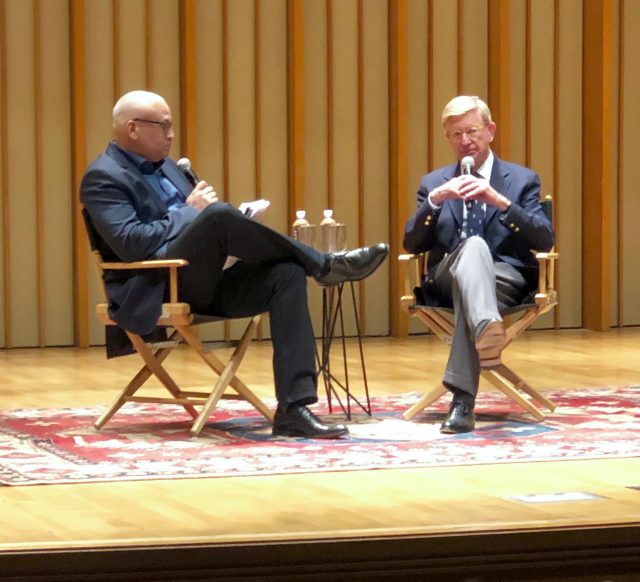 At Live Talks Los Angeles, columnist George Will spoke with comedian Larry Wilmore about his new book, The Conservative Sensibility, while clearly ignoring the reality of what’s happening today

“Conservatism is above all an acceptance of the messiness of life… Get over it!”

It was a frustrating night because what was not said was so much more important than what was said. As one of the “great voices” of modern conservatism spoke about Madisonian values and inalienable rights, the United States has become a backwards country in regards to human rights with innocent children held for-profit prison camps. Yet, George Will’s references to the current president seemed bemused and distant. When he said that Thomas Jefferson used the term ‘self-evident’ because such rights are “obvious to all minds not clouded by ignorance or superstition,” it felt remote and hypocritical. What today is self-evident to such a man and what is blatantly ignored? In person, George Will comes across as an isolated intellectual basking in historical references. He avoids the reality of a country in crisis with his shield of learning.

Live Talks Los Angeles is an ongoing service to the greater SoCal community to help expand awareness.  As an ongoing service to the greater community to help expand awareness. As a “series of on-stage conversations featuring writers, actors, musicians, humorists, artists, chefs, scientists and thought leaders in business,” Live Talks LA tend to be illuminating engagements between intelligent people. There is no question that the Pulitzer-Prize winning columnist George Will and the Emmy-award winning comedian Larry Wilmore, current host of the podcast Black On The Air, are as intelligent as any potential participant chosen for such exchanges. 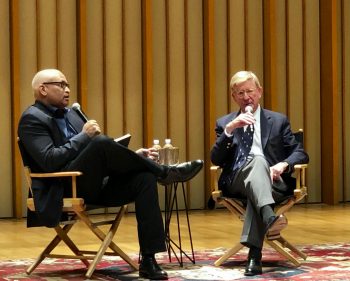 Despite this level of obvious intelligence on the stage, the conversation felt like an esoteric avoidance, a random delving into George Will’s new book. This book is a ridiculously-lengthy tome of over 640 pages entitled The Conservative Sensibility that feels remarkably out of touch with what threatens our world today. Although George Will clearly dislikes, even abhors, Donald Trump, he would not directly mention his name for the majority of the exchange or address the real issues going on in this country.

Instead, George Will lectures to us about Teddy Roosevelt and Woodrow Wilson while the constitution is violated and democracy burns to the ground. He relishes his criticism of Franklin Roosevelt’s welfare state while signing off on Trump continual decimation of our country with a shrug. When asked about FDR and his fireside chats with the American people, George Will described the President’s renowned radio talks as comfort food for a desperate populace. Making a questionable joke, Larry Wilmore then said Roosevelt was the first example of “Meals on Wheels” for hungry Americans.

When asked if Donald Trump had taken imperial control of our government, George Will laughed, then pointed out that Trump can’t even get his nominees approved for the Federal Reserve Board. Economic commentator Stephen Moore and businessman Herman Cain, Trump’s choices for the Fed seats, withdrew from consideration after sexual harassment allegations, criticism about political partisanship, and sexist comments about women. Neither candidate had been formally nominated. George Will did not delve into these facts, but he used this as an example of how the President can get nothing done in Washington.

However, he certainly can get things done at the border, and George Will chose to entirely ignore this current crisis. Although George Will claimed that the role of the federal government is to secure our rights, he failed to provide a definition of what “our” means in this context. Historically, as the land of the free, American built itself on immigrant workers showing up and doing their part. Such immigrants are the legacy of this country’s greatness because, ultimately, except for Native Americans, ever person that came to this country over the past three hundred years was an immigrant.

In September 2019, over 52,000 people, described as migrants, were being held in federal custody, the vast majority in for-profit jails and detention centers, for crossing illegally into the United States. Of those people, over 15,000 are children. Pediatric experts recently reported that these children are suffering “trauma after trauma.” In August of 2019, the Trump administration scrapped a rule limiting the amount of time these children could be held in custody, allowing innocent kids to be detained indefinitely. Despite blocks on this decision from judges and the United Nations calling for the end of such detention, nothing has changed. In this regard, under President Donald Trump, the United States has become the world’s #1 offender. Yet, George Will had nothing to say about any of this. On a partisan evening, it was entirely ignored.

When asked about climate change, George Will relied on the specious argument that science is always changing. We don’t know the final word about climate change, and he referred to the mystery of the Little Ice Age. Between about 1300 and 1870, Europe and North America were subjected to much colder winters than during the 20th century. Broken into two separate periods, scientists concluded that the Little Ice Age was caused by the cooling effect of massive volcanic eruptions. It has nothing to do with the current climate change crisis.

Moreover, George Will ignored a nonpartisan taskforce of ex-government officials that recently reported “almost weekly violations” of normative measures in place to safeguard objective research. Indeed, the taskforce further concluded that the abuse of scientific standards has now reached a “crisis point.”  Research findings are manipulated for political gain, special interests have been given improper influence, and academic scientists are targeted if their findings do not jive with Trump’s conservative ideology. Such findings are uncomfortable. Thus, they are ignored by conservative pundits like George Will. He chooses his sources quite carefully, preferring historical references like a warm glass of milk at night to the nasty realities of today.

During the question and answer period, George Will did admit that his perspective of traditional conservativism had lost hold of the Republican party. He doesn’t want leaders that Tweet and arouse passions for the sake of power, but he is not willing to make a stand. Instead, he’ll probably write another lengthy tome. In the end, he said with the conviction of a lost soul, “Conservativism is a persuasion without a party. Conservativism does not have a home.” Well, when your home has been ransacked by an Angry Creamsicle and his white supremacist thugs, maybe it’s time to admit that something is drastically wrong and take action to actually fix it. Then again, you can always write another book, cash another check, and reminisce about James Madison.