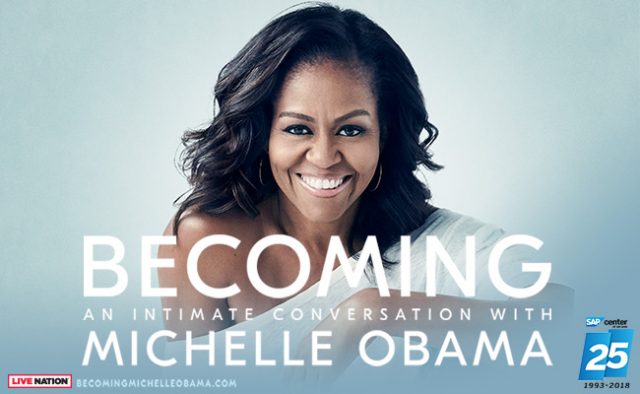 In Case You Missed It: Now This: released a video Thursday highlighting several organizations telling their students and/or members about the free ticket giveaways — including a surprise Skype call with Mrs. Obama to Democracy Prep in Harlem! Thousands of tickets will be given away.

It is important to Mrs. Obama that her BECOMING tour events are accessible to as many people as possible.

Last week, Mrs. Obama and Live Nation announced a selection of the local and community organizations who will receive free admission to Mrs. Obama’s tour. As previously announced, 10 percent of ticket inventory in each market was set aside for various organizations including, but not limited to, charities, schools, and community groups in each city the tour visits. Thousands of tickets will be given away. NowThis produced this video showcasing Mrs. Obama surprising students with the exciting news.

Attendees at Mrs. Obama’s events will hear Mrs. Obama’s honest reflections on the experiences and events, both public and private, that have shaped her, from her childhood on the South Side of Chicago to her years as an executive balancing the demands of motherhood and work, to her years spent at the most famous address in the world. Michelle Obama has emerged as one of the most iconic and compelling women of our era. As First Lady of the United States of America – the first African-American to serve in that role – she helped create the most welcoming and inclusive White House in history, while also establishing herself as a powerful advocate for women and girls in the U.S. and around the world. In candidly recounting moments from her own extraordinary journey, Mrs. Obama will also share life lessons learned and inspire people to become the very best version of themselves.

Tickets for all dates are available at BecomingMichelleObama.com. A limited number of VIP meet and greet packages with former First Lady Michelle Obama are also available.

BECOMING will be released on November 13 in the U.S. and Canada by Crown Publishing, a part of Penguin Random House, as well as in 30 languages around the world. An audio edition of the book, read by Mrs. Obama, will be simultaneously issued in digital and physical formats by Penguin Random House Audio.

Crown Publishing is a part of Penguin Random House, the world’s largest trade book publisher, which is dedicated to its mission of nourishing a universal passion for reading by connecting authors and their writing with readers everywhere. The company, which employs 10,000 people globally, was formed on July 1, 2013, by Bertelsmann and Pearson, who own 75 percent and 25 percent, respectively. With more than 250 independent imprints and brands on five continents, Penguin Random House comprises adult and children’s fiction and nonfiction print and digital English- and Spanish-language trade book publishing businesses in more than 20 countries worldwide. With 15,000 new titles, and 600 million print, audio and ebooks sold annually, Penguin Random House’s publishing lists include more than 60 Nobel Prize laureates and hundreds of the world’s most widely read authors.

Elizabeth Alexander – poet, educator, memoirist, scholar, and arts activist – is president of The Andrew W. Mellon Foundation, the nation’s largest funder in arts and culture, and humanities in higher education. Dr. Alexander has held distinguished professorships at Smith College, Columbia University, and Yale University, where she taught for 15 years and chaired the African American Studies Department. She is a Chancellor of the Academy of American Poets, serves on the Pulitzer Prize Board, and co-designed the Art for Justice Fund. Notably, Alexander composed and delivered “Praise Song for the Day” for the inauguration of President Obama.

Valerie Jarrett was the longest serving senior adviser to President Barack Obama, and is one of the Obama family’s oldest and closest friends.  In the White House, Ms. Jarrett oversaw the Offices of Public Engagement and Intergovernmental Affairs and she chaired the White House Council on Women and Girls.  Prior to joining the Obama Administration, Ms. Jarrett served as the chief executive officer of The Habitat Company headquartered in Chicago, and served as chair of several boards, including the University of Chicago where Michelle Obama served as a senior Vice President.  She also help several senior positions in city government in Chicago, including deputy chief of staff to Mayor Daley where in 1991 she first met and hired Michelle Obama. Jarrett has been Mrs. Obama’s close friend, confidante and advisor ever since.   Valerie is currently a senior distinguished fellow at the University of Chicago Law School, and a senior advisor to both the Obama Foundation and Attn. She also serves on the boards of Lyft, 2U and Ariel Investments.

Michele Norris is one of the most trusted voices in American journalism. She is the former host of NPR’s All Things Considered and Founding Director of The Peabody Award-winning Race Card Project. Norris is the author of The Grace of Silence and has worked for ABC News, The Washington Post, The Chicago Tribune and The Los Angeles Times. She is The Executive Director of The Bridge, the Aspen Institute’s program that uses narrative exchange to create connections among people of different backgrounds and perspectives.

Sarah Jessica Parker is an award-winning actor, producer and businesswoman. Ms. Parker starred as Carrie Bradshaw on the HBO television series Sex and the City (1998-2004) and served as an executive producer. She currently stars in and serves as the executive producer of Divorce which premiered October 2016 on HBO. Parker recently launched SJP for Hogarth which publishes high-quality works of fiction by both established writers and distinctive emerging voices. Her film “Here and Now” premieres in November 2018. Parker stars and her company Pretty Matches Productions produced. She currently serves as a Vice-Chairman of the Board of Directors for the New York City Ballet.  In November 2009, the Obama administration appointed her to be a member of the President’s Committee on the Arts and the Humanities. Parker lives with her husband, three children and lots of books in New York City.

Phoebe Robinson is a multi-talented stand-up comedian, New York Times best-selling author, and actress. She is best known as the co-creator and co-star of the WNYC podcast turned hit HBO series “2 Dope Queens,” which is returning to the cable network in 2019. She’s also the author of the new essay collection about dating, money, and her love of U2 entitled, “Everything’s Trash, But It’s Okay.” And if that’s not enough, she’s the co-host of another WNYC Studios podcast, “Sooo Many White Guys,” the critically-acclaimed talk show where she interviews luminaries such as Tom Hanks, Issa Rae, Abbi Jacobson, and many more. Phoebe wrote The New York Times best seller “You Can’t Touch My Hair & Other Things I Still Have To Explain,” which is a collection of essays about race, gender and pop culture. And she recently made her feature film debut this summer, starring in Netflix’s “Ibiza.” She’ll next be seen in Paramount’s film “What Men Want,” premiering in February 2019.

Tracee Ellis Ross continues to skillfully navigate the entertainment industry as an award-winning actress-producer-creative.  She can currently be seen starring in Season 5 of ABC’s Emmy, SAG, NAACP, Critics Choice, Golden Globe nominated and Peabody-winning comedy series “Black-ish.”  For her role as Rainbow Johnson in the series, as a comedic leading actress, Ross has received numerous individual accolades including winning the Golden Globe Award in 2017 and the NAACP Image Award three years in a row in 2015, 2016 and 2017. She also garnered Primetime Emmy nominations in 2016 and 2017 and Critics Choice Award nominations in 2016 and 2017. Ross uses her voice and social influence to advocate for a joyful culture of self-acceptance, inclusivity, and equity across all industries.

Reese Witherspoon is an award-winning actress, producer and entrepreneur. She won an Academy Award® for her performance in WALK THE LINE and was later nominated in that same category for WILD, which she also produced. She currently stars in and executive produces HBO’s “Big Little Lies,” with the first season winning multiple Emmy, Golden Globe, Critics’ Choice and SAG Awards. This September, Witherspoon released her first book Whiskey in a Teacup, which debuted at #1 on the New York Times Bestseller list. In 2016, she established Hello Sunshine, a media and content company dedicated to female storytelling across all platforms.

Oprah Winfrey is a global media leader, philanthropist, producer and actress.  She has created an unparalleled connection with people around the world, making her one of the most respected and admired figures today. Winfrey is an Academy Award-nominated actress, a New York Times bestseller and her new podcast “SuperSoul Conversations” debuted as #1 and has been downloaded over 80 million times to date. In 2018, Oprah partnered with Apple for a multi-year content partnership to create original programs that will embrace her incomparable ability to connect with audiences around the world. Winfrey’s projects will be released as part of a lineup of original content from Apple.

Winfrey is also a dedicated philanthropist. During a December 2002 visit with Nelson Mandela, she pledged to build a school in South Africa and has contributed more than $140 million towards providing education for academically gifted girls from disadvantaged backgrounds. Graduates of the school have continued on to higher education both in South Africa and at colleges and universities around the world. Additionally, Winfrey is a founding donor of the Smithsonian’s National Museum of African American History and Culture. In June of 2018, the museum opened “Watching Oprah: The Oprah Winfrey Show and American Culture,” an exhibit exploring Winfrey’s life and her talk show’s impact featuring artifacts from the set, costumes from her movies and interactive interviews.

In 2013, Winfrey was awarded the Medal of Freedom, the nation’s highest civilian honor. In 2018, she was honored with the Cecil B. deMille award by the Hollywood Foreign Press Association.