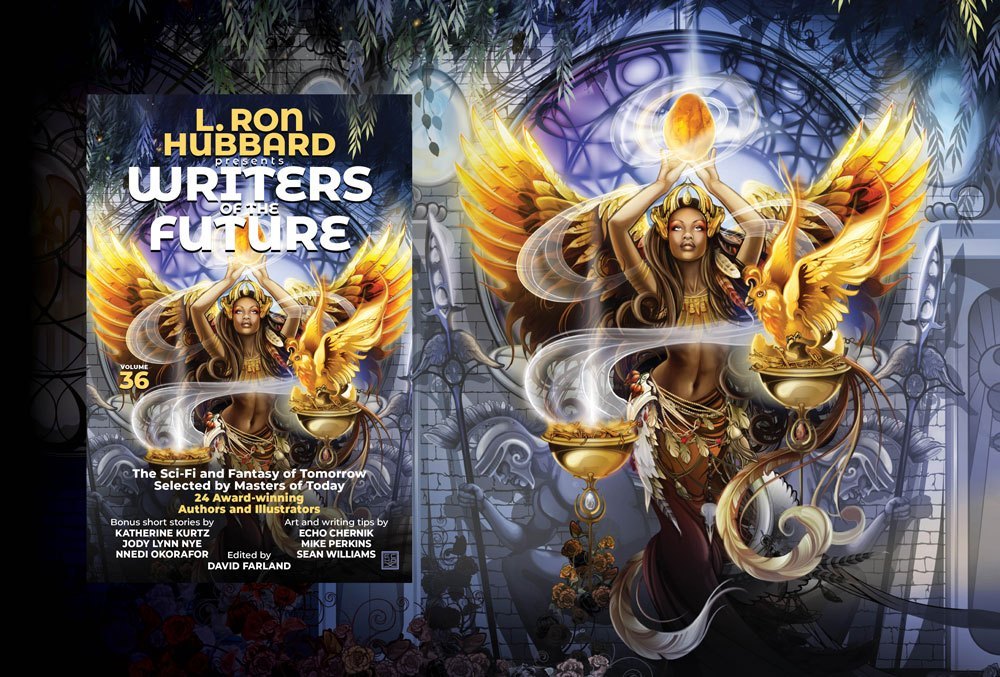 Hollywood, CA (March 7, 2020) – Author Services, Inc. and Galaxy Press will present The 36th Annual L. Ron Hubbard Achievement Awards Gala celebrating the winners of the Writers and Illustrators Contests, honoring 12 writers and 12 illustrators from around the world for their excellence in the genres of Science Fiction and Fantasy.  Who will win?  https://youtu.be/i0xUlwmy-SU

The Black Tie Invitation Only Event, with celebrity award presenters, will be held on Friday, April 3, 2020 at the Taglyan Complex, 1201 Vine Street (at Lexington Avenue, the entrance for Valet Parking), Hollywood, CA  90038.  Red Carpet Arrivals begin at 4:00 p.m.  Emceed by Gunhild Jacobs, Executive Director of Author Services, Inc., the Invitation Only Event will be catered by Divine Catering.  The Awards Banquet will start at 5:30 p.m.  Members of the General Public can watch the Awards Show streaming live from 7:00 – 9:00 p.m. PST at http://www.writersofthefuture.com   A Book Signing and Reception will follow the Awards Show in the lobby of the Taglyan Complex.  Here’s what industry professionals have to say about the contests:  https://youtu.be/g-t7Em5iVNk

Joni Labaqui, Director of the Contests for Author Services, Inc. said, “This year marks the 36th Anniversary of our Writer’s Contest and the 31st Anniversary of our Illustrator’s Contest.  On the evening April 3rd Author Services, Inc., with the help of celebrity award presenters, will present awards to 24 Science Fiction and Fantasy Writers and Illustrators of the Future that have been chosen as winners of the 2019 contests adjudicated by world renowned Science Fiction and Fantasy Writer and Illustrator Judges.  Our motif for this year’s two-hour awards show is Classical Fantasy, a type of historical fantasy drawing on ancient Greek and Roman history and mythology, incorporating a Phoenix, a firebird popular mythic creature for fantasy, beautiful and filled with symbolism.  The Phoenix is a large bird, usually with red and gold feathers, which is associated with fire and regenerated itself by burning up into ash and being reborn from those ashes, symbolizing hope and rebirth.  This year’s anthology book cover artwork is designed by illustrator Echo Chernik, featuring a Phoenix.”

John Goodwin, President of Galaxy Press, said, “One Grand Prize Writer Winner and One Grand Prize Illustrator Winner will be selected from a field of 12 Quarterly Writer Winners and 12 Quarterly Illustrator Winners, respectively.  Our contests promote the arts welcoming diversity, ethnicity, creativity and equality, with no age limits. The Awards Show and Banquet will be held in the Taglyan Complex’s Grand Ballroom, and will be followed by a Book Signing and Reception.”

Labaqui continued, “Our show will open with a performance from singer/songwriter Michele Henderson, who hails from the Commonwealth of Dominica.  Goodwin added, “Tom Doherty, Chairman of Tom Doherty Associates publishing under the Tor, Forge, Tor.com, Starscape, Tor Teen imprints, will serve as this year’s Keynote Speaker.”

Tom Doherty said, “I am planning to speak of my love of reading Fantasy since I was a kid, and its growth and change over the past 60 odd years, perhaps starting back in 1957, when I started as a young salesman.  One day Ian Ballantine, (of the groundbreaking husband-and-wife publishing team of Ian and Betty Ballantine), took me to lunch and spoke to me of his and Betty’s plans to start a Fantasy line, which I would become a sales manager of, and be part of launching one of the first Fantasy mega-bestsellers, Lord of the Rings.”

Special Guests at this year’s Gala will include Brittany Jackson, the 2007 Grand Prize Illustrator Winner and Cassandre Bolan, a 2014 Illustrator Winner.  The event will also feature an In Memoriam segment in honor of Mike Resnick, a 2017 Lifetime Achievement Recipient and a longtime contest judge.

Gunhild Jacobs, Executive Director for Author Services, Inc. will Emcee the event, and Joni Labaqui will present The Golden Pen Award and a $5,000 Grand Prize Check to the winner of the of the Writers of the Future Contest, and The Golden Brush Award and another $5,000 Grand Prize Check will be presented to the winner of the Illustrators Contest. John Goodwin will unveil the 36th edition of “L. Ron Hubbard Presents Writers of the Future Volume 36,” with a cover painted by internationally renowned artist, Echo Chernik.

This year’s live awards show will be simultaneously broadcast to a worldwide audience via the Internet streaming live from 7:00 – 9:00 p.m. PST www.writersofthefuture.com The airing time of the broadcast will vary depending on the time zone viewers are residing in.  Directly following the awards show the winning authors and illustrators will sign books at a reception to be held in the well-appointed lobby of the Taglyan Complex.  This year’s contest winners will also have the opportunity to attend workshops held here in Los Angeles one week prior to the awards show to network with the renowned writer and illustrator judges of this year’s competitions to gain valuable feedback to help them advance their careers in their chosen fields of interest.

The 12 Writer Winners of the Writer’s Contest include:

About The Keynote Speaker:
Tom Doherty, Chairman of Tom Doherty Associates publishing under the Tor, Forge, Tor.com, Starscape, Tor Teen imprints, will serve as this year’s Keynote Speaker.  Tom Doherty has been in publishing for over 60 years. He started as a salesman for Select Magazines and quickly moved to Pocket Books, where he rose to be Division Sales Manager, then National Sales Manager at Simon & Schuster/Pocket Books.

In 1970 he became Publisher of Grosset & Dunlap paperbacks.  He became both Publisher and General Manager of their Ace and Tempo divisions before founding his own company, Tom Doherty Associates in 1980, and co-founding Baen Books in 1983.

Tor has been voted “Best Publisher” by the Locus poll for the last 32 consecutive years.  Doherty has received numerous awards, including the Silver Bullet Award and the inaugural Legend Award, from the International Thriller Writers; the Solstice, awarded by SFWA, and the Skylark, awarded by NESFA for outstanding contributions to the field of science fiction; a “Lifetime Achievement Award” at the 2005 World Fantasy Convention; the Raymond Z. Gallun Award for outstanding contribution to the genre of science fiction; the L. Ron Hubbard Lifetime Achievement Award; the Lariat Award from the Western Writers of America; the inaugural “Harris Collection Literary Award,” commemorating the 250th anniversary of the Brown University Library; and many more.  He was also honored with a proclamation from the Chairman of the Committee on Ways and Means of the United States House of Representatives, for outstanding leadership in enhancing and providing literacy programs throughout the nation.

About Singer/Songwriter Michele Henderson:
Michele Henderson hails from the Commonwealth of Dominica and was born into a musical family.  Her father Lambert played the guitar and her mother Marguerite Rose nurtured her singing and songwriting skills.  It didn’t hurt that her extended ‘family’ was the village of Grand Bay famously known as the cultural capital of her island home, Dominica.

Henderson has shared billing with international stars like Green Day and The Foo Fighters at the Roskilde Festival in Denmark, headlined the Jazz Artists on the Green and Jazz on the Hill festivals in Trinidad and Virgin Gorda respectively and contributed to charity worldwide by performing at non-profit, fund raising events in London, New York and Hollywood.  She has shared the stage with a wide range of artists including Taylor Dayne, Chick Corea, Stanley Clarke, Mark Isham and Doug E. Fresh.

Henderson has recorded six albums and one DVD to date, the latest project being Home (Chez Moi).   In 2012 she formed part of a delegation of Caribbean artists who performed at the Grosvenor House during the Olympics.  In 2014 she penned what is now the official CARICOM regional anthem, edging out 68 other competitors with her winning entry “Celebrating CARICOM.”  She was awarded the Golden Drum Award for 2018, the highest cultural award on the island of Dominica.  In 2019 and 2020, she continues to perform around the world lending her talents to fundraising for various humanitarian projects.

About The Contests:
Following the 1982 release of his internationally acclaimed bestselling Science Fiction novel, “Battlefield Earth,” written in celebration of 50 years as a professional writer, L. Ron Hubbard created the Writers of the Future Contest (www.writersofthefuture.com) in 1983 to provide a means for aspiring writers of speculative fiction to get that much-needed break.  Due to the success of the Writing Contest, the companion Illustrators of the Future Contest was created in 1988.

The annual Contests draw entrants from around the globe and are free to enter.  Winners retain full rights to their work and each are given cash awards.  Grand Prize Winners receive an additional $5,000. The Contest flies out all winners to Los Angeles for an expense-paid, weeklong workshop given by Contest judges and culminates in a Black Tie Gala Awards event.

In the 36 years of the Writers of the Future Contest, there have been 428 winners and 80 published finalists.  The 428 past winners of the Writing Contest have published 1,150 novels and nearly 4,500 short stories.  They have produced 33 New York Times bestsellers and their works have sold over 60 million copies.

In the 31 years of the Illustrators of the Future Contest, there have been 358 winners.  The 358 past winners of the Illustrating Contest have produced over 6,000 illustrations, 360 comic books, graced 624 books and albums with their art and visually contributed to 68 television shows and 40 major movies.

The Writers of the Future Award is the genre’s most prestigious award of its kind and has now become the largest, most successful and demonstrably most influential vehicle for budding creative talent in the world of contemporary fiction.  Since its inception, the Writers and Illustrators of the Future contests have produced 36 anthology volumes and awarded upwards of $1 million in cash prizes and royalties.  For more information please visit www.writersofthefuture.com and www.galaxypress.com

WHO & WHAT:
The 36th Annual L. Ron Hubbard Gala Achievement Awards celebrating the winners of the Writers and Illustrators Contests, honoring 12 writers and 12 illustrators from around the world for their excellence in the genres of Science Fiction and Fantasy.

WHERE, WHEN & HOW:
Friday, April 3, 2020.  This Black event, with celebrity award presenters, is By Invitation Only, and will be held at the Taglyan Complex, 1201 Vine Street (at Lexington Avenue), Hollywood, CA  90038.  The motif for this year’s two-hour awards show is a majestic Phoenix from classical mythology with Indian and Egyptian influences in an art nouveau style.

Red Carpet Arrivals are from 4:00 – 5:30 p.m.  Emceed by Gunhild Jacobs, Executive Director of Author Services, Inc., the event will be catered by Divine Catering.  The Awards Show Banquet is from 5:30 – 7:00 p.m.  Members of the General Public can watch the Awards Show streaming live from 7:00 – 9:00 p.m. PST at www.writersofthefuture.com  A Book Signing and Reception will follow the Awards Show in the lobby of the Taglyan Complex.