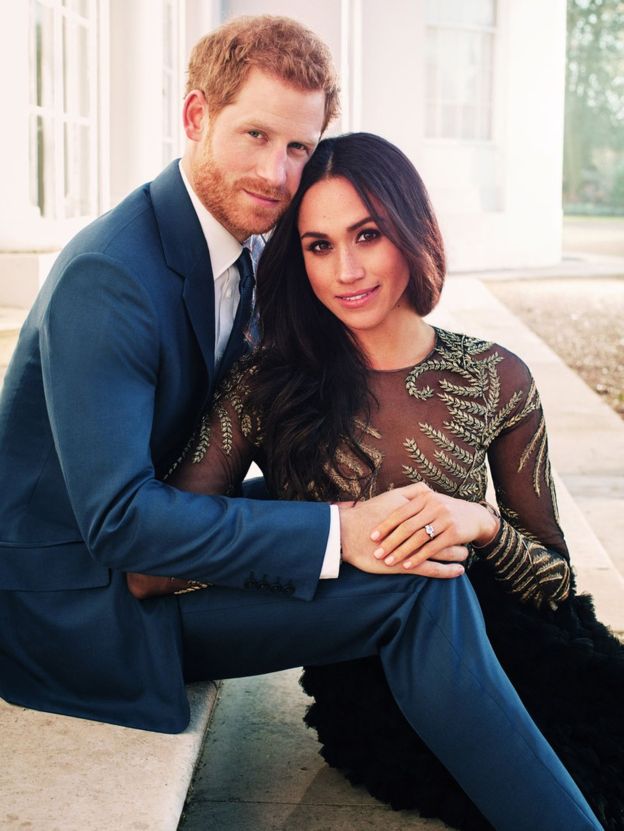 Los Angeles, CA, April 20, 2018 (The Hollywood Times)  – The countdown is on for the May 19th royal wedding of American actress Meghan Markle to H.R.H. Prince Harry!
The press is abuzz with every detail imaginable from the dress to the food to the guest list, etc. But what fascinates me most about this wedding is the people getting married and the date they have chosen to do so.  I’m happy to report that I finally caught up with world famous astrologer and life coach, Linda Joyce to get her insight about Meghan Markle and H.R.H. Prince Harry’s wedding day.
Without further ado, here’s what the very gracious Linda Joyce had to say:
THT: Are Meghan and Prince Harry a good match?
LINDA JOYCE: Yes. The best part of this up-coming wedding is that both these two-young people have had a difficult time in life. Harry lived a privileged life, but he couldn’t live it his way – he had to conform. For a Virgo that’s a very difficult thing. Part of being a Virgo is stretching the boundaries, of feeling free to be both naughty and nice. There is no bigger tragedy for a child than to lose its mother, particularly when she is very loving and nurturing. When she makes you feel that you’re the center of her world. In his own words he was lost for twenty years. And when he found love, the women he had chosen couldn’t handle his life or the paparazzi. Only when he found his purpose by trying to fulfill his mothers’ mission, by taking on his mother’s charities – that’s when he found himself. Soon after that he met Meghan. So, timing plays a big part of this union.

Meghan had her own struggles as a bi-racial woman, who looked white but had a black mother. She loved both her parents. She was bullied, but she was loved. That’s a powerful force. It helped her develop a need to help others, for a sense of justice and fairness. She is a champion of her own causes and has been involved in several before she met Harry. She was a global ambassador for World Vision and an advocate for UN Women. She used her website thetig.com, to not just talk about fashion but to include pieces on self-empowerment. The meeting of Harry and Meghan was the alignment of their struggle for self-knowledge. They had both arrived at who they were, and that journey included giving back, in fact it was their mission and a major way they connected. These were two souls who had finally found themselves and now share a common purpose. That’s powerful.
THT: What does the Wedding Chart reveal?
LINDA JOYCE: The birth of the marriage is the time of the wedding ceremony and an exact chart would be when the couple is pronounced husband and wife. Then it becomes like the birth of anything. You read it as an entity with a destiny and challenges as well as talents. The most ancient form of astrology is Horary astrology and electional astrology – you pick a time to initiate an event. Kings used to use it to know when to declare war so that they would have an advantage.

THT: How are Meghan and Harry placed in the wedding chart?
LINDA JOYCE: Harry is represented by the first house which is Virgo. He is a Virgo and Virgo ‘is’ the sign of service as well as power. However, when it’s used in a higher consciousness way, then that power comes from above, not from the need to control everyone and everything around you. Virgo is ruled by Mercury and Mercury is in the 9th house. This is the house of royalty and rulers. The Guru. He is elevated to a high position. And he will be in opposition to his family. (Mercury is opposite Jupiter in the 4th house of his family). Mercury is also at a critical degree. This marriage may put him at odds with his role as Royal.

Meghan is ruled by the 7th house which is Pisces in the wedding chart. It is in Grand Trine, that water grand trine. She will be loved by the public and idealized. That’s what Neptune does; it raises someone up to an ideal, like Princess Diana. However, there will be such demands that she be perfect. However, she is a strong woman.
THT: What details of this marriage can you share?
LINDA JOYCE: The couples mission is a desire to change the world, to make a difference and they’re both very committed to it. They have already started their journey of service by asking for donations to their chosen charities instead of gifts.

The charities they have chosen are not the most prestigious, but they need the help. Chiva: works with young people living with H.I.V.; Myna Mahila Foundation in India: empowering women and young girls in Mumbai’s slums; Scotty’s Little Soldiers: a charity to help children with parents in the Armed Forces; Street Games: A national sports charity helping young people in the U.K.’s most disadvantaged areas; Surfers Against Sewage: A Marine conservation and campaigning charity; Wilderness Foundation U.K: a social-welfare organization transforming lives using nature.
Travel is strongly accepted in the wedding chart. The 9th house of travel is ruled by Aries – the sign of vision and action. They will do a lot of traveling for their work and their causes.
The Sun is in Taurus and in their 10th house, so of course the world will be watching.
Pluto in Capricorn makes a Trine to the Sun – there is a lot of power and importance behind this union. And with Scorpio ruling the 4th house of husband’s family, it indicates that they have a lot of power. The Grand Trine from Jupiter in Scorpio to Neptune and the Moon shows that they are all in harmony over the marriage.
Their social life will be a part of their mission. This is a couple committed to a cause. Emotions are strong, flowing from the public and between each other. The 6th house of service is ruled by Aquarius which is the humanitarian sign. So, the theme is repeated. They will have very close friends who love them and protect them. Meghan will and has already transformed Harry’s life. Of course, he has changed hers forever.
THT: How will their individual strengths serve them?
LINDA JOYCE: Harry and Meghan developed their strengths before they met. They both had a difficult challenging life. In many ways they are a mirror of each other. They have found someone who understands them and shares a mission. That’s powerful.

What Prince Harry and Meghan bring to the Monarchy is a connection with the common man. They, like Princess Diana, have heart. They are not overwhelmed with image and duty like Prince William and Kate. They are freer. They will shake up the monarchy and challenge old traditions. It will cause disharmony at times, in spite of how much they are valued and loved. But the monarchy had to change to accept Meghan and it will continue to do so.
THT: How many children do you believe they’ll have?
LINDA JOYCE: Two for sure and a possible third. One will be rebellious like Harry. A bit difficult to pull in and keep to the rules. Capricorn is a strong energy and this sign rules the 5th house of children. The other child will be serious and responsible, not unlike Harry and his brother William.

THT: What challenges may arise with Venus at a critical degree?

LINDA JOYCE: Venus rules love and happiness, it also rules how the world sees them in the wedding chart and communication. So, they will be attacked and followed – to a critical degree. Their lives will be difficult and dangerous in that way. Communication between them is essential, if they don’t keep that flowing then the relationship could be in trouble. But I do believe they will. They will bond closer together the more the outside world pursues them. There could be issues with his brother. The 3rd house is not only communication but siblings. Every great love story has a tragedy, I hope it’s a minor one.
THT: What is the significance of a Grand Trine in Water?

LINDA JOYCE: Water rules emotions and spirituality. This is very spiritual. Feelings are strong between each other and between them and the world. They will be loved. They will make a difference in the world. The world will love them. And because they’re a couple it will be even greater than what his mother went through.
THT: Does Princess Diana have any influence on this couple, aside from being Harry’s mother?
LINDA JOYCE: I found myself wondering how Princess Diana’s chart would connect to Meghan’s, and I discovered many things, but the most amazing was the connection both women had to a sense of destiny and purpose. Every twenty years Jupiter and Saturn conjoin, and when they do, it ignites in a willing soul, a desire to initiate revolutionary social change. It was present when Diana was born (1961) and when Meghan was born twenty years later (1981). Add to the fact that Diana married Prince Charles in 1981 placing the Jupiter\Saturn conjunction in their marriage chart. It tells me that Princess Diana’s purpose was ignited when she married. Now Meghan will pick up the torch with Harry and carry it forward.

I think the royal couple will be a great example of how to live and love a life of purpose. They will be globally loved, criticized and adored. I will pray for their safety, their strength and their ability to carry out their destiny. They were meant to be together. They have done the impossible, thanks to Diana. A bi-racial woman is marrying the prince. It’s the future, away from separatism toward acceptance and unity. Unfortunately, that never happens without a struggle.
THT: Why is having emotional strength important?
LINDA JOYCE: It’s what gets us through the difficulties. His mother was never stopped because she had emotional strength and the support of the public. When you feel you’re doing the right thing you keep going. Emotions are what changes the world.

NOTE: That ended our interview about Meghan and Harry’s wedding, but I found myself wanting to know more about Linda herself and how she came to her calling. So I asked her; stay tuned for that part of this story – COMING SOON!
Thank you, Linda for your wonderful insight. If you’d like to know more about Linda Joyce as a person, astrologer and life-coach right now, please feel free to visit her website: http://www.lindajoyce.com.