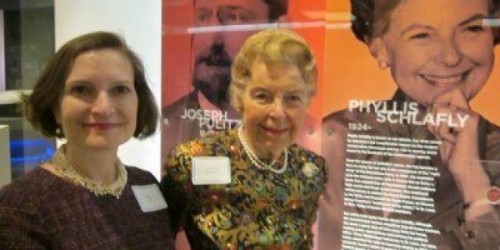 It was an hour I’ll never forget.

The stoic, composed Anne Cori Schlafly greeted me with a polite smile. She agreed to be broadcast live, so I streamed to Facebook and Instagram. I wanted to be able to include as many people as possible in this event.

She treated me with nothing but grace, dignity and respect, even after I basically let her know that I’m gay. She did encourage me on the subject of family, and from there I sensed a light nudge from her when we reached the topic of children, family and marriage. I said I didn’t feel I should be a mother, that being a teacher was rewarding, and she explained her view, which is that having a strong sense of motherhood begins with a good marriage. It was a clear hint at me that I should embrace marriage (to a man, for the purposes of having children).

She talked a lot about how a woman’s right to raise her own family and make her own decisions is deeply personal and individual to each person, and it is clear that this issue of passing on one’s values to the next generation feels very sincere. I agreed with her that individual liberty is paramount, but she seems firm in her mother’s same beliefs so there is a divergence regarding the perceptions regarding the male and female biological sexes.

She also said she believes that feminists are in the minority, that most women feel and think the same way she and her mother do about the Equal Rights Amendment. She argued that feminists see men and women the exact same way, but she never directly cited her religious beliefs. She also said Phyllis was never as calculating or a bully, that she was always polite and respectful.

“You catch more honey with-catch more flies with honey than with vinegar,” she said, smiling at her own flubbing of the old adage.

In her discourse, Anne is genuinely approachable, and I agree that it is unfair the producers and writers of the miniseries never spoke with her. Anne told me they bragged about how they didn’t want any outside influences to steer them away from their goal, which was to paint her as a victim of a patriarchy she helped to prop up and enable. Something akin to how Yvonne Strahovksky’s character probably felt in The Handmaid’s Tale series on Hulu.

I will never forget watching Phyllis Schlafly debate Betty Friedan on Good Morning America in 1976. On YouTube, of course since I’m only 30.

She was poised, well-spoken and very polite-just as Anne had described her-all the way up until the very end of the broadcast, when the gracious host was forced to conclude the debate on the subject of “homeosexual marriages”. It was here where she let slip what she thinks of gay people. People like me. According to Phyllis, we’re “perverts”. She went on to add that what “they” do “in the bedroom is private, but she very plainly stated she didn’t believe “perverts” should be afforded the same rights as husbands and wives.

Not going to lie, that hurt. But it made sense to me why she thought that way.

After all, it made “sense” to most Americans back then, and for white supremacists, it still does. It seemed very logical what Phyllis was saying, right? Considering her deeply held Christian beliefs, it’s natural she should wish to protect the family unit and homosexuals (she likely believed) diminish the importance of the roles of men and women in society. According to her beliefs:

But now what? What about Anne?

The question remains: Does Anne Cori believe that lesbians and gay men, or even Trans-identifying people are perverts who are unworthy of equal protection under the Constitution?

Anne certainly considers herself a devout Christian as well. I noticed her repeating her mother’s same arguments with respect to ERA, but we didn’t manage to get into every bullet point. She certainly holds fast to her mother’s legacy and continues to view her as the real champion for women’s rights. Equality, on the other hand, is an issue best left to individual states to manage. She felt the ERA was too sweeping, and that its title alone set up her mother to be vilified from the outset. After all, she argued that men and women are not the same, so the ERA would threaten a woman’s right to collect alimony or Social Security, or even be drafted. She told me that many amendments were offered up to allow for specificity, but the feminists were determined to have something sweeping.

Betty Friedan debated Phyllis on this, and many feminists still argue that a woman will never truly be treated equally until we are enshrined in the Constitution & Bill of Rights. The value of a woman who is a homemaker is not weighed equally against the earnings of a man in most cases because of this lack of equal protection, so therefore there must be a protection for women added to the law itself.

If there’s any one thing that we can agree on, it’s that we need to allow people the freedom to choose their own path and pursue happiness, whether it’s by becoming a mother or joining the military. We also agreed that we need to be able to converse with each other on issues while maintaining respectful communication—or we’re never going to grow above and beyond our current hate-ensconced society.