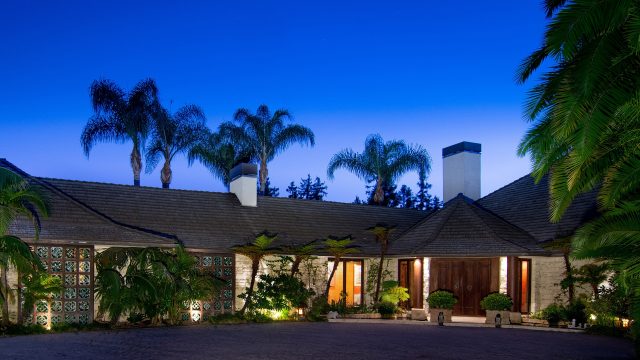 Cheryl Tiegs was America’s favorite model in the 1970s and ‘80s as the three-time cover girl for Sports Illustrated swimsuit issues, four-time covers on People and three times at Time.  Her ‘70’s posters in a white fishnet bathing suit and then her pink bikini photo solidified her role as America’s first baby-boomer supermodel. She was the first model to have her own signature line of clothing and accessories, which were sold exclusively at Sears. During the 10-year life of that business, almost a billion dollars of her merchandise was sold. Almost as beautiful as Cheryl, her Balanise-style Bel Air home is for sale at $18.5 million.

With her career taking her all over the world, Cheryl was able to pick from her own experiences how she wanted to live. When it came time to buy her own home, she found solace and inspiration in the Balinese way of life and duplicated that environment in her own Southern California home. Jade Mills and Tiffany Mills of Coldwell Banker Global Luxury Real Estate in Beverly Hills are the listing agents.

Rachel Hunter, who has graced the covers of Vogue, Elle and many other fashion magazines around the world, has relisted her Hollywood Hills home that she purchased in 2004 after her separation and subsequent divorce from mega-pop-star Rod Stewart after nine years of marriage. She is asking $2.425 million.

A Sports Illustrated bathing suit model in 1994 and again 12 years later in 2006, Hunter also starred in a number of films including La Cucina and The Benchwarmers. She began hosting her own television show, Rachel Hunter’s Tour of Beauty, in 2015 that ran through 2017.  Off shoots from her television show resulted in organized beauty travel tours and a book reviewing all the countries she visited looking for new and unique beauty tips.

Just above Sunset Strip and the Chateau Marmont Hotel, Rachel’s gated, hedged and very private 1930’s English Country Manor house has been meticulously updated but retains all of its warmth and charm. At 4,500 square feet, it has five bedrooms and five baths, a characterful living room with beamed ceiling, an arched fireplace focal point and French doors leading to a lushly planted terrace.  There is a formal dining room also with fireplace, a remodeled eat-in kitchen, two bedrooms and a bath and large laundry on the first floor. Upstairs are two more bedrooms and a large master suite with a balcony that has views over the city. Sited on just over a quarter of an acre, the lush brick-and-stone-tiled backyard features a swimming pool, jacuzzi, outdoor dining area, and a fire pit. The listing agents are Mary Swanson of Compass and Annie Challis of Coldwell Banker, both located in Beverly Hills.