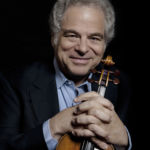 The film looks beyond the 16-time Grammy-winning musician to see the polio survivor whose parents emigrated from Poland to Israel, and the young man who struggled to be taken seriously as a music student when schools saw only his disability.

In the film, Perlman’s life story unfolds through conversations with fellow musicians and friends, including Billy Joel, Alan Alda, pianist Martha Argerich, cellist Mischa Maisky, and his wife of 50 years, Toby. The Perlmans dedicate their lives to their large Jewish family in New York City, shared love for music and continual support of young musicians.

American Masters: Itzhak is a portrait of musical virtuosity that explores themes of Jewish identity, Jewish history, humor and love.

“I wanted the viewer to experience what makes Itzhak special rather than be told so through a series of talking heads,” said Chernick. “The sound Itzhak generates comes from his heart and flows through his hands. Through this film, we come to realize how extraordinary this process really is.”

Launched in 1986 on PBS, American Masters has earned 28 Emmy Awards — including 10 for Outstanding Non-Fiction Series and five for Outstanding Non-Fiction Special — 13 Peabodys, an Oscar, three Grammys, two Producers Guild Awards and many other honors. To further explore the lives and works of masters past and present, American Masters offers streaming video of select films, outtakes, filmmaker interviews, the American Masters Podcast, educational resources and more. The series is a production of THIRTEEN PRODUCTIONS LLC for WNET and also seen on the WORLD channel.

Funding for American Masters: Itzhak is provided by Derfner Foundation, National Endowment for the Humanities, The Paul E. Singer Foundation, The Starr Foundation, and the New York Women in Film & Television through the Loreen Arbus Disability Awareness Grant.