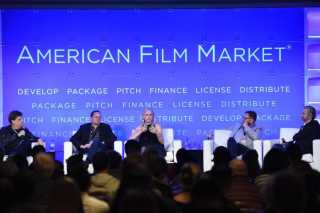 The American Film Market is the most efficient film acquisition, development and networking event in the world. Unlike a festival, AFM is a marketplace where production and distribution deals are closed. More than US$1 billion in deals are sealed every year — on both completed films and those in every stage of development and production.
Over 7,000 industry professionals from more than 80 countries converge in Santa Monica every November. They include acquisition and development executives, agents, attorneys, directors, distributors, festival directors, financiers, film commissioners, producers, writers, the world’s press and all those who provide services to the motion picture industry.
At AFM, participants can discover the entire global catalogue of available films and projects, attend 40+ world class conferences, roundtables and sessions, and connect with the independent film community’s decision makers, all in one convenient location without the distraction of a film festival.

The American Film Market is comprised of:

The Market — The core of the AFM is the market. Over 400 production/distribution/sales companies have offices at the Loews Santa Monica Beach Hotel where they meet with territorial (national) buyers from 80+ countries to acquire films, both completed and those in every stage of development and production. Many companies are also there to meet with producers who are seeking representation or production partners.

LocationEXPO — Film Commissions, facilities and government agencies from around the world participate at LocationEXPO, a four-day event held inside the AFM.

Conferences — Six, half-day Conferences give attendees knowledge and insight, and an opportunity to hear from industry thought leaders, decision makers and experts.

Writers Workshops — During four Writers Workshops, participants learn how to shape their screenplay into a compelling narrative that will resonate with studios, investors and a global audience.

Spotlight Events — Organization and companies from around the world create unique opportunities to connect and learn as part of AFM’s Spotlight Events.

The Film Catalogue — TheFilmCatalogue.com contains over 10,000 films and projects that are available from AFM sales companies.

Buyers Lounge — Located on the 5th Floor of the Loews Hotel, the Buyers Lounge is exclusively for Buyers and IFTA Members. The Lounge offers morning coffee & tea, evening refreshments and workstations.

MyAFM — With AFM’s online community, MyAFM.org, participants can search the AFM attendee directory, set up meetings and share their profile with other attendees.

Carousel Cocktails — Located at the historic Merry-Go-Round on the Santa Monica Pier, AFM’s Carousel Cocktails are four evening networking receptions that bring together producers and decision makers from around the world.