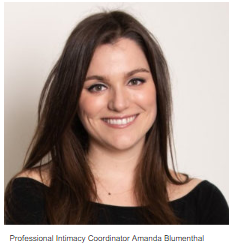 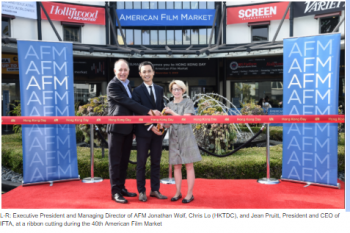 Shooting Intimate Scenes was one of the presentations THT’s reporters attended while at the 40th American Film Market at Loew’s Santa Monica Beach Hotel’s Palisades Stage. Amanda Blumenthal, the founder of the Intimacy Professionals Association held a discussion on the different ways of producing a love scene during Day 5 of the world’s largest market for film.

Blumenthal is an Intimacy Coordinator and has worked on films like, “Euphoria”, “The L Word: Generation Q”, and “Penny Dreadful: City of Angels” to name a few. She is one of the first, and busiest, intimacy coordinators to begin working full time in Hollywood in the recent wake of the Times Up and Me Too movements, which have rendered the emotional and physical safety of women in the industry paramount.  It’s now an important, growing part of the industry, with more and more productions including Intimacy Coordinators as a mandatory part of shooting.

A way of comparing Blumenthal’s job is to relate it to a stunt coordinator’s; a correlation between the two fields is that they’re expected to devise safe ways of making action happen on camera.

Stunt coordinators use various techniques that have the purpose of prioritizing the actor’s security and ensures a safe atmosphere on the film set. An intimacy coordinator is responsible for advocating the actor’s safety and uses appropriate methods to protect an actor’s mental and emotional state.

Sex, romance, and love are delicate topics, yet very important subjects that continue to be relevant in our daily lives. Amanda Blumenthal explained that “An intimacy coordinator can bring an extra level of support and protection that an actor may need in intimate scenes.” There’s a well-defined power imbalance that happens in an actor/director relationship, the imbalance comes from the pressure that the actor experiences if the coordinator’s available to intervene when something’s wrong.

The power dynamic of production & actors can be overwhelming. “Intimacy coordinators can say ‘no’ for an actor, and that’s extremely important,” said Blumenthal. Preparing for a sex scene to make it a calm, and safe experience is complicated, but an undoubtedly achievable goal.

Sex and intimacy is a private matter, and there can be plenty of feelings that arise when it becomes a matter of discussion. Speaking with potential cast members to evaluate them for qualification assures they’re comfortable with the nudity and/or simulated sex required of the part they are auditioning for. After choosing an actor, a conference is held between cast and production to start a discussion about the vision that is intended for the scene.

Blumenthal asked, “How do we talk about intimacy work? Everyone has different levels of sensitivity around language.” She explained that it’s considerate to ask the cast and crew to use appropriate language and respectful vocabulary around sex. Etiquette on set will preserve the actor’s focus in a movie’s sex scene, and intimacy coordinators will coach to educate the proper professional manners to have on set for the movie’s production and cast.

Filming a love scene is a complex job; there’s an environment that has the potential to leave lasting impressions on the film’s cast. What the movie’s audience sees will determine varying responses. Boundaries that an actor states will be enforced to protect the actor’s wellbeing, and this supervision reinforces a safe environment. Changes to the script can support the actor’s safety and keep them concentrated at work. If there’s something in the actor’s lines that they’re completely uncomfortable doing, a coordinator can arrange to make the script revised. Coordinators ensure kinks, sexual fetishes or sex work being depicted on-screen is accurately reflecting real-life sexual behavior. The energy originating from a script’s sex scene can be captured by close attention to detail. Checks for realism are needed for sex scenes; because sexual actions included in a script can sometimes be nondescriptive or vague, a coordinator will do revisions or add authentic details.

There are not enough individuals in the movie business aware of the numerous protocols that support a safe depiction of sex on camera. But growing awareness, and panels like this astoundingly informative discussion, are broadening the dialogue.

The intimacy coordinators’ job is an important part of a movie that is filming a sex scene. Everything needs correct safety protocols and standards. Actors cast to perform in a simulated sex scene are in harm’s way; without an intimacy coordinator, one can negatively be affected following rehearsals or shooting of a nude scene. An intimacy coordinator maintains the actor’s safety, they’re essential for respectful and effective communication throughout the movie’s filming process.

Learn more about Blumenthal and intimacy coordinators at https://www.intimacycoordinator.com/