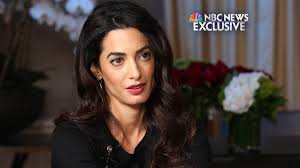 by Dr. Laura Wilhelm, LauraWil Intercultural
West Hollywood, CA (The Hollywood Times) 10/2/16 – Over the past two years ISIS terrorists have enslaved, raped, and murdered the Yazidis of Iraq because of their ancient religion centering upon a figure known as the Peacock Angel.  More than 5,000 have been murdered and at least 3,200 others are still being held in northern Greece according to a recent UN inquiry.
Human rights lawyer Amal Clooney, famously married to movie star George Clooney, represents a ray of hope.  “I think the international community should be ashamed that they haven’t done more for these refugees, ” said Clooney.

Clooney was persuaded to take the case by survivor Nadia Murad, 23, who was captured by ISIS in 2014 and raped by a dozen men over the course of three months.  Together the women are trying to persuade the world to gather evidence so the perpetrators can be tracked down and held accountable by law.

The UN and US State Department agree that this is a genocide.  The ultimate goal is to get the International Criminal Court to prosecute the crimes committed by ISIS commanders.
The ICC was set up in 2002.  Because Syria and Iraq are not members, the ICC says it cannot investigate unless Iraq invites it in or the UN Security Council sanctions an investigation.  The Security Council has taken such action only twice before, for crimes in Darfur in 2005 and in Libya in 2011.

China and Russia, permanent members of the Security Council, have previously voted against asking the ICC to open an investigation into war crimes in Syria.  Clooney says the Russians told her they were “open” to discussing an investigation.  She also plans to meet with the Chinese.

This time, Clooney’s adversary is one of the most bloodthirsty organizations in human history.  Murad, whose mother and six brothers were killed by ISIS, continues to get threats aimed at silencing her.
Murad addressed the United Nations last year and testified before Congress in Washington.  This year she was nominated for a Nobel Peace Prize and was appointed a UN Goodwill Ambassador.

Clooney also spoke at the Congressional session, saying, “Genocide doesn’t happen by accident!” in her challenge to UN leaders.   After visiting two camps in Greece, Clooney and Murad moved on to an innovative resettlement program in Germany.

Citing the Nuremberg trials of Nazi leaders after World War II, Clooney said: “I believe in international justice.  I believe it’s important that you don’t just turn the page without people being held to account.”