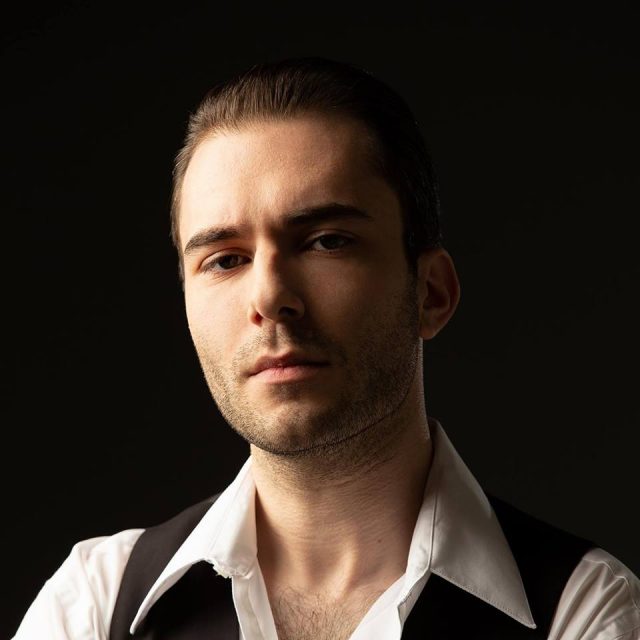 Los Angeles, CA (The Hollywood Times) 10/22/19 – Tim Novotny is best known for his grim horror films that always has an original story, yet are like mirrors that are held up to the face of humanity to give us a look at our flaws.

He started his film career in 2012, as a music composer while working as a part-time actor at Kent State University’s theatre program. Novotny is a self-taught editor and cameraman. He began shooting music videos for local artists which lead him to make short films, Twisted Fate and Syndrome. After winning 3 awards for his short film Sonny’s Guest at the 48 Hour Horror Film Competition (Cleveland), he decided it was time to start production on his first feature film, Vile Prey. Vile Prey is about corruption in society and how we are all victims of it. It is very raw and unsettling: survival of the sickest.

Novotny later won the Marshall Hawkins Award for Best Score in a Feature Film at the Idyllwild International Film Festival (2018) for the motion picture Dark Iris. Dark Iris is part of I71 Movie’s first feature film with writer/director Derek Talib. Novotny plays a sleazy character in the film.

“Horror was always a genre that would expose not only humanity’s fears, but also shows us the darker side of the human condition. I was always a bit of an outcast due to my experience with a similar subject matter, so naturally, I gravitated toward this kind of material because of its relatable social commentary and theatrical intrigue. I think that any individual with a fascination with human psychology and the macabre would find solace in watching a horror picture because it gives them comfort that the one who wrote or directed it feels the very same way that the viewer would to a certain degree. The message may be ugly, but we must confront our demons.”

Some of the hardest challenges when Novotny started in the business was scheduling with actors and trying to make a movie look as professionally made as possible with limited resources and a limited crew. Everything he’s worked on until now was done guerrilla-style with Novotny wearing multiple hats to ensure the final product was complete. Now he’s in a new stage in his career. With more resources and a competent group of individuals that are a part of his productions, things are a bit easier.

In early 2018, Novotny’s friend, writer/director Eric Widing him a script for “Ragmork”. He played the lead character, Viktor Graves. It is a story about a young man who after a suicide attempt, leaves the city to live in his old family home in the country. There he is attacked by a ferial man whom he ends up killing which causes him to experience strange and haunting things. It’s a story about madness, isolation and, escaping from society. It is also a story about depression; something Novotny has been acquainted with since his childhood. This Poe-esque script is dark and psychologically twisted.

Novotny is taking his craft to the next level by directing the upcoming film, “Gemini” a 70s American Mafia Film. The film is loosely based on true events and is essentially Novotny’s cinematic love letter to early Scorsese and Tarantino films.

Writer Thomas James has a style that resonated with Novotny. “The script was familiar territory to me: bizarre and villainous characters, scenes with graphic violence and dialogue that lingers in your head long after the credits roll. I think this project will be a perfect opportunity to get new audiences outside of the horror realm and to showcase new talent. It’s a win for everyone involved the way I see it.” – Tim Novotny

“I’ve been itching to do a gangster picture for quite some time. My writer friend Thomas James brought the script to my attention and I was hooked after the first page. It was a take on gangsters that I’ve been dying to see. The characters in this are not watered down in any way, they are straight up primal. I wouldn’t call it a total gear switch in terms of the content, as it is a horror story in some ways. It is, however, a shift in how I make films. The film will have a richer cinematic look than my previous work as well as a powerful cast.” – Tim Novotny

Gemini is about a young woman named Madeline who is trying to rebuild her life in New York after losing her husband in the Vietnam War. She ends up getting a job with one of the most notorious crime families in the mafia. It’s a story about getting mixed up with the wrong crowd. Gemini has content that will satisfy both mafia buffs and horror fans. It’s also a story that hits close to home for Novotny with his Italian/New York heritage in several ways.

In the upcoming months, Novotny will play a creature for the first time on screen in the anthology film, “10/31 Part 2,” directed by Tory Van Buskirk.